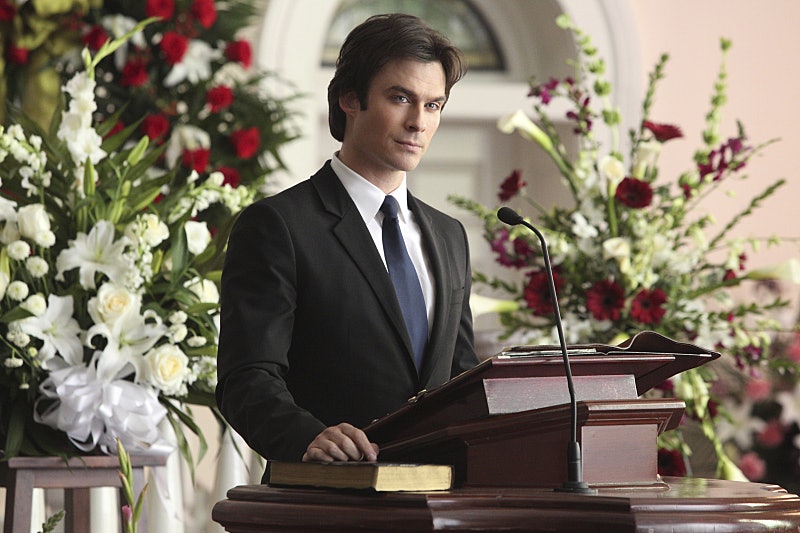 Do you hear that? It's the sound of a million Vampire Diaries fans gasping at the realization that Damon and Stefan's mother Lily Salvatore is still alive and trapped in an alternate 1903 prison world. Because that's right, people — there's apparently more than one prison world out there. A fact that Kai just so happened to mention only when his life was in jeopardy. (Seriously, way to bury the lead, dude.) But let's back up for a minute.

You see, Kai's faux merge with Luke still wasn't going all that well. That is, unless you consider coughing up blood a good sign. Luckily, all Jo had to do was agree to let Kai absorb her magic (without the threat of dying this time for some reason) and all would be right as rain. The thing is, Jo wasn't really too keen on helping a brother who tried to kill her only a few short weeks ago. Which, fair enough. That's when Kai decided to unload a massive bombshell by mentioning that if this kills him, his death would not only wipe out their entire coven, but also destroy all of the existing prison worlds. Worlds. As in more than one.

Cut to a now magically-powered Bonnie suddenly being thrown into Mystic Falls circa 1903. And while our beloved Bonnie did manage to make her way back to the present day (yay!), she came face-to-face with a very well dressed woman before her departure. And it just so happened that she was able to catch the brief interaction on film. So after a sweet, heartfelt reunion between her and her favorite pancake buddy, Bonnie showed the footage to Damon, who revealed that the mystery woman was (drum roll, please)… his mother.

Honestly, I'm still not over it, you guys. I mean, during all of these years Mama Salvatore has been alive and well? That is mind-blowing stuff right there and sets this series up perfectly for its next great adventure. (Let's get #SaveMamaSalvatore trending, OK?) However, this little revelation still raises a ton of brand new questions. Why was she placed in a prison world to begin with? Who put her there? Was it their father? Does this mean she's a witch? I need to know, Julie Plec?

All will be revealed eventually, I'm sure. But in the meantime, let the freak-outs commence because there's a big family reunion coming our way.