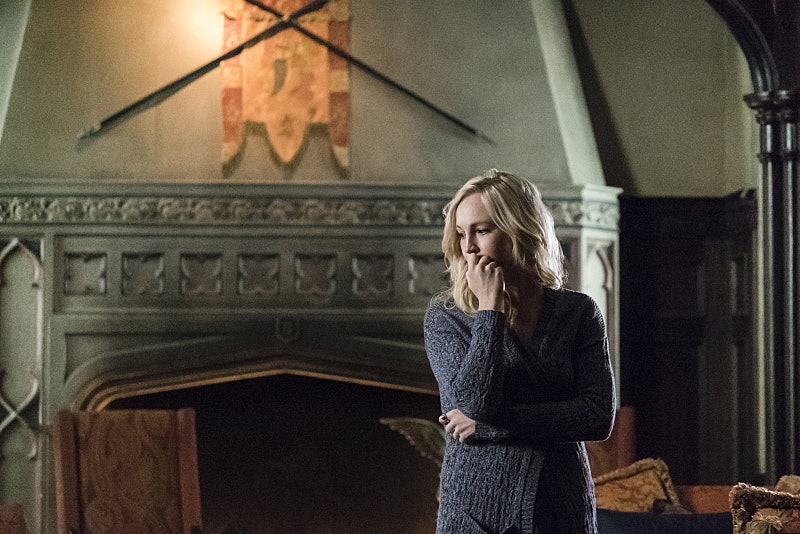 Grieving over the loss of a loved one is always a hard thing for anyone to have to deal with, however, the sorrow has to be doubly hard when you're an immortal. You become so used to idea that life can go on forever, that when a loss actually occurs it's bound to hit you pretty hard. This is how I imagine our poor girl must be feeling now: Caroline's mother Sheriff Forbes has died. As beautiful as their goodbye ended up being, it'd be naive to think that there won't be at least some repercussions that take place in the aftermath of it all. But how exactly this death will impact Caroline is a question Thursday's Vampire Diaries episode "Let Her Go" seeks to answer.

We all know that Caroline has always been a beacon of strength and positivity throughout her entire arc on the series. But in light of this recent tragedy, viewers may be seeing a whole new side to Miss Forbes in the not-too-distant future. According to the episode synopsis, "While spending the day with Caroline, Elena grows concerned when she starts noticing a strange change in her behavior."

Umm, anyone else feeling a little uneasy right about now? First of all, Caroline should never change anything about herself because she is perfect in every way, shape, and form. But most importantly, if the change is prominent enough for even a usually self-involved Elena to notice, then you know it's gotta be pretty serious. (Quick, someone give this girl a hug, Stefan.) Either way, this news isn't exactly comforting and could lead to some pretty drastic measures that could leave this beloved character shedding more than just tears. Such as…

Turning Off Her Humanity

Caroline and her mother shared one of the most important relationships on this show and now that Liz is gone, that's bound to leave a big gaping hole in our hearts. In fact, it may end up being too much for Caroline to bear. And how does a vampire cope with overwhelming human emotions? They turn them off. Well, not all of them do, but that seems to be the growing trend among this Mystic Falls bunch. Sure, it's not the smartest thing to do and it's something Caroline would normally advise against, but depending upon how much pain she's in, she may figure this is her best option to help relieve the heartache.

Rejecting Her Feelings For Stefan

Though they shared a very sweet and long-overdue kiss last week, the loss of her mother may push Steroline back a few paces. For all we know, she could end up associating their romance with Sheriff Forbes' death — and perhaps even resenting the kiss entirely since it's part of what kept her away from her mom during her last moments of consciousness. When you're in a lot of pain, it's easy to lash out in anger at those you care about most. And unfortunately, that makes Steroline the perfect outlet.

Going On a Killing Spree

Alright, I confess, this one seems like a pretty big reach, even for a thoroughly depressed vampire. Caroline is way too good natured to let something like this completely alter her behavior and beliefs… right? Then again, her bloodlust may be the only thing she's able to feel these days. So at this point, anything is possible.