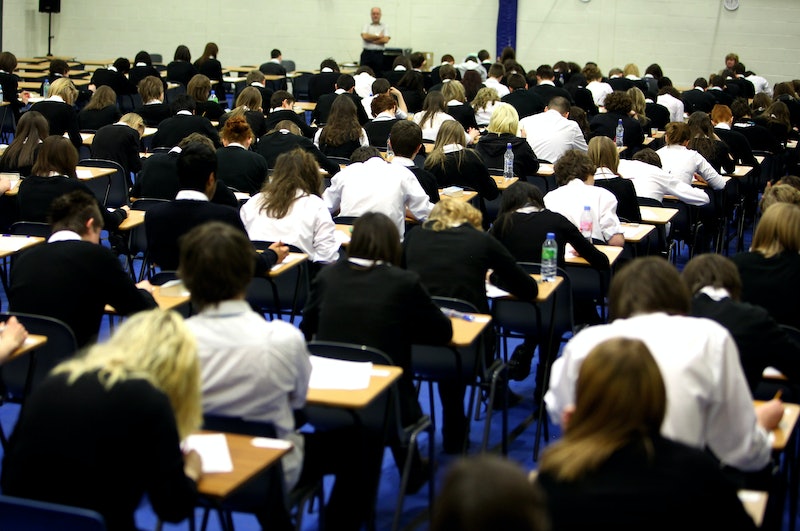 While you might have harbored fervent midterm-season wishes in high school that your AP classes would somehow disappear into thin air, you probably never thought they actually would. But somehow, one state is actually looking at the potential erasure of Advanced Placement United States History (APUSH), an elective offered throughout the country. Apparently not everyone is a fan — on Monday, an Oklahoma House committee voted to scrap state funding for APUSH, claiming the courses violate a law that gives states total authority over course curricula.

That's right, senators voted along party lines — 11 to 4 — to eliminate state funding for the advanced history classes. Republican senators insist that they should have more control over the content of public school classes. Republican state representative Dan Fisher, who spearheaded the bill to pull the funding, said the course shows too much of America's "bad" side. Essentially, the argument is that APUSH isn't patriotic enough.

"In essence, we have a new emphasis on what is bad about America," Fisher said. According to him, the current APUSH curriculum places too much emphasis on "robust analyses of gender and racial oppression and class ethnicity and the lives of marginalized people," where it should be focusing more on "America's founding principles of Constitutional government." The current mode of instruction, Fisher said, makes America out to be "a nation of oppressors and exploiters."

The bill, HB1380, addresses what Republican Oklahoma senators say are unfortunate changes made to the APUSH curriculum when the CollegeBoard redesigned it last year. Instead of including material from speeches by the last three Democratic presidents, their ideal course description would include additional material from the words of Ronald Reagan and George W. Bush. Here is the bill's suggestion for reform:

Beginning with the 2015-2016 school year, the Board shall not award any grants to school districts or make any expenditure of state funds as authorized pursuant to this section ... for the Advanced Placement United States History course until the College Board changes the framework for the course and reverts back to the course framework and examination that were used prior to the 2014-2015 school year.

And here are the final words of the bill:

It being immediately necessary for the preservation of the public peace, health and safety, an emergency is hereby declared to exist, by reason whereof this act shall take effect and be in full force from and after its passage and approval.

Did you get that? "An emergency is hereby declared to exist." Oklahoma has declared the current state of the APUSH curriculum to constitute a real live "emergency."

This legislation is far from being implemented practically in Oklahoma's high schools, but the concept is present enough that it might serve us well to compare this radical proposal to others we've seen in the past. How else have American legislators tried to tweak the realities of our world? Here are four things Oklahoma's most recent bill reminds us of.

In 1925, high school science teacher John Thomas Scopes was tried and convicted for teaching evolution in violation of a Tennessee state law. At the time, the law prohibited anyone from "teach[ing] any theory that denies the story of the Divine Creation of man as taught in the Bible, and to teach instead that man has descended from a lower order of animals." Such laws have since been struck down, but the trial made for a huge spectacle, national news, and eventually a U.S. Supreme Court case.

Several state legislatures have tried to alter or reject state science standards recently because they don't want their teachers to teach students about climate change. The Next Generation Science Standards have been opposed by the House in Michigan and Wyoming, but these states' anti-NGSS bills ultimately died. The standards were rejected by the West Virginia Board of Education, whose state school board member Wade Linger said he doesn't believe human-induced climate change is a "foregone conclusion." The state altered the standards before they were even adopted.

An increasing number of schools are teaching students just to stay away from sex without educating them about safe sex practices. Abstinence-only classes make up almost a quarter of all sex ed in America. Since 1998, the federal government has allocated a whopping $50 million per year to states to support these programs. In October, the Gilbert Public Schools Board in Arizona voted to remove pages from a biology textbook that discussed contraception. Why remove the pages? Because they violated a state law that said education has to prioritize adoption or childbirth instead of abortion. (Note: contraception is not abortion.)

In October, proposed changes to the APUSH curriculum in Jefferson County, Colorado, favored "patriotism" over information that might "encourage or condone civil disorder." In response, hundreds of Colorado high school students staged walkouts. But today, the president of the Jefferson County School Board announced that they would not pursue an APUSH redesign.