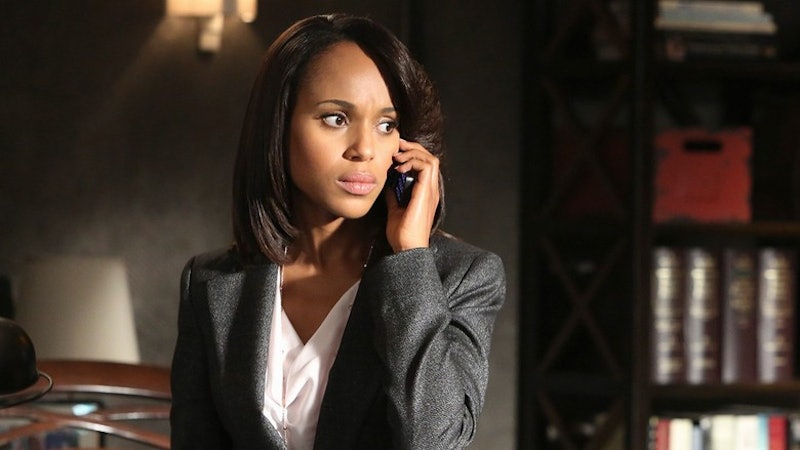 Obviously, Scandal is not meant to be trading in realism — I mean, if it were, Fitz and Olivia's relationship would have been exposed years ago given how many people already know about it. Still, the moment that Olivia Pope started speaking Farsi on tonight's Scandal I had questions. Because how plausible is that, really?

There's no question, of course, that the scene was amazing. Olivia Pope is about to be sold to the Iranians where she will undoubtedly face torture and a slow, eventual death, but instead Olivia manages to trick both her kidnappers and their buyers. She ascertains that kidnapper Gus does not speak Farsi and then uses her command of the language to trick the Iranians into thinking that the kidnappers are planning a double cross and the kidnappers into think she's overheard the Iranians plotting the same. And as a result, the deal is called off and Olivia Pope buys herself another day.

But as awesome as the scene was, is it really plausible that Olivia Pope speaks Farsi?

Let's consider. On the plus side, we have seen Olivia Pope speak several languages over the course of the series, including at least one dialect of Chinese. As a woman who's business it is to know everything and to be able to help her clients with anything, speaking languages (especially unusual languages) is undoubtedly to her advantage. However, there is a definite limit to the number of languages people can learn. Especially since Farsi was probably not offered at any of Olivia's boarding schools and her post graduate life seems to have been mostly taken up by partying until transitioning to running Washington DC. But maybe she was studying random languages during that time in order to keep her brain busy?

I suppose it is possible that I am overanalyzing this whole thing. I mean, I certainly don't watch Scandal because I'm looking for gritty realism. Still, when it comes to Olivia Pope, I do like to pretend that she's real because everything just seems so much better when you do. So when they cross that threshold into completely unbelievable it's disappointing. Because even though it would be nice to believe that we live in a world where people become conversationally fluent in Farsi as a matter of course, I just don't believe it.