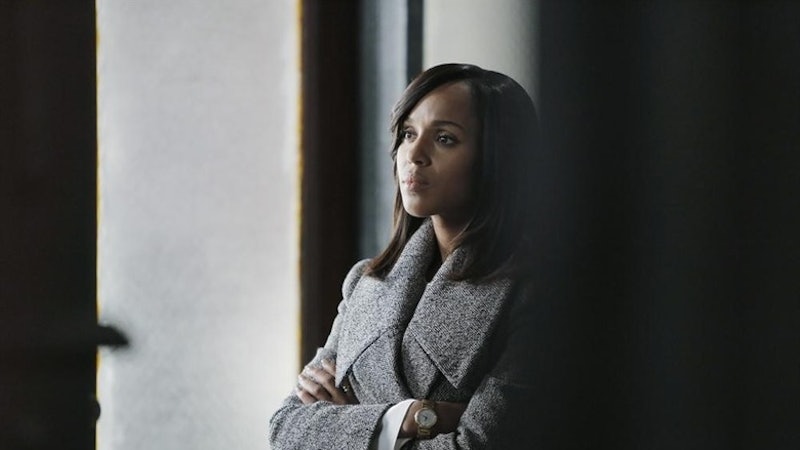 So the only reason I am not completely furious about the fact that Olivia is still a prisoner instead of ruling the world is because speculating who has her is just too ridiculously good television to forgo. Which leads us to the question of who really kidnapped Olivia Pope? Because whoever this Ian guy is, he is clearly a formidable wild card.

Putting "Ian" (presumably not his real name) in the room with Olivia was pretty genius move, especially after she revealed herself to be more than your average kidnapping victim during her abduction. After all, what better way to gain her trust and find out if there was anything else they needed to know or to manipulate her than to gain her trust by posing as a fellow victim? In fact, that might be the very reason that "Ian" never revealed his face during Olivia's abduction. They might have been planning this maneuver all along.

But whatever inspired this stratagem, the fact remains that this group is clearly a force to be reckoned with. So who are they? Are they mercenaries or part of their own group trying to blackmail the president? And what it the ultimate objective in killing Olivia Pope.

Based on next week's promo, it seems likely that Olivia's kidnapping really was orchestrated by certain high level operatives in the Republican party, but as always, you can never trust that anything in Scandal is what it seems. Was Olivia really taken by her father, using her to play head games with the federal government? The operatives are certainly top notch enough. Or was she maybe taken by some of the mysterious people he alluded to protecting her from? That would make them true unknowns, which is almost too nerve wracking to contemplate.

And even if the Republican party was the mastermind behind the abduction, that still leaves the question of who all was involved. How influential was Andrew? Or Elizabeth North? Was Mellie secretly involved?

There are just so many questions. But one thing is for sure: next week can't come quickly enough!