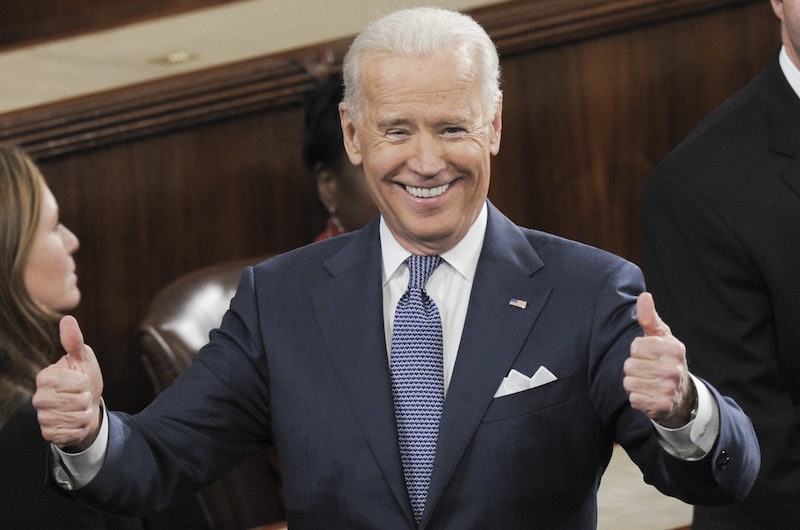 While no Democrat has announced serious consideration of a 2016 bid — though Hillary Clinton seems like a shoo-in for a presidential run — there are certain indicators as to whether a politician is leaning toward running or not, the most obvious being his or her travel schedule. Taking that into account, Vice President Joe Biden's trip to New Hampshire next week will mark the third early-voting state he has visited in as many weeks, following stops at Iowa last week and South Carolina on Wednesday, further stoking chatter around a Biden 2016 run.

According to the White House, Biden will travel to New Hampshire on Feb. 25 to tout the Obama administration's economic policies in a speech at Concord, then highlight President Obama's free community college proposal during a roundtable discussion aimed at encouraging more Americans to go to college.

Though his visits have led to speculation about 2016, Biden has insisted that they are strictly vice presidential duties. When asked in Des Moines, Iowa about his schedule littered with early-voting states, Biden told reporters:

I’ve been here a lot, I have a lot of friends. I’m going to see some of my friends [who] are still in the legislature, and they’re here today. But no, I’m not doing any organization, if that’s what you mean.

But the Vice President also had advice for 2016 presidential hopefuls in his party. In a speech at Drake University in Des Moines, Biden urged them not to quash the administration's hard work. Without specifically naming a likely candidate, he said:

Some say that would amount to a third term of the president. I call it sticking with what works.

Heavy speculation has surrounded some of Biden's fellow Democratic lawmakers, chief among them Clinton — obviously — and Sen. Elizabeth Warren. Clinton seems mere inches away from hiring campaign staff, and Warren, despite having repeatedly insist that she was not running, has drawn huge support among many Americans who still long for a Warren 2016 bid.

In fact, Warren's progressive clout is so large that Clinton, the presumed frontrunner, reached out to the senator in a seeming effort at developing an economic platform that could resonate with the Democratic populist wing and working class voters without alienating supporters in the corporate sector, reported the New York Times.

Amid the excitement surrounding a female presidential candidate, Biden attempted to stymie rumors that he was testing the presidential waters himself. He told reporters that his decision would ultimately be that of "family personal," one that he would make at the end of the summer. But that hasn't detracted those attracted to Biden's political sway among the working class. Chair of the New Hampshire Democratic Party Raymond Buckley told CNN:

[Biden] can talk to a segment of the electorate that is more blue-collar, more working class, one that he really resonates with... Whether he runs or not, I hope that he has a very full schedule of travel. That is up to him to decide, if he chooses to run, I am sure he will run an excellent campaign.