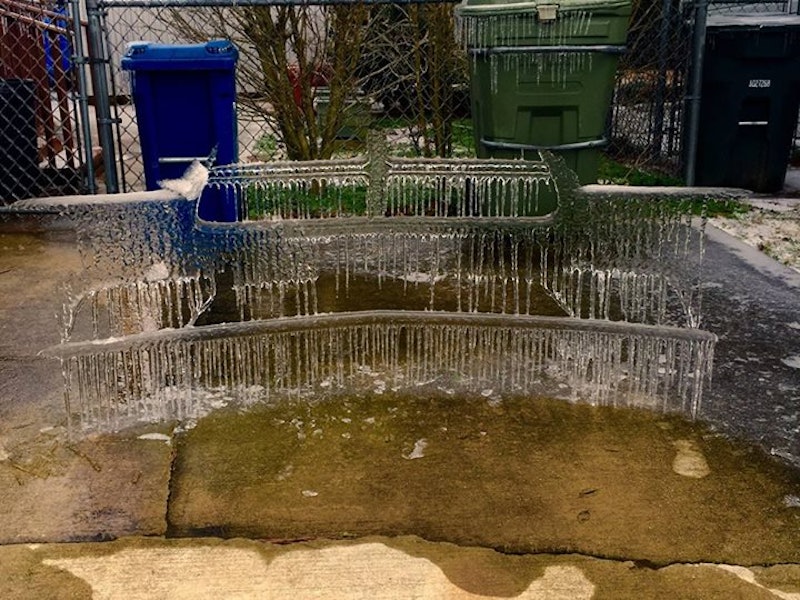 It feels like most of the eastern United States is one giant icicle right now. In North Carolina, which was hit with a hazardous ice storm this week, conditions are so bad that cars are leaving behind ice skeletons after pulling out of parking spots. These spooky-looking skeletons are essentially ice sculptures of car bumpers, and look like something an ice sculptor might create for Ford's annual holiday party.

Two different residents first noticed these icy bumper skeletons earlier this week outside the Vidant Medical Center in North Carolina. The observers were walking through the visitors' parking lot when they noticed the frozen shell of what looks like the front of a Jeep. Each one snapped a photo and sent them in to North Carolina's WITN news channel. One of them shared their theory for the mysterious ice skeleton with WITN: The Jeep owner turned on the engine and let it warm up, which melted the ice encrusting enough to be able to separate from it, but since there was so much ice, and it was attached firmly to the ground, an ice shell remained when the vehicle pulled away.

Can you imagine how much ice must have been covering that Jeep? And the entire region?

Earlier this week, a massive ice storm blew through the eastern region of the U.S., from New England to the Carolinas, as well as parts of the Midwest and even the South. States of emergency were declared from Washington D.C. to Mississippi. But North Carolina saw some of the most treacherous conditions, as Governor Pat McCrory advised residents to stay off roads, saying at a press conference, "This is not your typical North Carolina winter storm."

On Tuesday, the storm left an estimated 35,000 in North Carolina without power and at least one died in a weather-related car accident. A 19-year-old woman was driving down N.C. Highway 561 when she hit a patch of black ice and skid into an oncoming car. Governor McCrory warned at a press conference on Wednesday:

Many of the major highways are greatly improved, but many of the secondary roads throughout the state are still icy and very, very hazardous.

And it seems it wasn't just the roads that were icy, but the cars themselves. So far there have only been reports and evidence of two car skeletons, but if these unearthly low temperatures continue, then we can probably expect to see more.