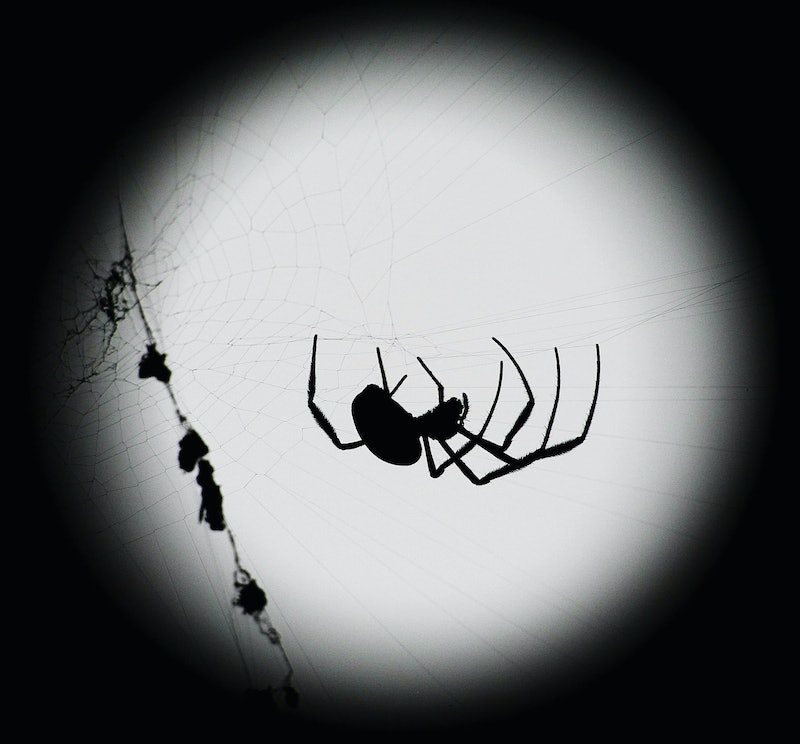 Though they're gross to look at and startling to encounter in the shower, spiders are no threat to us in our waking lives. So why are so many of us dealing with scary spider dreams as soon as we close our eyes? Likewise, most of us have never encountered a wolf outside of a zoo, and may have actively campaigned for their habitats and safety — so why do our dreams so often turn us into our prehistoric ancestors, being pursued across the savannah by a pack of hungry, toothy gray beasts?

Our wildest animal dreams are certainly impacted by TV and films about terrifying animals (your wolf dreams may be as much about a recent late-night viewing of that Liam Neeson movie where he fights wolves in the tundra as they are about a connection to our ancient forebears). But many people believe that they're about something deeper than the last weird film you caught on cable: Some researchers theorize that our DNA has conditioned us to fear wild animals that were a danger to early human beings; and so, when we dream of predators or other threats that once pursued our ancestors across the prehistoric plains, our sleeping selves are connecting to primal instincts that we may be blocking out in our waking hours.

So, with the help of "definitive" dream interpretation site Dream Moods, let's explore what happens when the the big bad wolf (or bat, or spider) comes a-knockin' on the door of your dreaming self.

Spiders in dreams can indicate emotional distance — either you're feeling like an outsider, you're purposely keeping a certain temptation at arm's length, or you're protecting yourself from your own urges towards self-destruction. A spider can also symbolize creativity — if you see a spider spinning a web in a dream, it may mean that you've completed a difficult task, and are expecting to be rewarded. But a spider slowly lowering itself towards you from the ceiling symbolizes a relationship that you now feel you are trapped in.

Insects sighted in your dreams can mean that something is worrying you, weighing on your mind, or possibly annoying you. Alternately, those organized little buggers might mean that you're trying to mentally organize or sort through your thoughts, like a team of ants building a new colony.

One of humanity's most loaded and potent symbols, having one of these legless wonders sidle up to you in your dreams can mean all sorts of things — both positive and negative, with the final meaning determined by your own feelings towards your dream snake.

Happy to see it slither up? That could mean that you're getting in touch with your own creativity, healing some aspect of your inner self, or embarking on some personal transformation (particularly if the snake is shedding its skin). But if the snake is hissing at you menacingly from the corner (or, say, wrapped around your neck), it can stand in for everything from fear of the unknown, to the threat of sexual temptation in your relationship, to the threat of betrayal by a friend or someone else that you trust.

Though a dream of being chased by wolves suggests that you're running from a problem present during your waking hours, a dream where you just see a wolf chillin' can carry both positive or negative significance. A wolf that scares you in a dream can mean that you're troubled by a situation beyond your control, potentially something to do with addiction or hostility. But a dream where you admire a wolf can symbolize your own inner reserves of the wolf-like qualities of resourcefulness, self-confidence, pride, and capacity for solitude.

And a dream where you dream of that three wolf moon t-shirt probably means that you need to get some hobbies besides being ironic on the Internet.

A dream with sharks in it may point to more than a traumatic childhood viewing of Jaws — spying a shark on the shores of your dreams can mean either that you are in the middle of a difficult emotional transition, and may be feeling "anger, hostility, and fierceness;" or that you are struggling with issues of greed and unscrupulousness, either within yourself, or in the form of another person causing stress in your life.

Yes, alligators and crocodiles are not the same animal. But try telling that to your subconscious, okay? Your dreaming mind is way too busy running away from these rampaging reptiles — being chased by either creature usually signifies a refusal to face a painful or troubling situation head on. Simply encountering an alligator or crocodile in a dream can mean that there is hidden danger in your life that your conscious self is trying to avoid — or hidden strength within you that you have yet to really tap.

Dreaming of literal bats in your belfry can mean that you're feeling unhinged or annoyed. They can also symbolize blindly entering into a new association, job, or relationship, or even being blind to your own potential — you have the ability to do something you dream of, but you're not on the right path, and need to accept and make room for your own personal growth.

Getting some harsh puppy love from a Cujo in your dreams may mean that you've felt under attack lately by people whom you thought were your friends. Similarly, slaying a rabid dog signifies overcoming those same emotional attacks from people whom you trusted.

Lions stand for courage, strength, and power in our dreams. Just like in The Lion King!

Spotting one majestically strutting across the grass can symbolize your need to be in control of others, or your capacity to emotionally triumph over the problems you are currently dealing with. However, if Scar tries to eat your face (or any ol' lion attacks you), it may mean that you're feeling compelled to engage in some self-destructive behavior.

Hyenas symbolize greed, or being overwhelmed and beaten down by your responsibilities. Just like in The Lion King?

Once again, the meaning of the panther in your particular dream depends on how you feel about the panther in question. Digging its beauty? Then it symbolizes your inner power and grace, or your own spiritual or emotional rebirth. So terrified of it that you dream-poop in your dream-pants? In that case, the panther may represent hidden danger in your waking life, and folks who wish you misfortune.

Tigers spotted on the astral plane represent power — and seeing one might be a sign that you need to exert more of your own. But if a tiger attacks you, you may have some repressed emotions you've been to afraid to deal with. If you spot a tiger in a cage, those same repressed emotions may be rising to the surface, and will come out soon. Grrrrr.

When the rats come out to feast on the garbage of your dream life, it might be time to look at your own behavior: these furry foragers can signify inner turmoil relating to greed, guilt, self-doubt, and shame over your own actions, or even repulsion about something in your life. Catching a rat with your bare hands in a dream signifies the undeniably positive fact that you're triumphing over these feelings; but even though it's positive, I still can't guarantee that you won't wake up screaming from that one.