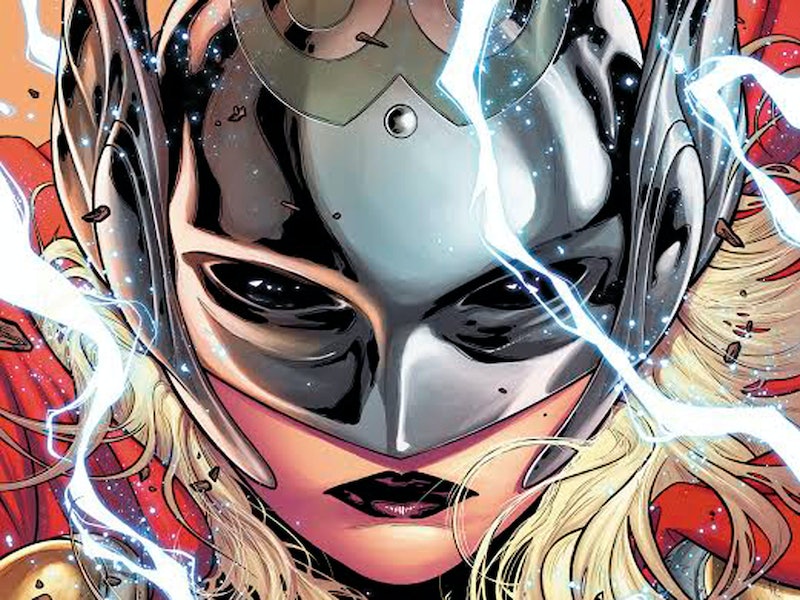 Ever since Marvel announced last year that in the new run of comics, Avengers member Thor would be female, the Internet has been in a fury of debate. Some of it has been just plain misogyny (no surprise here), others thinly veiled misogyny behind an argument of keeping Marvel's traditions, some has been claiming it's a gimmick or a marketing ploy (though because Marvel is a commercial company, I'm not sure exactly why this is worse than a million blockbuster movies), and others who just think the writing isn't up to par to support the idea of a female Thor. Of course others are just plain thrilled with a female Thor, rocking the hammer and helmet like a true badass. Not Lady Thor, not She-Thor, but Thor, the real deal.

And as for Marvel? It's listening to all you haters out there. Writer Jason Aaron and illustrator Russell Dauterman can hear everything you have to say about the Goddess of Thunder — especially you, Fox & Friends' Tucker Carlson, who seriously, seriously used the word "chick" in 2015 to describe a woman. And they're imbuing your anti-feminist arguments into the next edition of the comic, Thor #5. The creators of the comic had its villain, Absorbing Man, say "feminists are ruining everything," and then the female Thor promptly break his jaw.

That's a statement if I ever heard one.

And as for those who think the female Thor is against Marvel's own traditions and Thor's backstory, Aaron also has something to say about that, which he commented on with The Verge.

"It goes back really to Thor’s first appearance," Aaron told me. "To have somebody else come in and pick up that hammer and be changed by it, to me, is an evolution of that idea started by Stan Lee and Jack Kirby back in 1962."

Aaron said that it seemed to be a natural progression for a woman to pick up Thor's hammer and become Thor herself, dating back to the character's original story created by Lee and Kirby and following in the Original Sin story arc. So it's not really bucking tradition at all. In fact, dismissing the idea of a woman being able to become Thor seems like an oversight of the original story, something that wouldn't quite be explained why it could be only men.

For now, comic readers don't know just who that woman is, though everyone is dying to know. The big bets are on S.H.I.E.L.D. agent Roz Solomon who plays a big role in Aaron and Dauterman's comics, and who has a sort of Clark Kent-Superman thing where Thor and Solomon never seem to be in the same room at the same time.

But no matter who the female Thor is, it seems that Aaron and Dauterman are making sure she's here to stay. Which is good because women in comics are here to stay too. And the creators will take a hammer to anyone who dares cross her.

More like this
10 Must-Read New Books Out This Week
By K.W. Colyard
Self Esteem's “F*cking Wizardry” Is An Anthem About Knowing Your Worth
By El Hunt
Women Around The World Are Cutting Their Hair In Solidarity With Mahsa Amini
By Darshita Goyal
This Episode 6 Moment Foreshadows Viserys' Fate On 'House Of The Dragon'
By Grace Wehniainen
Get Even More From Bustle — Sign Up For The Newsletter