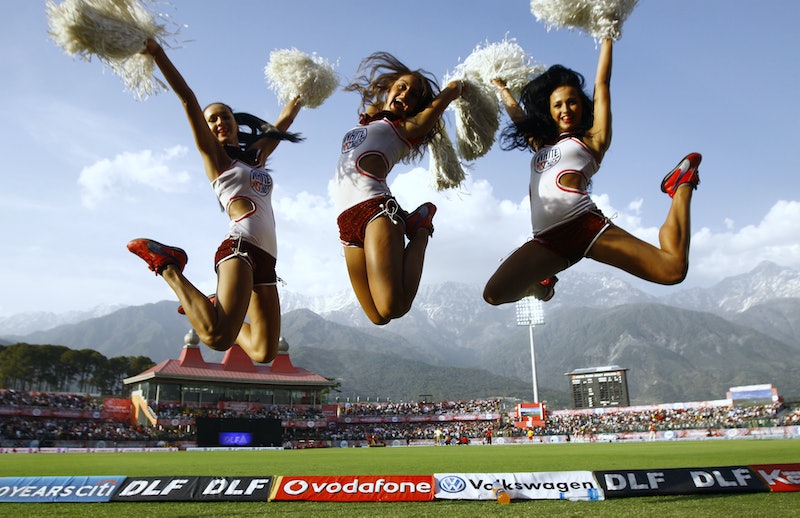 The six most offensive words in the English language (aside from, "Oh, that was your leftover pizza?") are often said in reference to cheerleading: "That's not even a real sport." First, people who say this just tend to be insecure jackasses who somehow need to feel mightier by tearing down somebody else's passion. Second, they've obviously never seen this video of cheerleaders performing amazing tricks. Seriously, when you take a look at this you'll see that cheerleading isn't just a sport, but is arguably the hardest sport of them all.

I am not a cheerleader nor will I ever be, by design of my complete inflexibility, lack of hand/eye coordination, and the fact that I will never be able to summon the INSANE discipline that these humans have. Most of them regularly get up before dawn to practice, and basically defy death every day with gravity-defying flips, throws, and tumbles. If you lose your focus for a second on the soccer field, your teammate gets mad; if you lose your focus for a second as a cheerleader, your teammate gets a broken bone, or worse. More than 70% of catastrophic injuries caused to college women in sports were a direct result of cheerleading. Talk about pressure.

Oh, and they have to do all these crazy stunts with big smiles on their faces after traveling for god-knows-how-long during exhausting competition seasons, in full make-up, with their hair tightly done up in ways that give me a headache just to behold. It's like a sport and a pageant and a high stakes circus performance without a net all rolled into one. That's a lot of intense stuff to roll into one anything. I'm not even sure when these magical creatures sleep. On second thought, if you have any doubt about whether or not cheerleading is a sport, maybe you're right. Because a "sport" is nowhere near as badass as what cheerleaders do on the reg:

1. This veritable circus of cheerleaders showing off their tricks

2. This routine that will make you lose your breath just watching it

3. This 8-year-old who can back flip into oblivion

4. This series of extreme cheerleading stunts so insane that your inner worry-wart will maybe cry a little bit

5. This 5-year-old who makes back flips look totally casual

6. These cheerleaders who took it to another level with jump rope stunts

7. This teamwork so brilliant you won't even know where your eyes should look

8. These girls who are totally fearless during the craziest tryout ever

9. This team whose synchronization will mesmerize you

10. This cheerleader who grabbed a basketball mid-flip and made a long shot

11. This guy who uses a wall as a tumbling partner

12. This sassy 2-year-old girl fully killing it with her dad

13. This high school cheerleader who set a world record for consecutive back flips

14. These high schoolers who deserve their own television show

15. This video shot entirely from an LSU cheerleader's perspective

16. This quite possibly insane toss you will replay six times

17. This compilation of stunts from teams all over the nation