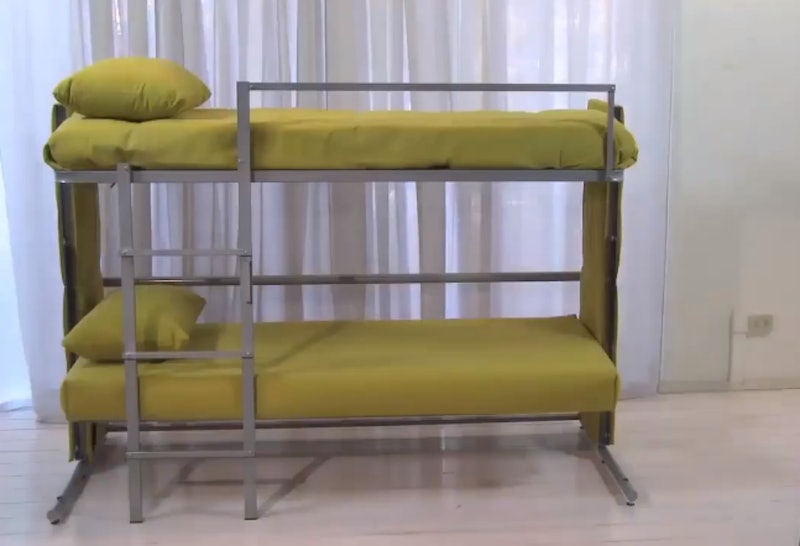 Remember how inexplicably alluring those bunk beds that had a futon couch as the bottom bunk were back when we were kids? For whatever reason, our middle school-aged selves wanted nothing more than to sit on an almost-couch with out friends, watching VHS tapes and discussing upcoming dances. It seemed like the pinnacle of cool, as far as bedroom furniture went. Fortunately, most of us get older and our taste in bedroom decor evolves, at least a little. But be honest: A part of you will always have a soft spot for the immature furniture preferences of our youth. I feel pretty much in love all over again thanks to this admittedly confusing but totally amazing couch/futon/hybrid...thing. Okay, I have no idea how to name thing piece of furniture, but I do know I want it. Dear god, I want it so badly.

As much as you would think that it naturally takes a lot of effort to convert this contraption between its various forms, it doesn't actually look like it's that hard. The demonstrative model unfolding and refolding the sofa bed thing is wearing rather spiky heels. Spiky heels! I generally don't even try to attempt walking faster than a mild stroll when wearing any type of heel, so opening and closing this couch/bunk bed thing can't be that hard. Maybe this gadget really is some sort of wizardry. Mostly, I can't stop mentally arranging it all around my living room.

Some basic research reveals this furniture doesn't exist only in video form, but also in real life that you can purchase it here. Dreams: They come true.