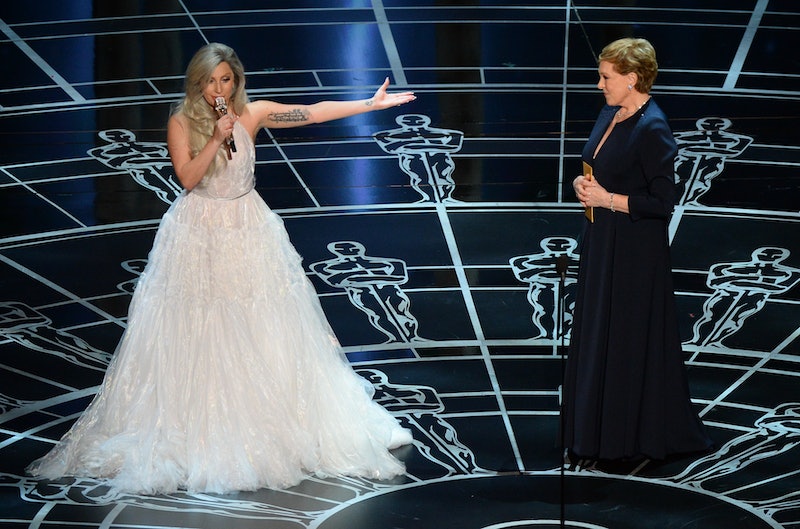 The Academy Awards are the biggest and most prestigious ceremony of the award show season, and with good reason: Most of it is amazing — the gowns, the jewels, the sharp tuxedos, the tongue-wagging about dates, the acting, the stunning sets — but there are a few notes that always fall flat: An actor always makes an awkward statement of some sort, someone forgets to thank their spouse, a musician wears a bird to the ceremony, a speech goes 15 minutes too long, James Franco co-hosts, or an award recipient trips and falls in what was probably not a planned pratfall (maybe, I’m still not sure) when going up to get her statue.

With song-and-dance-man-slash-actor Neil Patrick Harris at the helm of this big, gold-plated ship, this year’s Oscars had all of the best and worst that the Oscars can provide. Did you miss a moment or two? Or just want to relive it all? Let’s review the evening’s ceremony by using my favorite medium: the gif.

After a five-hour long red carpet, celebs like Oprah rushed to get in their seats before the show started (or maybe she was just trying to get away from Lady Gaga).

Upon accepting the Oscar for Best Supporting Actress, Patricia Arquette started a rousing speech about fighting for women's equality.

And Jennifer Lopez and Meryl Streep were really pumped about it: Now they're best friends.

John Legend and Common won for Best Original Song, further cementing the importance of Selma and its civil rights message.

John Travolta got a little too close to Idina Menzel...

While Wes Anderson learned how to clap (or was doing his best Birdman imitation).

David Oyelowo read our minds when expressing his feelings about the nights ceremony.

Oprah went through a full spectrum of human emotion, raging from overjoyed...

The Oscar writers went for the obvious jokes with Anna Kendrick and Kevin Hart...

And everyone was super-jealous of Benedict Cumberbatch's forethought to bring booze into the ceremony.

...and Lady Gaga hung out with Julie Andrews on stage.

All in all, "Everything Was Awesome", as demonstrated by Will Arnett (dressed as Batman) and Questlove.

That's a wrap, everyone! See you all next year!