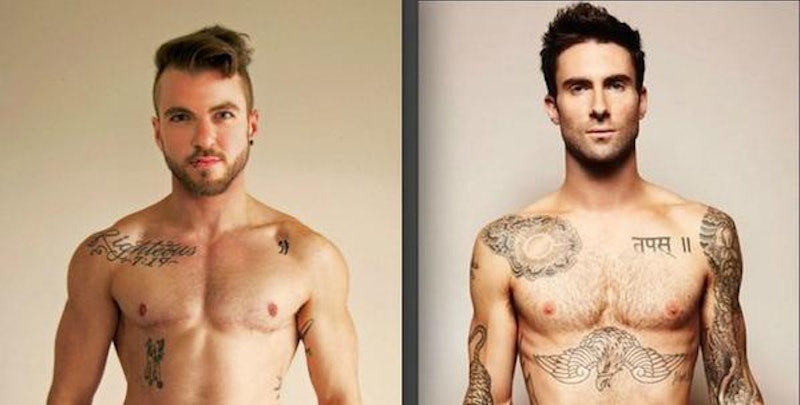 Maroon 5 frontman Adam Levine made waves when he posed almost naked for a good cause a few years ago — and now that image has provided the inspiration for what might just be one of the most important photo shoots in recent memory: Trans entrepreneur and advocate Aydian Dowling recreated Adam Levine's iconic pose for FTM Magazine's Spring 2015 issue. Like Levine's photograph, which appeared in Cosmopolitan UK in 2011 to raise awareness for prostate and testicular cancer, Dowling's photo also aims to raise awareness; this time, though, it's for the trans community. Not only does it make an extremely powerful statement, it's also sexy as hell. Seriously, you guys — it's hot.

FTM Magazine, a print and digital publication which bills itself as “the all-in-one source for female to male culture,” was successfully Kickstarted in 2013 by Jason Robert Ballard, who also created the trans resource and advocacy group The Self Made Men. Said Ballard to The Advocate in 2013, “I was reading GQ waiting for a hair appointment and thought, 'This would be a great time in the trans movement to launch something like this for trans men.'” The goal is to function as “a source of pride to combat the negative stigma of the media and Jerry Springer-like productions; something to sit on [readers'] coffee tables or in their healthcare offices and show them they're not alone.” Furthermore, adds the magazine's mission statement, “FTM Magazine is… dedicated to the lives and culture of the FTM and trans-masculine community. Our content is appropriate for all ages and touches on the needs of those at all phases of their transition.”

Dowling, meanwhile, began documenting his transition on YouTube in 2009:

As he transitioned, he also spoke to his viewers about his thoughts, fears, and successes, becoming a powerful support mechanism for others going through the process of transitioning. He and his wife, Jenilee, created Point 5cc Clothing in 2011 to raise funds for his top surgery; after the funding was completed in 2012, though, they decided to keep the stealth clothing company as a way to give back. Point 5cc has since developed the first binder exchange program in the United States, helping to supply free binders to those who need it; additionally, it hosts an annual Transgender Surgery Fund, which uses the profits from Point 5cc and donations to provide funding to others pursuing gender-confirming surgeries.

From all that, you can probably see why Dowling's FTM cover and his Levine-esque image are so important. According to the magazine itself, the fact that it releases quarterly means that the cover models are usually booked almost two years in advance. Dowling's issue was scheduled to correspond with his upcoming appearance at the Trans-Health Conference in Phildelphia. Dowling and Ballard exchanged photos they had found for inspiration — and when Ballard rediscovered the Adam Levine one, he suspected it might be just what they were looking for The goal wasn't just to “do something risky,” though; like Levine's image, Dowling's also hopes to raise awareness among both trans and cis communities.

Ready for the full image plus bonus Adam Levine comparison? Here you go:

Wrote Ballard in an email to the Huffington Post, “[W]e've received almost unanimous support for [the photo since it debuted] and our attempts at creating visibility for the trans masculine spectrum. We by no means mean to say that this is what all transgender males look like, but this is what one of us looks like and it's no different from our cisgender counterparts.” It seems like it should be obvious, but Ballard is absolutely right: All bodies are different, and all bodies are awesome — whether they're cis, trans, male, female, fat, skinny, whatever. Furthermore, Ballard speculated, ““Perhaps we're struggling so hard for our rights here because people have a false sense of who we are. So besides the entertainment factor of a sexy naked man, there is an element of positive visibility, too.”

I think, though, that when it comes to nailing down the importance of the image, Dowling himself said it best: As he put it to BuzzFeed, “Some areas of my body used to remind me of everything I'm not. Now they represent everything I am.” Those two sentences? Yes. That. So much that.

Head on over to FTM to see more images from the upcoming issue, and subscribe if you'd like to get your hands on it yourself.