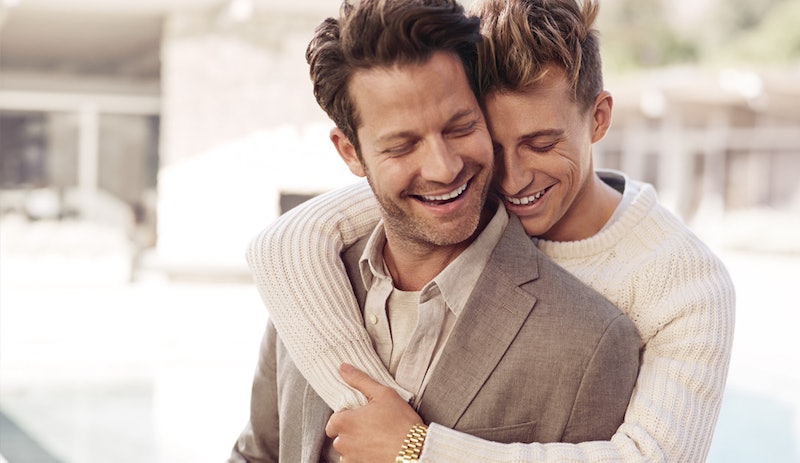 In case you've been under an societal rock, we've come a long way since Mad Men. Finally, companies are getting with the program and realizing that not every family out there is made up of a mom, a dad, and two perfect kids. Corporations have begun to step into the present day and are finally printing advertisements and commercials featuring same-sex couples and LGBTQ+ people.

The most recent company to get with the times is Banana Republic. Featuring interior designer Nate Berkus and his fiancé Jeremiah Brent, the print ads for Banana Republic’s upcoming fall collection show the couple all cute and cuddly — while rocking BR’s duds, of course.

"Gay millennials tend to have the view that most companies are at minimum neutral toward and at best strongly embrace their identities," Matthew Wagner, Account Supervisor at Target 10, tells Bustle. Wagner should know: Target 10 is a New York City marketing firm that works with brands specifically so that they can reach gay consumers.

"The bar for LGBT marketing has been raised higher than ever ... campaigns need to be truly impactful through a combination of insights, messaging, tonality, and knowledge."

Here are 11 other companies that haven't shied away from including all types of love and families in their ads.

Ikea was actually the very first company to put a gay couple in a national TV ad, way back in 1994. Although the company received a lot of hate for it — an Ikea in Hicksville, NY (yup) was actually evacuated following a bomb threat — Ikea stood behind the ad. For Ikea, this was just the beginning of a long line of ads to feature same-sex couples.

In 2012, JCPenney's Father's Day ad featured real-life dads Todd Koch and Cooper Smith with their real-real life kids, Claire and Mason. The ad was in direct response to American Family Association's One Million Moms' attempt to boycott the store after it hired Ellen DeGeneres as a spokesperson earlier that year. You go, JC. (Even if many gay men wouldn't be caught dead in your store.)

With one of the best slogans ever for wedding registries, Target's "Be yourself, together" campaign definitely pulled at the heartstrings. Whether is was a PR attempt to "fix" things after it was discovered the company donated money to anti-gay politicians in 2011 or simply a change of heart, the ad was truly a beautiful ode to same-sex marriage.

In 2009, online dating site Chemistry.com realized that [SPOILER] it's not just straight people who are looking for love.

This year's Winter Olympics in Sochi were steeped in controversy, in large part due to Russia's anti-gay laws. Coca Cola, one of the biggest sponsors of the games, decided not to remain silent. To show both the LGBT community and Cheerios (who faced their own controversy over an interracial couple ad) solidarity, Coca Cola responded to Cheerios on Twitter with a photo of a same-sex couple using the hashtags "FamilyLove" and "AmericaIsBeautiful."

It's not a full-blown gay polar bear commercial, but hey, it's a start.

Not only did Microsoft get their LGBT love on with a commercial featuring the marriage of two women, but they also used Macklemore's "Can't Hold Us" in the background. (Macklemore, of course, being the guy behind the same-sex love anthem of the year, "Same Love.")

Before sister store Banana Republic got on board, Gap had already been there, done that by 2012. Never before has a grey t-shirt looked so cozy.

As part of its 2012 "Never Hide" campaign, Ray-Ban released an ad with two dapper men, hand-in-hand, in a 1940s setting. The campaign also coincided with the brand's 75th anniversary; a nice homage to how far we've come as a society.

K-Y Brands decided it was time to address the fact that same-sex couples are — GASP! — having sex. (And some of their best customers.)

This commercial for Amazon Kindle takes an awesomely different direction than you'd expect.

Too often, the the 'T' in LGBT gets sidelined. But department store Barneys made headlines this year with an announcement that it will be casting only transgender models in its Spring 2014 campaign.

The campaign will feature 17 transgender men and women alongside family and friends. It is the result of a partnership between Barneys, the National Center for Transgender Equality (NCTE), and the LGBT Community Center (The Center).

Here's hoping that soon, LGBT marketing will be known as just plain-old marketing.