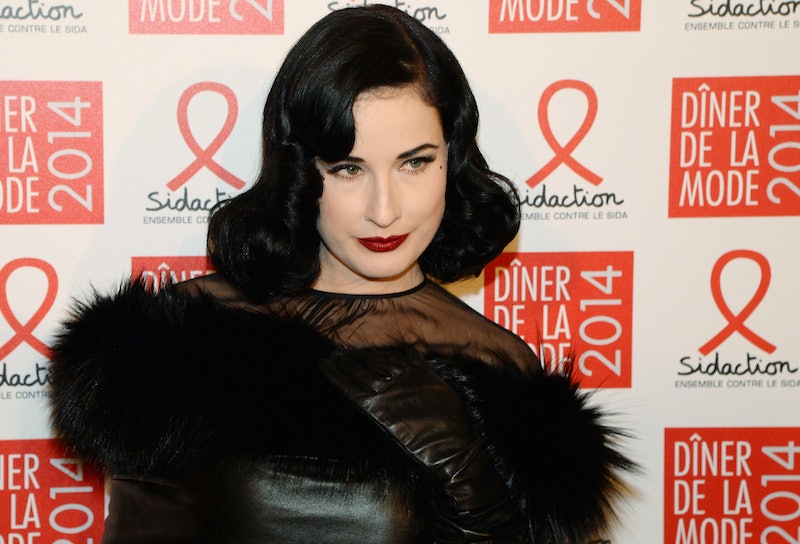 She's the most well-known burlesque performer around today, so it's no surprise that Dita Von Teese has some clear opinions on the role the shows play for a modern audience. Speaking ahead of a performance — involving a giant gold birdcage! — at the W Downtown on Thursday, Dita Von Teese opened up about burlesque in today's day and age, saying, "It's become this kind of movement of a new brand of feminism where woman are comfortable with their sexuality and they realize that indulging in playful, fun, glamorous, sensuality can feel good."

Von Teese has spoken about how she views the current version of burlesque in the past. In an interview with The Huffington Post back in October, she explained that burlesque "turns the old fashioned ideas of feminism upside down." Expanding on this, she says,

Burlesque, when it was first flourishing in the United States, it was generally geared towards men. It was that era’s strip club. And now, it's a decidedly female audience. 80 percent of my audience is female — or more. You’d be hard pressed to find a group of straight guys there. You just wouldn’t.

So does Von Teese call herself a feminist? "It's difficult to say, because everyone has a different view of what feminism is," she says. That said, she leaves no doubt that she's all for women feeling empowered. "From my point of view, it's really about being able to do what you want, and being able to make whatever choice you want, so that's how I see it. I don’t think we should be dictating to anyone what the feminist movement is."

And as for the props that go along with burlesque, the birdcage Von Teese went on to perform with doesn't top the list of her favorite props — her fave is still her classic martini glasses! "I still love performing in my martini glasses. It's effortless. It's fun. It's what I’m known for. I enjoy it." And after seeing her perform, and how she relates to the crowd, it's clear enjoying it is a pretty important thing!