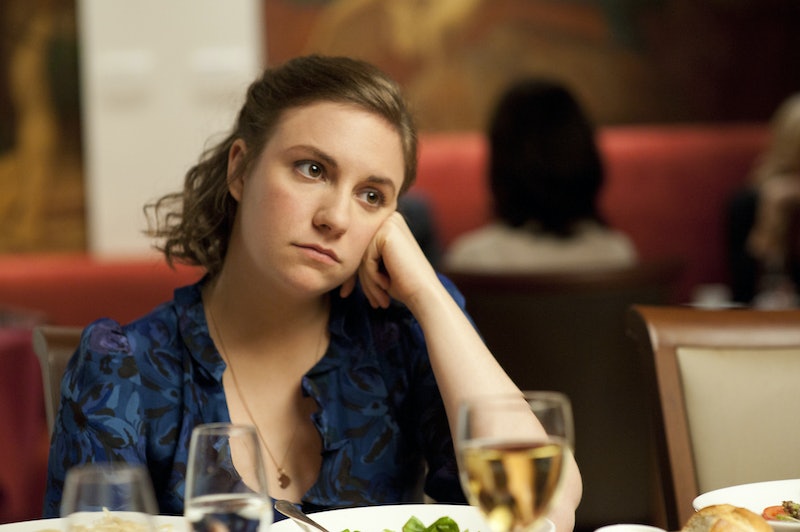 Once upon a time, it was merely a Saturday Night Live sketch, but now it's becoming a full-blown reality. It's just been confirmed that Lena Dunham is going to be a guest star on an upcoming March episode of Scandal . Will it be as her SNL character, flighty new Gladiator Kelsey, who felt rightfully confused by the rapid-fire pace of the team? No, I'm hoping they take this from a new angle — and incorporate Girls' half-relatable, half-insufferable protagonist Hannah Horvath.

Interesting enough, Dunham has hired Judy Smith, the crisis management expert and inspiration for Olivia Pope, to offer her council. So I could imagine that Hannah would totally want to get Olivia and company to help her out with her Adam troubles, her shattered reputation at Iowa, and her hunt for good real estate (millennials, amirite?) In fact, I can literally hear some amazingly entitled Horvathian platitudes being spouted already.

And why keep it to myself? Here's, word-for-word, how I would imagine Hannah would be like on an episode of Scandal. NATURALLY prepare for big spoiler alerts for both.

When she shows up in Washington D.C., ready to take control of her life:

"Honestly, I needed such a break from the whole Mimi-Rose shocker, D.C. is going to creatively invigorate me and turn this whole experience into a small albeit heart-wrenching and poignant footnote in the story of me."

When she shows up to Olivia Pope & Associates, because she's incapable of taking control of her life:

"I think I need assistance managing a crisis, and the crisis is... my entire life from age 13 to now."

When she's told that hunting down scandals in Mimi-Rose's background isn't the kind of work that they do:

"Well I'm not talking, like intro-level Harriet the Spy kind of investigating, I mean sophisticated research that my macbook isn't really capable of. It's a 2007 model, the keys still stick in weird places from the one time I spilled Jessa's stupid kombucha tea on it."

When she's told they're more about containing scandals before they get out of proportion:

"Actually maybe you could help me there, I recently left the University of Iowa after maybe insulting the majority of my classmates, and I don't want that kind of negative reputation. Although I DO see myself as a truth-speaker, and speaking my truth may have been what's holding any dignified reputation together. Actually, you know what, scrap that idea."

When Shoshanna is in the background live-tweeting this:

"OMFG this is getting so intense right now. Olivia's pant suit is def giving me pant suit-spiration. #Scandal"

When Hannah thinks maybe she could at least get some good real estate tips out of the deal:

"I mean, my place in Iowa was beautiful, but my apartment in New York was SO expensive and so small, it was like I was trapped in this hole, like literally it was the worse."

When Olivia relates that she felt trapped when she was kidnapped and nearly sold to Russians: