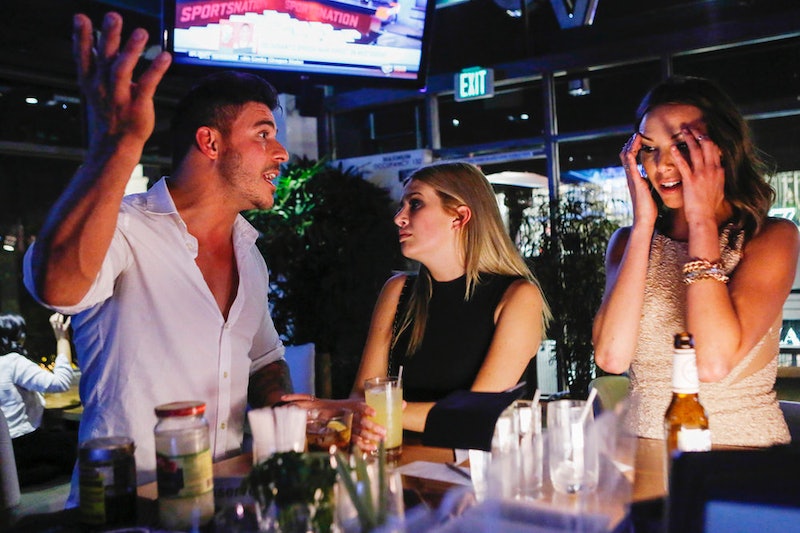 These two have had a bumpy relationship. Sorry, "bumpy" is a huge understatement. Maybe replace bumpy with "they need a partition between their faces like in jail visits." In the first two seasons, the women didn't exactly get along; in the third, they haven't even been in the same room once. And honestly, it's been better for all that way. So what does it mean that they're joining forces to expose Jax's lies and get to the bottom of all the secrets that Season 3 has consisted of? I can't imagine it is going to end well, since Jax amazing at avoiding the truth, but maybe since Stassi has no friends anymore — except for Kristina, the occasional confidant — and Kristen isn't exactly in a position to turn away friend requests, maybe Stassi and Kristen will end up exchanging friendship bracelets.

If you're still holding out hope, here's proof this just won't ever work:

Season 1: They Didn't Get Along

In Season 1, there was an on-going issue between Stassi and Kristen. They didn't get along, at all, but honestly, Stassi was kind of hard to get along with in Season 1. Kristen wasn't as monumental of a player in this season, but she and Katie were like the same person and were both anti-Stassi. In the season finale, Stassi and Kristen buried the diamond-encrusted hatchet, just in time to warm up for Season 2.

Season 2: They Hated Each Other

I don't even know if a walk down memory lane can explain Stassi and Kristen's relationship any better than the GIF above, but the story is just so good I have to tell it: After rumors started circulating that Jax and Kristen slept together, Stassi learned that Kristen and Jax did go to pound-town and it was really a lose-lose for every single person involved. Kristen was now on the wrong side of Stassi, and I don't know how to put this lightly, but that is the last place you want to be in life. If you find yourself there, it's not going to end well.

Season 3: They Were Dead To Each Other

These two have not had any issues with each other in Season 3, mostly because they basically pretend like the other doesn't exist. Sure, Stassi has gotten in a few jabs at Kristen's life choices, but up until this "meeting" that's going down on Monday's episode, the two have had their own issues to deal with. For Kristen, that's working really hard to make it look like she isn't obsessed with her ex, Tom. And for Stassi, that's to disown friends like Katie. Stassi is very good at disowning.