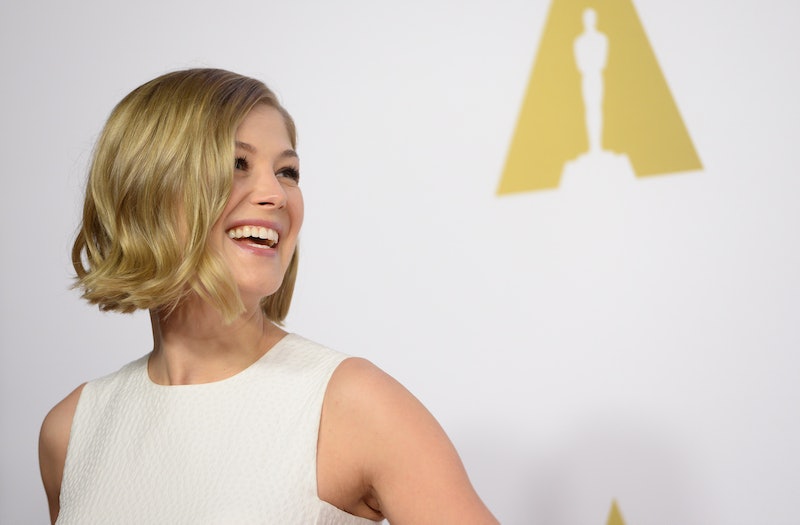 Rosamund Pike is surely in for a big night on Sunday. She's up for an Oscar for Best Actress for her breakout role in Gone Girl, and if her past red carpet appearances have been any indication, she'll probably have picked out a special dress for the occasion. Hopefully her dress will be white, as that color suits her well. And speaking of white dresses, some may be wondering if Pike is bringing her partner to the Oscars and if Pike is married to said man. As it turns out, Rosamund Pike and Robie Uniacke are not married, but they've been together since 2009.

Pike's reasoning behind why they haven't tied the knot is really interesting. Back in 2012, she told Vogue,

You try to do the right thing and the conventional thing, and it doesn't work, and then you're free again. It is interesting to break all the rules. I'm not married, I have a baby, and it feels infinitely more right.

For some context here, Pike used to be engaged to director Joe Right, who she met back in 2005. Obviously, their relationship did not work out, hence why she probably felt "free" once it was over. And now, seeing as she's been in a committed relationship for nearly six years, she probably feels comfortable with the decisions she's making with Uniacke. After all, they seem to be positive influences on one another, so it makes sense that they would want what is best for both of them as they move forward with big life decisions together —such as welcoming two beautiful children into the world, for one.

After all, Pike has opened up a few times about her non-famous partner to the press, calling him "interesting," "fearless," and "clever," among other things. Aside from these compliments, she has also said that Uniacke has been a big help to her in developing her acting skills. It's pretty clear that he is supportive of her career, despite her being more well known than he is, and supporting your significant other's dreams is always a positive thing in a relationship. And considering that Pike has hinted that marriage might not be in the cards for her, it is good for her to have a partner who respects and values that decision.

Considering her beau has had two marriages end with divorce before they got together, it is safe to say that he is keen to be understanding of her reasons for probably not wanting to get married, as well.

It's safe to say that Uniacke will be Pike's biggest cheerleader when she finds out whether or not she wins that coveted trophy. And she will probably still be a winner no matter what in his eyes.