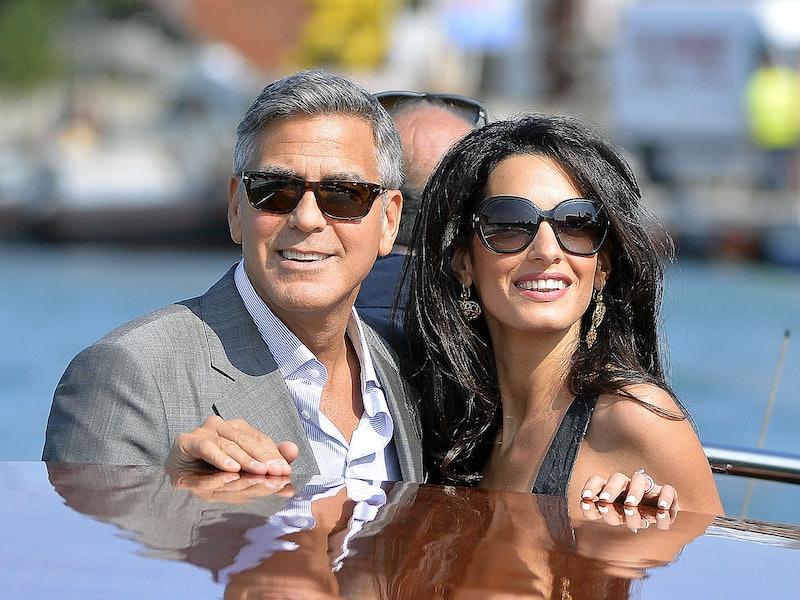 Add this piece of news to your list of randomness, because this is one double date I never thought would happen. Maybe I'm just out of the loop, but I had no idea George and Amal Clooney are friends with Sacha Baron Cohen and Isla Fisher. Guess what? It's true. They are. According to Page Six, the two couples hung out together on Wednesday night, which makes for one interesting evening, if I do say so myself. Also, it's reported that Michael Keaton even showed up and paid their table a visit, where he chatted with his fellow Batman counterpart.

Now that I have this picture in my head of these two couples chilling over what I presume to be lots of delicious foods and yummy beverages, I can't help but wonder what they talked about. Did they share a lot of laughs? Did Sacha crack jokes? Did George talk up his Cecil B. DeMille award? Did they talk about Amal's astounding humanitarian work? Whatever the case, I want to know and I need to know now.

Well, we'll probably never know what the foursome talked about during their fun double date. However, that doesn't mean we can't speculate, because that always makes for a good time, right?

So, here are seven things they might have chatted about in between all those stares I'm sure they were getting out and about.

How Amazing Amal & Isla Are

I think we can all agree that Amal and Isla are talented and inspiring women. There's no doubt that Sacha and George gushed about their wives, all while Isla and Amal nodded in agreement, because, duh, they know how fabulous they are.

Sacha and Isla are parents to two children, with another one on the way, so I'm sure the topic of kids was brought up, like if George and Amal want to start a family of their own. I think we can all agree that George and Amal's kids would be a beautiful, intelligent, and talented specimen.

Like Amal and Isla, I'm sure they also gave their husbands credit for being talented. After all, George won two Oscars, and Sacha was nominated for one. Yeah, you could say they're creative.

If George Would Ever Wear This For Amal

What do you think? Maybe in the privacy of their home...

The Potential Of An Isla/Amal Movie

Can you imagine these two as the leads of a movie? The women could write, produce, and direct it, too. Yep, I think we have the next hit on our hands.

When They're All Vacationing Together

Those who double date together, also vacation together. George and Amal are always traveling the world, so it makes sense that Sacha and Isla would want to join.

How They Can All Change The World

Let's face it, these four could probably change the world. If you combine their creative genes, smarts, passions, philanthropic efforts, among many others, you have the next powerful foursome.