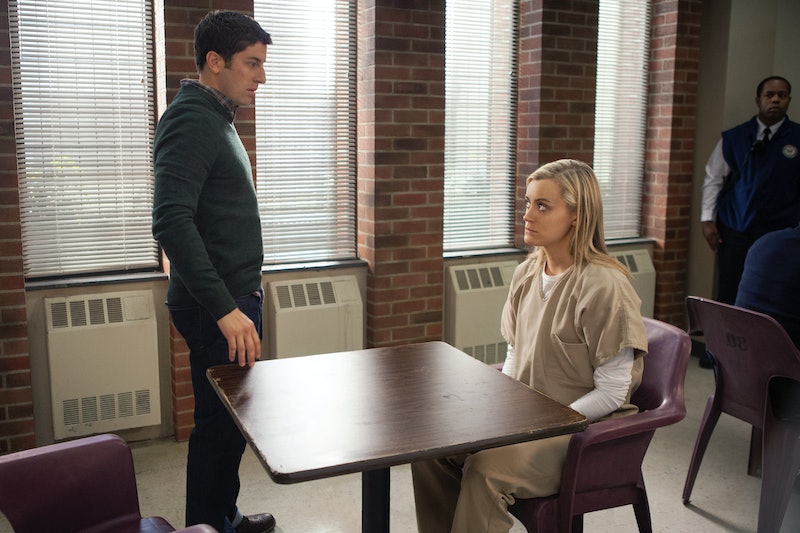 If you think the wait for Orange is The New Black's third season is painfully long, you're not alone, but the news I'm about to tell you is going to make that wait even more worth it. According to what Jason Biggs tells The New York Daily News, it's official: Jason Biggs isn't coming back for Season 3 of Orange Is The New Black — which, yes, means Larry isn't coming back for season 3. It's basically the next news ever for the majority of the people who watch the show, because Larry is obviously the weakest link and it's a wonderful thing to know that we won't have to deal with his story lines in the next season. Did you just start listening to Kool & The Gang's "Celebration," or was that just me?

"They're not focusing on Larry at the moment," Biggs said. "Larry will not be in season three. But there's always a possibility he can come back."

Let's ignore that last part, because honestly, all that matter is that there will be no Larry for at least the next season, and if that's not a reason to get excited, I don't know what is. In fact, if you're confused by the rush of emotions you're feeling right now, let me explain them to you.

Wait, Larry won't be in the show anymore? This can't be serious. Are you sure Jason Biggs actually said that? I don't believe you.

2. And Then You Realize How Awesome This Is

OMG. This is real. This is a thing that's happening. Good riddance, Larry. SEE YA NEVER.

3. Mostly Because It Means More Scenes With the Main Cast

No more dealing with whiny, tortured Larry, and way more of the Taystee twist. And maybe even more of Taystee and Poussey conversing in their white suburban accents? Yes please.

4. And That We Won't Have to Suffer Through the Polly & Larry Relationship

Was it just me, or was seeing Polly and Larry "fall in love" actually the most painful experience ever? The only good thing that came out of it was Piper's flawless reaction to it, because duh. Real best friends don't hook up with their BFF's fiancé while said BFF is in prison. You just don't. Hey, wherever Larry's going, can he take Polly with him?

Sorry about that paycheck, Jason Biggs, but I'm too excited that your character won't be returning to care.

6. And Then, The Agony Returns

Because the absolute earliest we will get to see any of these awesome, Larry-less episodes is June, and that is still at least three months away. Oh, June. The most perfect month of them all. A time of binge watching and sunshine and no snow on the ground. It will be beautiful.