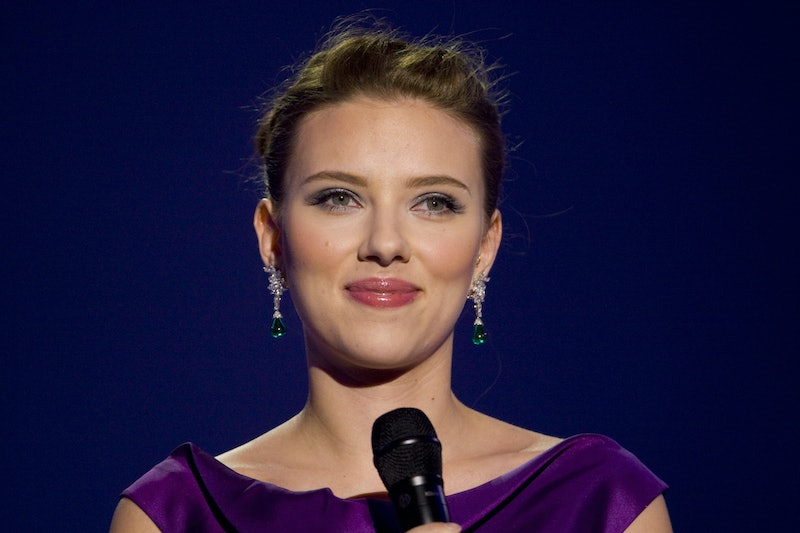 It's no secret that Scarlett Johansson can sing. The actress has showed off her musical talents several times in the past, whether in the form of a Tom Waits cover album, roles in music videos (remember "What Goes Around... Comes Around?"), or soundtrack songs for movies like He's Just Not That Into You and Chasing Ice. Yet in the past, the star's acting career has garnered far more attention, and for good reason: despite having a lovely voice, none of her musical projects have been particularly memorable. Now, though, that all might change, thanks to Johansson's new song "Candy," the debut song from the star's newly formed all-girl supergroup, The Singles.

Along with Johansson, The Singles features the all-star team of Este Haim, Holly Miranda, Kendra Morris, and Julia Haltigan, and the band's sound is as great as you'd expect; "Candy," a peppy, addicting tune, goes down as sweet as the food that inspired its title. Johansson told Rolling Stone that the band, who's inspired by groups like Grimes and the Go-Go's, hope to make "super-pop dance music" — and if their first single is an indication of what's to come, they should have no problem living up to that label.

Yet it might be hard to fully enjoy the song if you're still caught on the fact that Scarlett Johansson, she of Lost in Translation and Black Widow fame, has a girl band. She's not the only celebrity you'd be surprised to learn has a musical side — seven more A-list actors who're also in bands:

Laurie often displayed his musical talents on House and has released two solo blues albums, but fans might not know that he's also a member of Band From TV, a supergroup of television stars also including Teri Hatcher and Greg Grunberg. Unfortunately, they don't perform often, and many of their members have faded from the spotlight; perhaps the group should be renamed "Band From Mid-'00s TV?"

Although Dead Man's Bones has only released one album, back in 2009, it's made quite an impact: without it, we wouldn't know that children's choirs can rock 'n roll, and that Ryan Gosling likes to go by the nickname "Baby Goose."

Smith's musical side is certainly no secret, but with so much focus on her family's careers and her new role on Gotham, it's easy to forget that it exists. But Wicked Wisdom, her nu metal band, is pretty memorable; their most recent song, "Stuck," was all over the headlines when it was released in 2013.

Michael Cera has played in two relatively decent bands, but forget about those. What's important is that in 2014, he released a solo album called "True That," which includes the songs "What Gives (…I can't live like this),"uhohtrouble," and "Sexy Danger." George Michael would be so proud.

Speaking of mid-'00s TV stars, The O.C.'s beloved Adam Brody has been in a band called Big Japan since 2005. Suddenly, that episode where Taylor tries to set Summer up with a guy called Big Korea makes a lot more sense.

The How to Train Your Dragon star plays drums for The Young Rapscallions, a California rock band currently working on a new album.

Described as an "improvisational music project," The Shoe, featuring The Hunger Games' Malone and musician Lem Jay Ignacio, released their first album last year. Currently, they're performing around the country — at least whenever Malone can get away from her Mockingkay promotion duties.