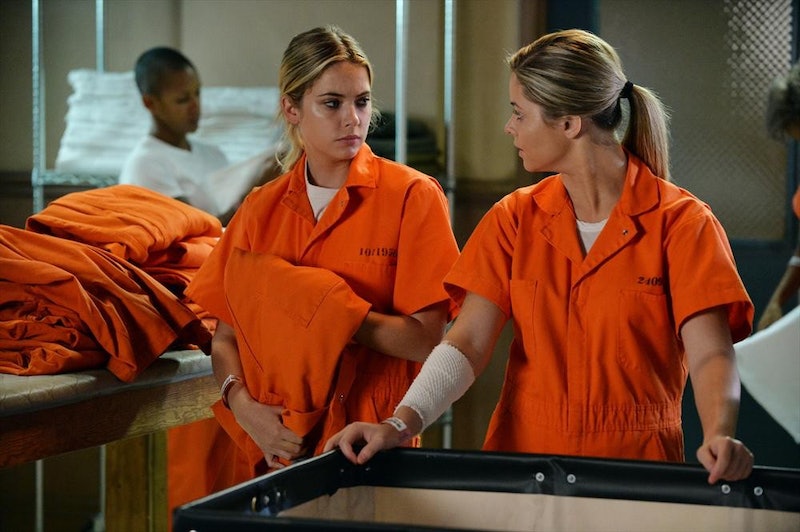 Orange may be the new black, but that's not very comforting for Alison DiLaurentis, who is currently sitting not-so-pretty in a jail cell for a crime that she (probably) did not commit. Now that the little liars have learned that their ultimate frenemy was out of town when Mona Vanderwaal was murdered, the girls are determined to find the real culprit so Ali can go free. Unfortunately, springing Ali from jail doesn't seem to be going all that smoothly. According to the new photos from upcoming March 10 Pretty Little Liars episode "The Melody Lingers On," Hanna and Ali will be side by side in prison. According to the episode synopsis, the girls (and Caleb) will help search for clues to clear the imprisoned Hanna's name. Yikes — talk about a bad way to end senior year.

We know Hanna will be in prison, but how exactly she ends up there is still a mystery. We have two more episodes to go until March 10, and plenty of awful things can happen to land Hanna in the slammer between now and then. So how could Han have ended up in orange? This is the land of A, so anything is possible but I've got a few theories.

Ali planted evidence on her.

Just because Ali didn't kill Mona doesn't mean she's a good person — or even not a murderer. Ali could have killed Bethany Young or hired someone else to do so. Plus, this is the friend who made fun of her insecure pal's weight for years by calling her "Hefty Hanna" — sure, it's not framing someone for murder, but it does prove that Ali isn't really the nicest girl on the block. Whether Ali is truly evil is besides the point — this is a person who looks out for number one, and she'll gladly throw anyone under the bus to get her way. If Hanna is arrested for Mona's murder, it could help Ali's case — even if the prosecution thinks they were in on it together.

We don't know A's motivations for torturing the girls, but it seems that his (or, perhaps more likely, her) beef with the little liars doesn't seem to be ending anytime soon. And it's not just Aria, Hanna, Spencer and Emily that A despises — Alison is very much on A's radar. My theory? That A is hurting the girls because of their one-time friendship with Ali, and wants to pick them off one by one. We know that A has access to Hanna's blood and mixed it in with the Mona evidence — one phone call to the cops and Hanna would be in major trouble. If A put both Ali and Hanna's blood on Mona's clothes, then it would make sense for both girls to be behind bars.

Hanna got herself arrested to help Ali.

Is this a good idea? No — but the liars, and Hanna, have had pretty bad ideas before. If the girls can't get Ali out of jail from the outside, then they may try to find a way to help her by putting one of them inside prison with her. Could PLL go all Prison Break on us? It's possible — though if I'd trust anyone to successfully bust out of prison, it would be Spencer, not Hanna. (Sorry, Han.)