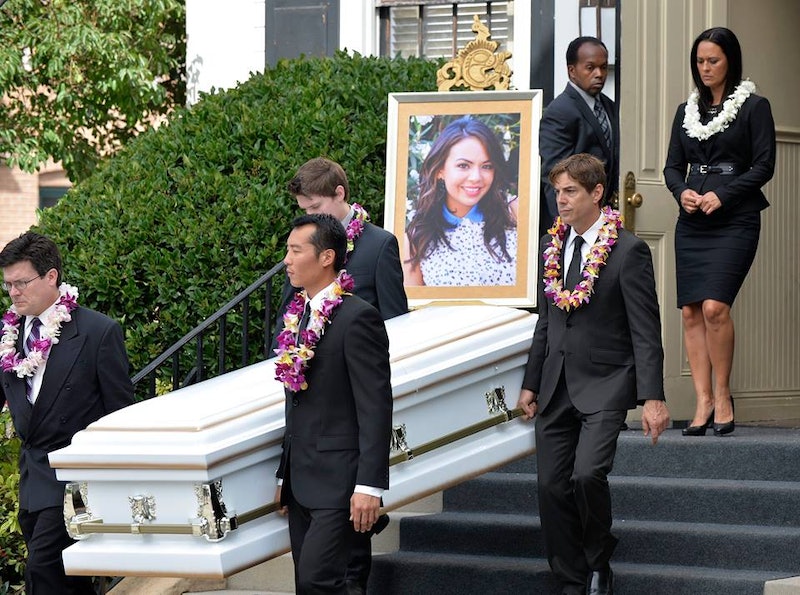 Well, congratulations to all of you Pretty Little Liars theorists out there, because we finally learned the missing piece of Mona's story. And we also learned one, very important detail — Mona is definitely dead on PLL , but that almost wasn't the case. During Tuesday night's new episode, "Pretty Isn't The Point," Mike revealed Mona's big secret and why he's been acting so shady for the past few weeks. Basically, Mike's been in denial — much like the rest of us — that "A" actually killed Mona during the series' summer finale. And now we all know what the truth probably is. I mean, this is PLL after all, people.

According to Mike's big reveal during the final moments of Tuesday's episode, Mona was planning to fake her own death to help the liars. Yes, you heard that right — Mona Vanderwaal had good intentions even though it was creepy as hell that she'd been drawing her own blood and keeping the vials in the mini fridge in her bedroom. (If there's a criminal mastermind on TV that's more apt than Mona, I'd be surprised.) In a flashback that showed Mike catching his then-girlfriend in the act of setting up her impending death, Mona revealed her master plan to frame Ali for her murder, find out "A"s true identity, and return home as a hero that made Rosewood safe again.

Sounds great, right? Well, things definitely didn't go that way — which explains why Mike was leaving bags of gumdrops on the bridge and acting like the shadiest of shady Rosewood men. If what PLLimplied on Tuesday night is true, Mona's plan failed because "A" realized that they were about to be double-crossed and they decided to take her out for good instead. And Mike's just been in denial this entire time because, well, there still is no body to prove that Mona's actually left the land of the living (OK, fine, fans saw it, but no one in Rosewood has).

Mike's erratic behavior has been all about keeping a shred of Mona in tact because it's easier to believe that she had to change her plan than it is to believe that she's gone. So, now what? Does Mike become "A"s new target? Or will it be Aria now that she and her brother have decided that sharing is caring and they're sticking together? Either way, Mona's totally out of this picture and PLL's unsurprising reveal was the missing piece we all needed to throw the "Alison is 'A'" theory out the window. So, again, we're left with two questions: Who the heck is "A" and will we actually find out the answer in four episodes' time?