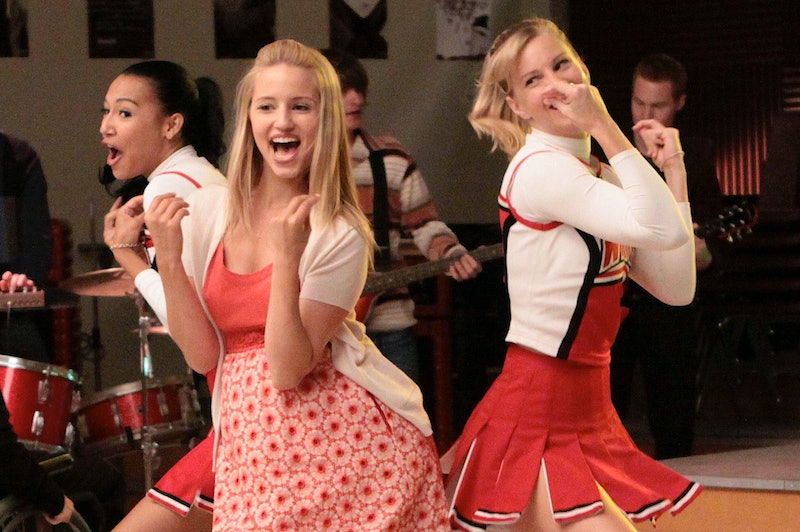 Friday night's episode of Glee, fittingly entitled "Wedding," featured the moment many of us Glee fans have been waiting for since who even knows when: The reunions of Brittana and Klaine in one of the greatest double weddings on TV. But during all of the sweet, joyous, boisterous festivities, one thing was very clearly missing: Quinn Fabray. The head cheerleader and leader of the Unholy Trinity was mysteriously missing from the double wedding and her presence was certainly missed. In fact, it actually makes no sense for her not to be there. So where was Quinn?

The most logical answer was that Dianna Agron was unavailable for the shooting of this episode. We've already seen Quinn in two episodes in the sixth season of Glee , and it seems likely that she'll be in the show's series finale as well. But why couldn't she make time for this particular episode? She was probably filming for one of the other films in which she will appear in 2015, including the Sundance film Zipper alongside Patrick Wilson, and the film Headlock from writer/director Mark Polish. But couldn't the Glee writers have at least given us a reason in the script for Quinn to have to miss the wedding of two of her best friends. Because Glee did not do this for us, I have taken it upon myself to do so.

The simplest possibility is that maybe Quinn and Santana lost touch despite their high school friendship and their hook up. Even Santana told Rachel at one point in Season 5 that she didn't really have a lot of girl friends in high school. "Brittany doesn't count cause I was in love with her. I guess I had Quinn but the fact that she lives an hour away and I never thought about calling her should say something to me."

But even if this was the case, there were people attending the wedding (like Sue who figured out a way in by convincing Santana's abuela to come) who never really seemed to be that close to the couple. Plus, wouldn't Brittany have insisted Quinn come in the first place?

So the next possible scenario is that Quinn was just unable to make the trip to Ohio from Yale thanks to timing not working out and having other responsibilities that would not allow her to leave school just yet. I mean, not everyone can be like Kurt and have work study at McKinley High School. Not everyone is that cool.

But let's just be honest and say what we're all thinking. Quinn very specifically told Rachel time and time again to get out of Lima, sever her ties and start a fresh new life that would give her all the success and happiness she could ever want. Perhaps Quinn took her own advice once she was admitted into Yale. Perhaps she finally gave herself the fresh start she never thought she could get. If that's the reason behind her absence, it makes me sad to not see her revel in the Brittana and Klaine joy, but I'm glad she is ready to live her independent life.