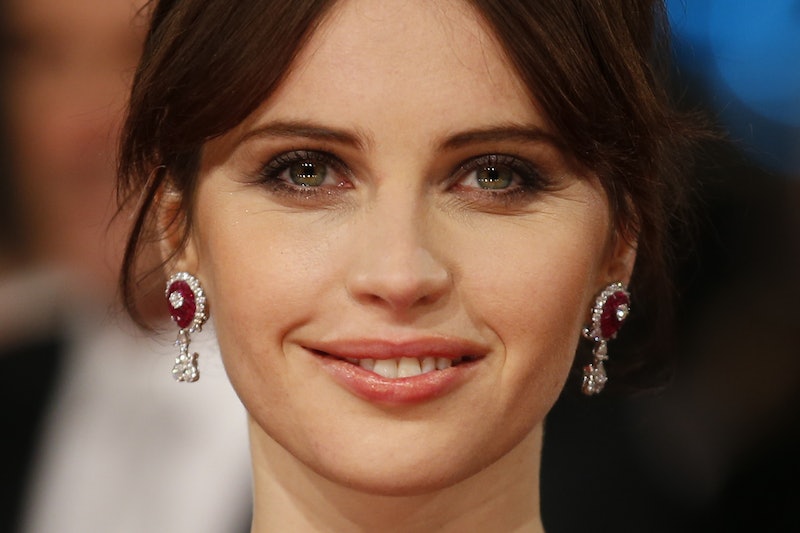 Felicity Jones is, in a word, darling. She's beautiful and charming, that much is obvious, but her talent is truly breathtaking. If you've seen her performance in The Theory of Everything, odds are that you were moved to tears more than once. Jones is nominated for Best Actress for her role in the film at this year's Academy Awards and, based on her past red carpet appearances, Jones is pretty much a shoe-in for the top spot on many, many best dressed lists. Jones' Christian Dior moment at the 2015 Golden Globes was overwhelmingly chic, and while her Critics Choice Awards gown wasn't quite as popular as the Dior number, it was still memorable. But nothing, and I mean nothing, beats Jones' 2015 Oscars gown.

Jones' dress was designed by Sarah Burton for Alexander McQueen, and no matter what your predictions were for her look, prepare to have your mind blown. The high-neck, embellished dress was a departure from some of Jones' more simple looks of the past (think: bold colors and smooth fabrics), but looked gorgeous with her fair skin, simple makeup and swept-up hair. Jones has a big, big fan base when it comes to her red carpet fashion choices, and her decision to go with this stellar McQueen certainly didn't disappoint (I'm one of those many fans, by the way).

While Jones wore a more flowy Dolce & Gabbana gown to the Critics Choice Awards, it's safe to say that bold, structural dresses are her strong point. Simple patterns and stunning silhouettes work well on Jones as they complement her natural beauty. Compare her Critics Choice dress with her Golden Globes and The Theory of Everything premiere gowns, and you'll see what I mean.

The first ensemble is pretty, but doesn't do much for the actress. But the other two make you do a double-take every time. Sure, they're a little... large, but something about the juxtaposition of such intense shapes with her soft features just works. You would think they would overwhelm Jones' small frame, but the big silhouettes and the saturated colors suit her perfectly. And this brings us to Jones' 2015 Oscar gown in all its glory:

I kind of think that neckline says it all, doesn't it? The detail, the color, the BEAUTY of it all. It's gorgeous. And, honestly, Jones is so charming that even if you're not the biggest fan of the outfit, it's hard to dislike anything she wears.