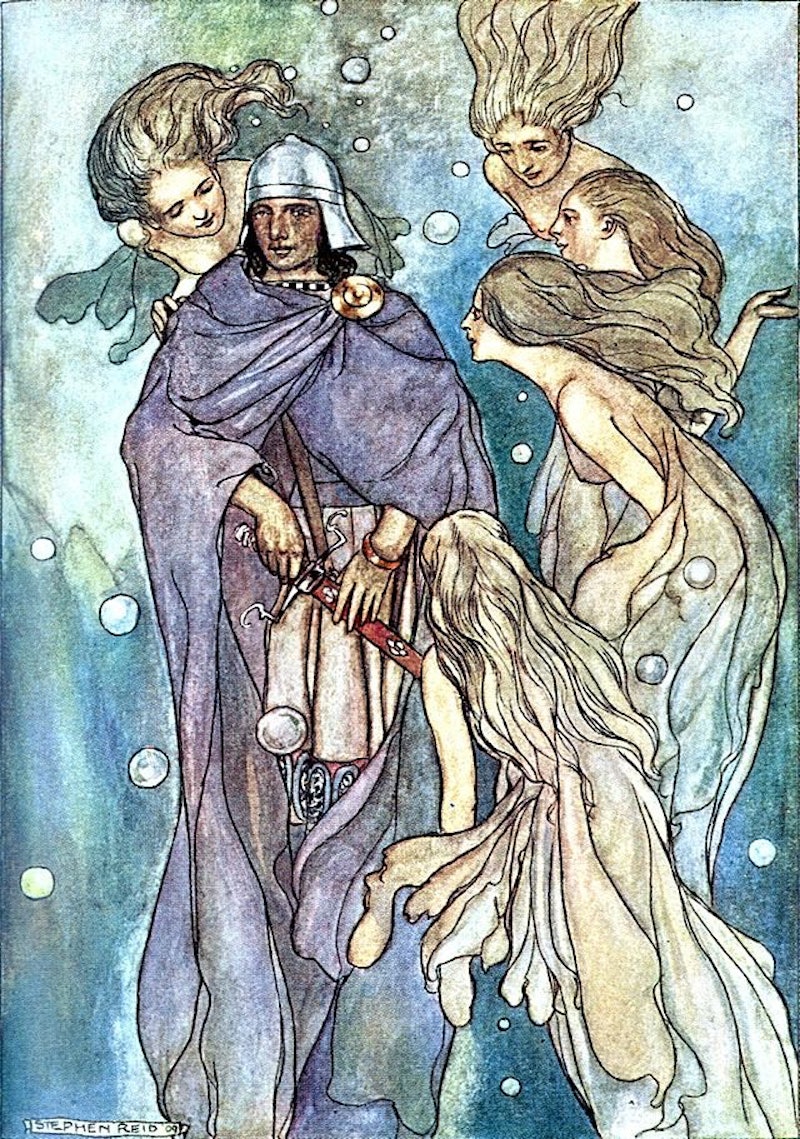 The modern fairytale of the Little Mermaid we know from Disney is pretty charming, if a bit demented. Cute redhead with an obsession with the human world and some musical sidekicks rises to the surface, wins a prince's love after a series of obstacles, gets married, all is well. But the original version of The Little Mermaid, by Danish author Hans Christian Andersen, isn't the sort of thing you want to read to small kids enamored by the sea. It is seriously scary.

For one, it's got a lot of religious subtext; for another, the prince is a complete jerk, as opposed to Prince Eric, who's just kind of stupid. And, most importantly, it's a seriously gruesome tale. People dissolve, get stabbed, get oysters attached to them, and all manner of other charming fates. The sea witch isn't the enemy, human (and mermaid) nature is. It puts Copenhagen's famously winsome statue of The Little Mermaid in a wholly different light; is she about to die horribly, or just thinking about murdering somebody?

If you've always loved Ariel and her hair-forks and attempts to kiss people in boats, look away now. Andersen's tale is not a place where evil meets a fitting fate and good people get justice. If you're feeling brave, though, here are nine ways the original gets seriously dark.

1. The original little mermaid is tortured by oysters.

The original tale has much the same set-up as the Disney film — youngest daughter in a sea-palace run by the king of the mermaids, mildly obsessed with humans — but her royalty is quite literally a pain. When she comes of age, the mermaid (who has no name) isn't only allowed to rise to the surface; she has to suffer through eight oysters attaching themselves to her tail. "Pride must suffer pain," is her grandmother's sharp rejoinder when she complains. I'd run off to become a human too.

2. Her older sisters sing about the joys of drowning sailors.

The mermaid's many older sisters are actually pretty lovely in the end, but they're dangerous beasts; apparently one of their chief pastimes is singing to sailors about how they shouldn't be afraid of being underwater, because it's such fun. They don't seem to be doing it to be deliberately awful though — we just get the impression they're kind of dumb.

This comes up a lot. Mermaids live to 300, but once they die, they're gone. Humans get a piddling little span, but Andersen hammers home the fact that they get immortal souls that live forever, and so are clearly superior beings. Half the reason the littlest mermaid wanders off in pursuit of legs is to nab herself a soul, not just the prince.

4. Once she's a human, the mermaid has to either get married or die.

The options available to Andersen's mermaid are pretty scant. In the film, she has to get true love's kiss or turn back into a mermaid and become Ursula's slave. In the original story, however, she has to convince the prince to marry her — or she'll die. And because of the pesky no-soul thing, she'll be gone forever. It's a pretty raw deal.

5. Going human feels like she's getting perpetually cut up by knives.

No charming transformation for the mermaid from fish to human. Not only is she voiceless, every step on her tootsies causes her agony; the sea-witch describes it as "walking on knives." She seriously has the odds stacked against her. Who can be seductive when they're silently having their feet stabbed?

6. The prince is a patronizing jerk who treats her like a literal pet.

Andersen's prince is a condescending nightmare. He lets the mermaid sleep at the foot of his bed (no, seriously) and calls her his little foundling. He loves her "as he would love a little child," apparently — the creepy vibes are strong with this one — and Andersen even inserts a scene where he tells his dumb little foundling friend all about the wonders beneath the sea, because he knows so much about them. That is some spectacular mansplaining right there.

7. She doesn't get the dude — and has to dance at his wedding.

Not only does the little mermaid face the prospect of dying — and, lest we forget, not living forever after death, because she has no soul — because she couldn't win the love of her idiotic prince, she has to dance on his wedding barge. That's just sadistic.

8. She can only avoid dissolving into sea foam if she kills the love of her life.

The story's end gets both weird and dark. As the little mermaid contemplates dying — which will mean dissolving into sea foam, rather than just falling over dead like a human — her sisters pop out of the water, having traded their hair with the witch for a magical knife.

Guess what she has to do with it to live. If you guessed "kill the love of her life as he lies on his marriage bed", you have guessed correctly. The mermaid throws the knife away and prepares to meet her fate.

9. The 'happy ending' is a purgatory.

So you'd expect our heroine to be saved because she chose to save her true love, right? Nope. She doesn't dissolve, but she's only rescued by things called "daughters of the air," who tell her that she's now one of them — congratulations! — and that, if she flies around the world doing good deeds for 300 years, she might get a soul after all. This story should just be called The Little Mermaid Gets A Series Of Really Raw Deals.

More like this
Jennette McCurdy’s First Kiss On 'iCarly' Didn’t Go As Planned
By Bustle Editors
The Viral 'Little Miss' Franchise Is Focusing On Mental Health Next
By Darshita Goyal
The Biggest Differences Between 'Bullet Train' & The Book It’s Based On
By Arya Roshanian
At 28, Lesley Manville Was Acting, Picketing, & Singing Kate Bush Songs
By Olivia-Anne Cleary
Get Even More From Bustle — Sign Up For The Newsletter