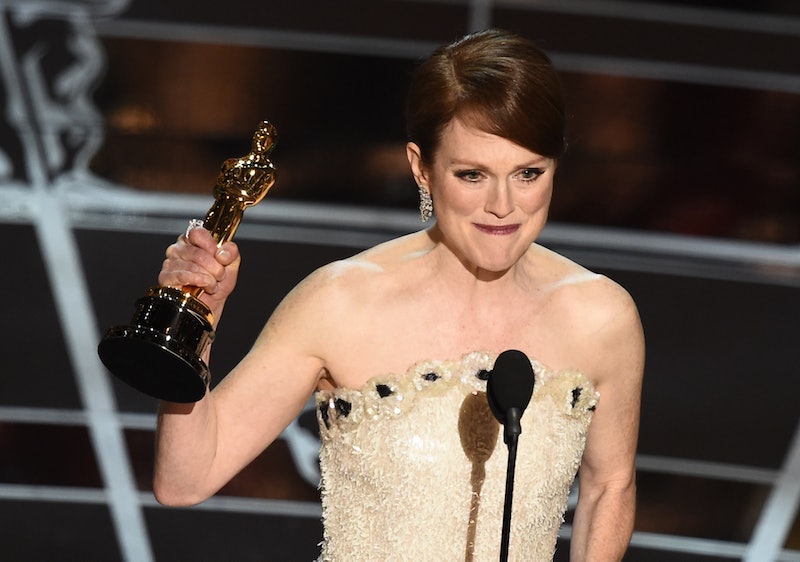 When it comes to awards shows, there's none quite as grandiose as the Oscars. It's basically the final frontier of awards season: Everything in Hollywood this past year has been leading up to this moment, and now that Oscars night is finally here, the industry is playing it up in a big way. However, as fun as it can be to watch the extravagant celebration that draws Hollywood's most elite from their California mansions and billion-dollar fortresses, the problem with "grandiose" celebrations is that the biggest awards (aka, Best Actress, Best Actor, Best Picture) are often times left for the end of the night, likely as incentive to make people stick around for the whole show (because if you haven't noticed, it is really long).

Of course, we always do stick around — after all, it's the Oscars, and this is the big award! And, luckily, now it's finally here: The award for Best Actress at the 2015 Oscars was just announced, and, considering the category was stacked with deserving nominees like Marion Cotillard (Two Days, One Night), Felicity Jones (The Theory Of Everything), Julianne Moore (Still Alice), Rosamund Pike (Gone Girl), and Reese Witherspoon (Wild), it was a close race up until the very last moment.

So, who took home the big award? None other than Julianne Moore, for her role in Still Alice.

Upon taking the stage to accept the big award, Moore gave a moving speech that simultaneously celebrated her fellow nominees — an amazing group of women — thanked all those close to her, and shed light on how films like Still Alice are instrumental in teaching the public about diseases alike Alzheimer's.

More like this
9 Films About Mental Health To Watch On Netflix UK
By L'Oréal Blackett and Sophie McEvoy
Laura Dern Said “Cultural Awareness” Made Her Rethink This 'Jurassic Park' Fact
By Grace Wehniainen
Colin Firth Revealed His Favourite Mr. Darcy (& No, It's Not Himself)
By Sophie McEvoy
Watch The Dramatic First Trailer For Netflix's Jennifer Lopez Documentary
By Alyssa Lapid
Get Even More From Bustle — Sign Up For The Newsletter