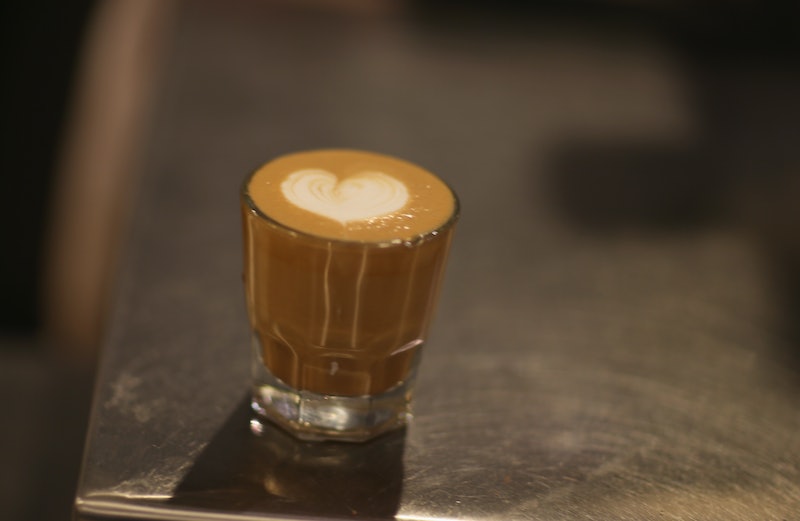 Dietary guidelines change every few years, but for the past few decades everyone's been recommending against high-fat and high-cholesterol foods... until now, of course, or you wouldn't be reading this. The Dietary Guidelines Advisory Committee, which advises government agencies like the FDA, has new advice on healthy eating, and while most of their recommendations aren't exactly groundbreaking, their stance on coffee and sugar will seriously confuse your coffee order.You probably won't be surprised to hear that the panel isn't a huge fan of added sugar in your diet. According to Bloomberg, it's recommended that sugar take up 10 percent or less of all calories, but currently Americans get an average of 13 percent of their calories from sugar. Even though that's a lot lower than I expected our sugar intake to be (must be all those ultra-healthy fitness bloggers making us look good), it's still not ideal. In fact, the panel suggested that the government adopt the taxation on sugary food and drink that was implemented in Berkeley last year, writing that it would "encourage consumers to reduce consumption and revenues generated could support health promotion efforts," Mashable reports. It's a pretty solid strategy, even if I don't know how well it would hold up during Girl Scout season. I'll pay any price for Thin Mints, dammit, up to and including my firstborn child.

Other recommendations included removing a warning on cholesterol, and the usual suggestion to stay away from sodium. The most surprising development is the panel's position on coffee, the benefits of which have been the subject of quite a few studies over the past few years. Despite what you'd think, three to five cups of coffee a day isn't associated with any health risks — in fact, it's pretty good for you, which is great news since the U.S. spends $40 billion on coffee every year. According to Bloomberg, it's associated with "reduced risk for heart disease and type 2 diabetes," although committee member Tom Brenna was quick to remind us that it's not a miracle cure.

So all you black coffee drinkers can rest easy in the knowledge that you're actually helping your body every time you drink your afternoon pick-me-up. As for everyone else who's used to delicious sweet Starbucks lattes, are you freaking out? Because I'm freaking out.

But don't throw away your gold card in terror just yet, because there's good news. Luckily for you guys, I've worked at Starbucks, so I have a few recommendations in case you want to cut back on sugar without having to give up your addiction.

You may or may not know this, but Starbucks drinks are hella sugary. A tall flavored latte gets three pumps of syrup, and it only goes up from there. So if you're trying to be healthy without giving up your chance to try that new Caramel Flan latte, just ask your barista for fewer pumps of syrup (one or two is usually enough for me).

You might know this by its other name, the cafe au lait, which is just coffee and steamed milk. There's no sugar in it, but there's so much milk in the drink that you don't even need it! Plus, you still get to wait in line for your drink like everyone else, so you can pretend like nothing has changed.

3. Go for the chai brewed tea

If you're a chai latte fan, I'm sorry to tell you that the chai tea base is pretty sugary (a grande has 42 grams!). Try getting the brewed tea instead, which is made from tea bags, and if you want it to feel like a latte, ask for some steamed milk. If it's still too bitter, at least this way you can control how much sugar you put in the drink.

If you absolutely cannot handle the thought of giving up all the syrup in your lattes, there's almost always a sugar-free version. I hesitated to include this, considering artificial sweeteners' checkered past, but the option is there.

There you have it! It's possible to avoid sugar and still keep your Starbucks addiction going strong. Who would have known being a barista would come in so handy?