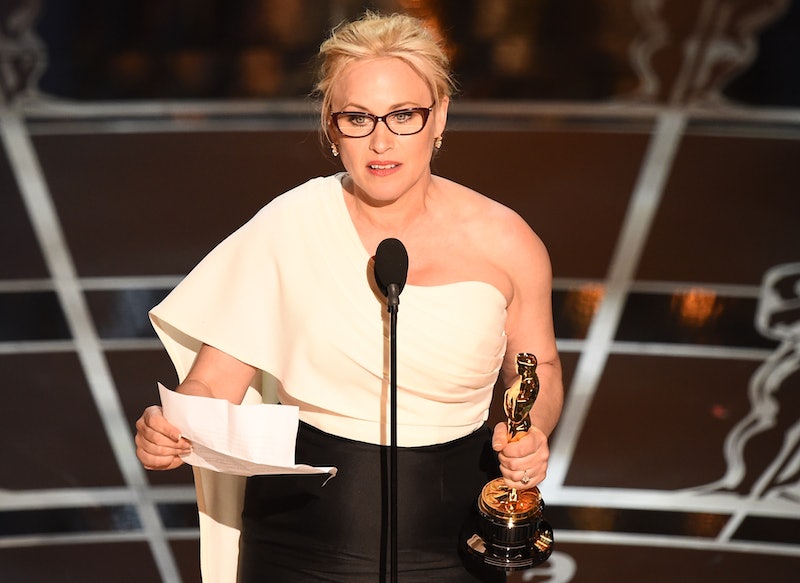 You know it's been an excellent year for women in film when an awards category is so stacked with rich, dynamic performances, not even Meryl Streep can be considered a frontrunner. That's exactly what happened with the Best Actress in a Supporting Role category at the 2015 Oscars, as awards favorite Streep was nominated for her role in Into The Woods, and faced serious competition from the four actresses recognized alongside her. In the end, Boyhood star Patricia Arquette won the Academy Award for Best Supporting Actress, beating Streep, first time nominee Emma Stone for Birdman, Laura Dern for Wild, and Keira Knightley for The Imitation Game. Fittingly, after winning the category filled with a group of tremendously talented women, Arquette used her acceptance speech to draw attention to an important issue that affects all women: gender inequality.

Arquette started off like any other award winner, thanking her family, everyone involved behind the scenes of the films, and her co-stars, but then switched gears in a very exciting way. Read the full transcript of her speech below, which she read with such passion, audience members cheered and even leapt to their feet as she ended on a strong, empowering note.

Jesus. Thank you to the Academy, to my beautiful, powerful nominees to IFC, to Jonathan Sehring, John Sloss, Cathleen Sutherland, Molly Mann, David Dicamila, our whole cast and our crew, my Boyhood family who I love and admire, our brilliant director Richard Linklater, the impeccable Ethan Hawke, my lovelies Ellar Coltrane and Lorelei Linklater. Thomas and Paul, thank you for giving me my beautiful children. And Enzo and Harlow, you're the deepest people I know. My friends who all work so hard to make this world a better place. To my parents, Rossano, Richmond, Alexis, and David, to my favorite painter in the world, Eric White, for the inspiration of living with a genius, to my heroes, volunteers and experts who help me bring ecological sanitation to the developing world with Givelove.org.

To every woman who gave birth, to every taxpayer and citizen of this nation, we have fought for everybody else's equal rights, it's our time to have wage equality once and for all, and equal rights for women in the United States of America.

Fellow nominee Streep was especially moved by the speech, showing her support from the audience.

I hope the millions of people watching Sunday night's broadcast don't forget Arquette's message when the Academy Awards come to an end. Watch that final, inspiring moment below, followed by the entire speech.