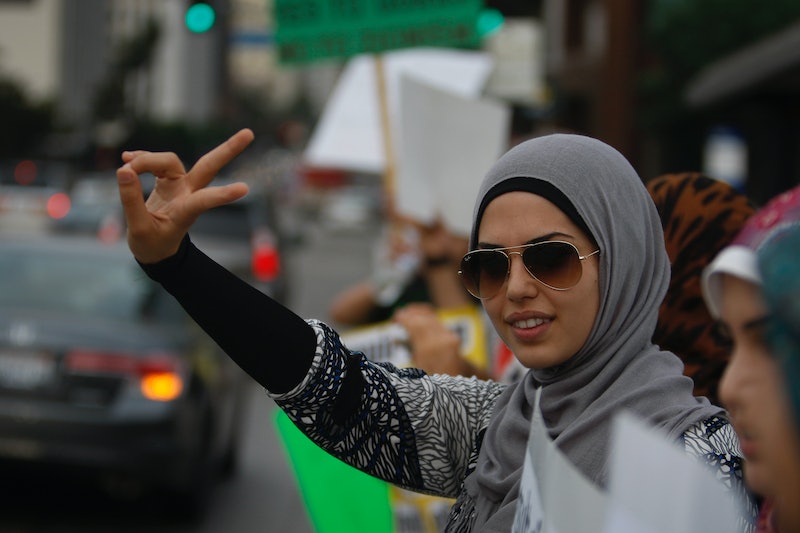 With all of the violence that has been happening in recent months, the tension among faiths has been palpable. There were two shootings in Copenhagen — one of which was at a Jewish synagogue — three Muslim students were killed in North Carolina, and the Charlie Hebdo aftermath saw a gunman kill four men at a kosher deli in France, showing some severe strife among the Muslim and Jewish communities. But on Saturday, Muslims responded to the displays of Islamophobia and anti-Semitism. More than 1,000 Muslims gathered outside a synagogue in the Norwegian capital of Oslo to create a human shield, or “ring of peace,” around the Jewish place of worship.

More than one thousand people joined hands, encircling the synagogue in a symbolic shield of protection and chanting "No to anti-Semitism, no to Islamophobia." Event organizers and attendees and Jewish community leaders stood side by side. Muslim immigrants and ethnic Norwegians filled the streets. Reuters reported that one of the protest organizers told a crowd, “Humanity is one and we are here to demonstrate that.” The organizers of the event wrote on Facebook:

Muslims want to show that we strongly condemn all type of anti-Semitism and hatred towards Jews. And that we are there to support them. Islam is to protect our brothers and sisters, independently of what religion they belong to.

Norway is a prime example of the organizer’s avowal that there are “more peace mongers than warmongers” and that there’s hope for peace to someday exist between people of all religions. While Norway’s Jewish community is one of the smallest in Europe, it has been steadily growing. Reuters reports that the immigration trend caused tensions to come to a head in 2011, when Anders Behring Breivik killed 77 people in a series of attacks. Breivik had accused the government of "facilitating Muslim immigration and adulterating pure Norwegian blood."

Since that incident in 2011 though, support for immigration has risen significantly and continues to rise. Reuters reports an opinion poll taken last year found 77 percent of people thought favorably of immigrants and thought they made notable contributions to Norway.

Hopefully this “ring of peace” in Oslo spreads Norway’s attitude toward Muslim immigrants and ethnics throughout the rest of Europe, and the world. The organizers are right – there is “still hope for humanity, for peace and love, across religious differences and backgrounds.”