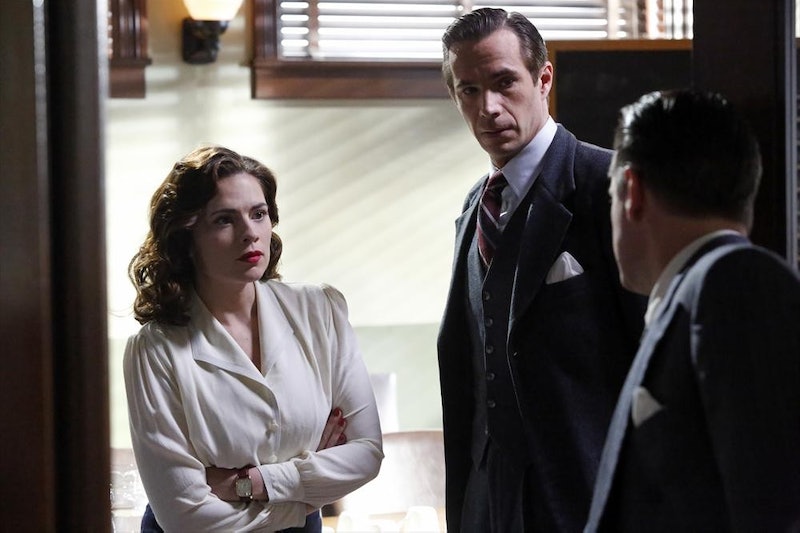 It's hard to believe that Agent Carter is almost done already. I feel like it just started. But that's what happens when you have a limited series; just when you've started to rely on having it regularly on the DVR, it's gone. But are the chronicles of the S.S.R. doomed to always be so short? If it came back for a second season, would Agent Carter still be a limited series?

This is purely hypothetical, of course. Right now, there's still no announcement that Agent Carter will have a second season at all, even though the odds look good. Still, if it does come back, ABC will have to decide if eight episodes are enough, or if it the order should be bumped up into the 20s, like fellow Marvel series Agents of S.H.I.E.L.D. I, for one, would enjoy as much Peggy Carter as I could possibly get my hands on, so I'm hoping for a bigger second season.

Chances are, though, I'm going to be disappointed, and Agent Carter will remain a limited series if it returns. Maybe the episode order will be increased from eight to 10 or 13, but it's doubtful it'll be more than that. Here's why, when it comes to Agent Carter, less is more.

Some of the best television series out there, like Fargo and True Detective, voluntarily limited themselves to tell a single, focused narrative. That's the type of storytelling the Agent Carter creatives are looking to do, too. "We like the mini-series [format of] eight, ten or 13, or somewhere in there," executive producer Louis D’Esposito told Collider when asked about a second season. "I think it allows us to get deeper into whatever story we’re trying to tell and deeper into the characters. It’s a lot of work to do 22 episodes, especially because I’m on the studio side, too, with Kevin [Feige]. It would be a tremendous amount of work."

Tara Butters, one of Agent Carter's showrunners, agrees. "I think any type of heavily serialized show, you're going to get better scripts with fewer episodes," she told The Hollywood Reporter. "Now, whether that's eight, 13 or 15, the fact is, you're just going to get a more cohesive, thorough line." So as much as we have an unlimited appetite for Agent Carter, it's like dessert — you have to pace yourself, and too much might make you feel worse.

Setting a television series in the 1940s may give Agent Carter half its mojo, but it's also more expensive. Then again, we know Peggy Carter lives a long life — they don't have to keep her in the 1940s. "I think the great thing about the fact that I’ve already played her at the end of her life means that we know…she says in the scene she’s lead a full life and we know that she would have gotten married," star Hayley Atwell told IGN. "She would have had children. She had a happy home life as well as a work life. That’s what’s great about the situation we have now, is that we have an opportunity, if the show does go into second and third and fourth and fifth season, we know that we can explore all of these aspects of her character because we know she lives such a long life and she’s had a fulfilled life." Still, chances are she won't be transported to 2015 right away, so the series will probably stay in some time period in the past — making it too expensive to bring to a full series.

The Cast Is Doing Other Things

Would you want an Agent Carter without Howard Stark? Dominic Cooper can't be locked into a 22-episode series; he's off doing movies like Warcraft. Even Atwell is off doing movies, albeit other Marvel ones, like Avengers: Age of Ultron and Ant-Man. If you're going to cast movie stars, you have to be resigned to the fact that they're not going to be around for 22-episode TV series.

That's okay — I'll take any Agent Carter I can get.