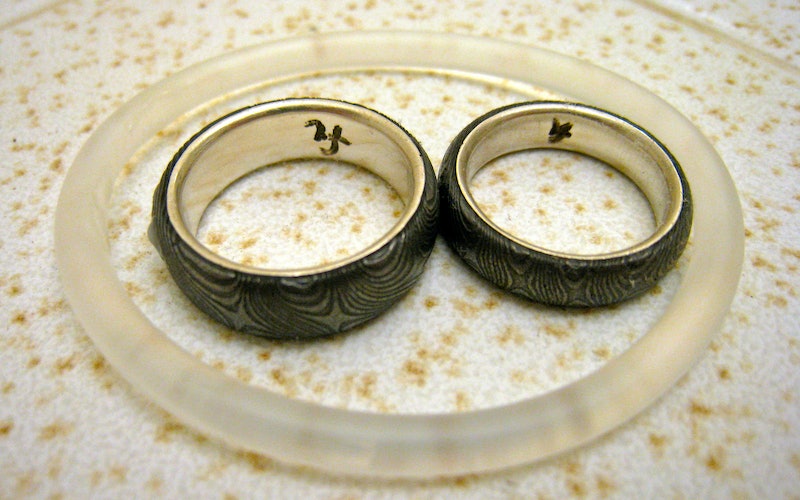 We at Bustle love giving you tips for how to tap into your sexual potential and troubleshoot when things aren’t going your way in the bedroom. But what about finding solutions to those stressful sexual health situations that inevitably crop up when you’re getting down? Emma Kaywin, a Brooklyn-based sexual health writer and activist, is here to calm your nerves and answer your questions. This week’s topic: how hormonal birth control rings (or the NuvaRing) work.

Q: I’m trying to decide what birth control to get, and one of my friends told me about the NuvaRing. I’m super intrigued, because it seems less intense than a shot (I hate needles) and I don’t have to think about it every day like the pill. But what’s the deal with it — how does it work, is it safe, and does it work as well as other options? Also, does it disrupt things when you’re having sex? Because it’s, like, up there?

A: Vaginal birth control rings are definitely a compelling method of birth control. You only have to think about them once a month (well twice if you count putting them in and then taking them out) and they are very effective in preventing the creation of a tiny human, if used correctly. Here's what you need to know before you get one.

What Is the Birth Control Ring?

The contraceptive ring (often called by its brand name NuvaRing) is a small, flexible plastic ring about two inches in diameter. (Bedsider describes it as kind of like a stiffer jelly bracelet from the 90s … just to help you visualize it.) You fold the ring in half and put it up inside your vaginal canal and leave it there for three weeks, then take it out for the fourth week (when you would usually have your period).

How Does it Work?

The vaginal birth control ring may look like just a piece of plastic, but it’s got powerful hormones inside that are designed to make sure you don’t get pregnant. It does this by releasing two hormones into your bloodstream: estrogen and progesterone. These chemicals are always naturally in your body — they’re what dictate your menstrual cycle.

Putting high, steady levels of these hormones into your body stops ovulation, because your body doesn’t experience the low levels of both estrogen and progesterone that trigger your monthly egg drop. These hormones also thicken your cervical mucus, which makes it harder for sperm to travel up your vaginal canal to canoodle with your egg. Finally, they change your uterine lining, making it harder for a fertilized egg to attach and get fed and nurtured into a full tiny human.

How Effective Is It?

The ring is a very effective method of birth control. If used correctly, less than one in one hundred people will get pregnant in a year. If used correctly most but not all of the time (we are humans, after all), that number goes up to around nine in one hundred. (If you want to see how this method stacks up against others, check out Bedsider’s handy dandy comparison matrix.)

But how can you get pregnant using the ring? Well, it’s fine if your ring falls out for a bit or you take it out during sex, but you need to put it back within three hours, or your body can start becoming fertile again. You also need to keep your ring in for three weeks in a row, and then take it out — (if you want to not get your period, you can put another one in right away, but don’t keep the same one in for longer than three weeks because it will stop working). Finally, if you forget to put in a new ring after your week off, your body won’t have the necessary levels of hormones to keep you from getting pregnant.

What Are the Side Effects?

Most of the ring’s side effects are similar to other methods of hormonal birth control, like the pill. Reactions like bleeding in between your regularly scheduled periods, tender breasts, nausea, and vomiting generally stop after the first two or three months. Longer lasting side effects can include more vaginal discharge, vaginal irritation or infection, headaches, depression, and decreased libido. And something very important to note: significant research has been coming out lately indicating that the NuvaRing increases the risk of blood clots.

The ring must be given to you by a doctor, so ask about all these side effects before you start (gosh I sound like an ad! But seriously … talk to your gynecologist and make sure you’re comfortable with these risks, for while they are low, they are real).

Will I Still Get a Period?

When you’re on the ring, you still bleed each month, but it’s not, technically speaking, your period. Menstruation is triggered by decreased levels of estrogen and progesterone, which break down the lining of your uterus, causing it to run for the hills and into your panties. Since the ring has been flooding your body with high levels of these hormones, this lining breakdown doesn’t happen and so you don’t menstruate.

So what’s all that blood? What’s actually happening during that week when you take your ring out is called withdrawal bleeding, same as on the pill. This is your body going into withdrawal as it loses the levels of hormones it’s gotten used to during the rest of the month, when your ring was in. Withdrawal bleeding is often shorter and lighter than your natural period, because the hormonal birth control has suppressed your uterine lining from thickening, so there literally isn’t much to shed. Withdrawal bleeding usually starts two or three days after you take out your ring.

Remember that if you don’t want this monthly fake period, you don’t need to have it! You can use the ring continuously — you just have to remember to swap them out every three weeks so they remain effective.

You and your partner(s) will definitely feel the ring up there, because it’s a ring of plastic up your pussy. You don’t need to take it out when you’re having sex, although if you want to, you can take it out for up to three hours — just beware of the post-coital nap!

Many users say their sex life is improved by use of the ring, because they can have sex at any time without worry of pregnancy. (Bedsider has a bunch of interviews with ring users if you want to learn more about individual experiences of all sorts.)

One thing to remember: the ring doesn’t protect against sexually transmitted infections, so if you’re worried about that, you need to also use a form of barrier protection, like condoms.

That's up to you and your doctor. The ring is a great birth control option used by many people to prevent pregnancy. It doesn’t require any daily action, although you do need to use it correctly to ensure baby prevention. Plus, you’re basically wearing secret jewelry in your pussy for most of each month ... that’s kind of exciting right? If you’re interested in this method of contraception, talk to a gynecologist you like about trying it out.