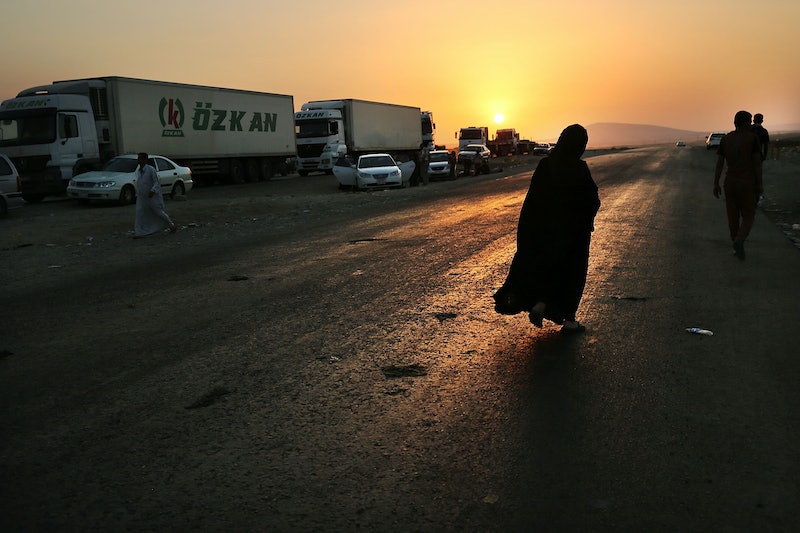 After three London schoolgirls looking to join ISIS were reported missing on Friday, officials have said a young Scottish woman, Aqsa Mahmood, might have recruited the girls for ISIS and played a role in their disappearance. Mahmood, 20, left her home in Glasgow in November 2013 to marry an ISIS militant in Syria. She reportedly communicated with the British teens through Twitter and arranged for the girls — Shamima Begum, 15; Kadiza Sultana, 16; and Amira Abase, 15 — to leave home and travel to Aleppo, Syria.

Security officials, as well as the families of the three young girls, have issued pleas to the girl to return home. The family of Begum said in a public statement, "We miss you terribly and are extremely worried about you. Get in touch with the police and they will help to bring you home. We are not mad at you, we love you." Scotland Yard and counterterrorism police are also trying to contact each of the girls through social media. The three girls were interviewed after another teenage girl, a classmate of theirs, left for Syria in December.

This kind of concern is exactly what followed Mahmood's disappearance in late 2013. Her parents were "heartbroken" at her decision to leave home at age 19 and travel to Aleppo. Mahmood's mother, Khalida Mahmood, told CNN in September 2014 that she was "the best daughter you could have."

"We just don't know what happened to her," Khalida Mahmood said. "She loved school. She was very friendly. I have never shouted at her all my life, all my life." These glowing reports are strikingly similar to those of the three girls currently missing, who were apparently straight-A students. However, since reports have surfaced of Mahmood's potential involvement with the three missing British schoolgirls, her parents have changed their tune, saying she is a "disgrace."

Mahmood's family says UK security officials "failed" to prevent the three girls from leaving London on a Turkish Airlines flight. In an interview with the BBC, the family's lawyer, Aamer Anwar, said they felt "incredulity" that security had not taken "basic steps" to prevent children from leaving and joining terror groups. Anwar said:

We are aware from contacts with Special Branch and the police that her social media contact is regularly checked and regularly monitored. The idea now that a young 15-year-old should make contact with Aqsa, who is regarded as a terrorist, a member of ISIS, yet no action is taken — the family of that girl did not have the customary knock on the front door ...These three girls managed to reach the airport, and the common sense of Special Branch at the airport, UK Border Agency, don't notice the fact that 15-year-old, 16-year-old unaccompanied [girls are] at our airport, going on a flight to Turkey, the staging post to Syria, which is what Aqsa did herself ... they aren't stopped. So obviously the family is deeply distressed and angry, and they want answers. They're thinking, 'How many other families has this been happening to?'