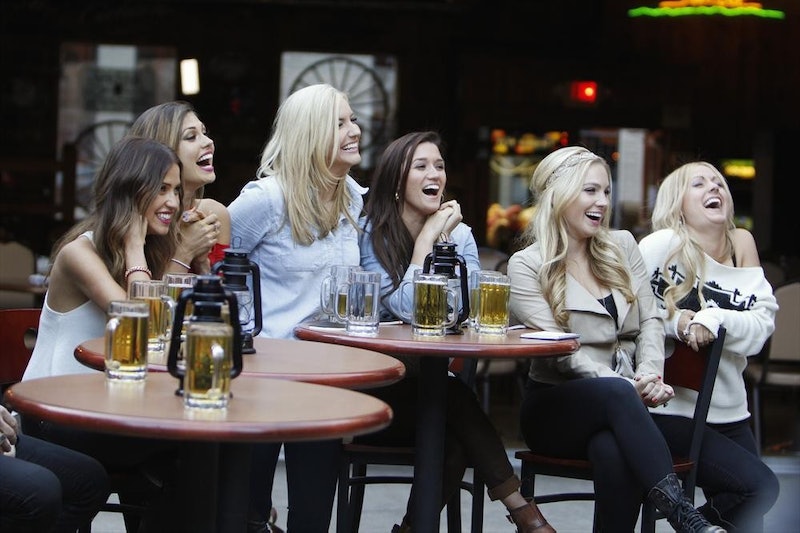 This has been a totally bonkers season of The Bachelor and I feel we must thank Chris for that: he seems to be attracted to his fare share of nuts. Even if he isn't particularly effervescent, the ladies who were brought in to fall for him sure have been. Taking a look at the Season 19 Bachelor contestant bios before the season started, it was pretty easy to split them right down the middle between "Nice Girls" and "Wild Cards." Never did I expect so many of those oddballs to stick around as long as they did, but Kelsey (an unexpected Wild Card, to be fair) is still a very recent memory/nightmare, and Kaitlyn — who said in her bio that if she won the lottery, she'd "buy an island and make it into a land of pirates" — has a Fantasy Suite with her name on it coming up on Monday night. I must say, I've been impressed with Chris' truly eclectic taste in women. But perhaps it's that eclectic taste that's made it especially difficult to choose a frontrunner for the next Bachelorette from his season.

It's not that all of Chris' women have been "crazy," or even that ABC wouldn't welcome a Bachelorette with a propensity for dramatics. It's more that these women can't really be compared to each other, so no one stands out drastically among the rest. The women who are outgoing seem kind of above being the next Bachelorette; the women who seem like they'd be into it aren't the most endearing options; and everyone else is out on the Bachelor house grounds picking pomegranates. But Chris was a surprising pick who's worked out pretty well, so there might be a few good options yet; and a few to steer clear of at all costs...

(Note: When I say "frontrunners," I mean for Chris' heart, not necessarily for The Bachelorette.)

Whitney: Listen, I stand by that if we could handle Katie Holmes for six seasons of Dawson's Creek, then we could handle one season of Whitney's unique voice; but after extensive polling, I have been told I'm the only one who thinks that. And for as much as Whitney has said she was solely in this for Chris, I don't think she'd be very keen on juggling two dozen lugheads over at The Bachelorette. Likelihood: 4, Probaby Not

Becca: The Bachelor got a real kick out of Sean being a virgin, so I imagine they wouldn't be opposed to defining Becca in that way as a Bachelorette too. But while Becca is pretty and charming, all that talk about her not really knowing how to get close with men was a little concerning for her propensity to getting close with a baker's dozen of men. We'll have to see how this (potential) heartbreak phases her. Likelihood: 5, Maybe

The Ones Who Want It

Carly: Carly certainly has a passion for the game. She wanted to be in love with Chris so badly, I think he could have been any reasonably nice sack of corn with a six-pack. "Just wanting to be loved" got Des the Bachelorette spot a few seasons ago, and Carly certainly has a one-up on Des in the personality department. But she's also a little rough around the edges emotionally... it would take some serious grooming to get her ready for the big leagues. Likelihood: 6, Maybe

Kelsey: Can you imagine?! Throughout the Escalation of Kelsey's Madness, my favorite thing to do was spot the segments that Kelsey very obviously thought would be played in her highlights reel when she was announced as the Bachelorette. She was constantly pitching her own narrative with all that "my story is tragic and amazing" business. I truly believed her when she told Chris Harrison that she didn't realize she was such a controversial character. She just thought she was pulling an Emily Maynard: the widow with a heart of gold who just didn't quite click with the Bachelor. And just think how sure she is after that special segment with Chris Harrison! It would be riveting television, but so is Criminal Minds; ABC can't handle that kind of liability. Likelihood: 0, Except In Her Own Head

Britt: Here's what I know about men who go on The Bachelorette: Only about half of them watch the series with enough regularity to really know what's considered "OK" and "Not OK" in the plethora of unwritten Bachelor rules; and they can get past most things for a pretty face. If Brit's final send off hadn't gone down the way it did, she would have a shoo-in. As it is, she seemed pretty irrational, not for wanting her boyfriend to choose her first, but for thinking that was an option on a show like this. The Bachelor audience likes people who understand the game, but don't necessarily play it. Brit was the opposite of that. ABC could find plenty of men who would want to date Brit and she even has the personality for it; but don't expect excited cheers from the audience if she's the name announced at Women Tell All. Likelihood: 7, Pretty Good Chance

Jade: Shortly, Jade is sweet and gorgeous, but entirely to shy to hold down a season of television on her own. Likelihood: 2, Can't Happen

Kaitlyn: Holy moly, what if it was Kaitlyn?! Every woman I know who watches this show wants the next Bachelorette to be Kaitlyn, but kind of can't imagine the show would go for it. But after laying out all the facts, unless they decide to bring in someone new or from a past season, it has to be Kaitlyn. She's the best option: She's funny, smart, outgoing, but apparently, also pretty into this process. At first it seemed like Kaitlyn was going to be a little too cool for all of this (and too cool for Chris), but time has proved that our girl can let her guard down and roll out the "Kaitlyn <3 Chris" billboards with the best of 'em. Likelihood: 9, See You in a Few Months, Girlfriend