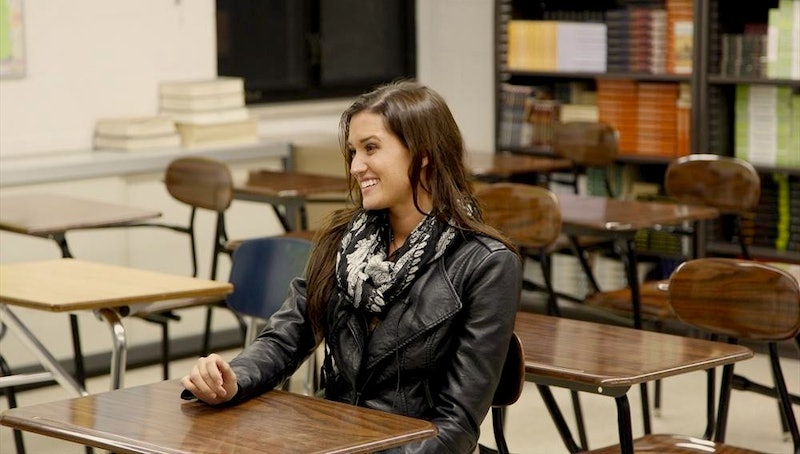 If there ever was a boring season of The Bachelor, Season 19 with Chris Soules, Iowa’s farmingest of all the farm boys, is sure it — until now. One of my favorite contestants is set to blow the lid off this contest by being the first-ever The Bachelor contestant to have posed in nude photos for Playboy : Jade Roper. She goes by Jade Elizabeth in these photos, which I will not link to but I’m sure if you're a good Googler you can find your way to them just fine. The problem is that from the promos, it doesn't seem like Chris takes Jade's confession very well, and I'm worried that Playboy could ruin Jade's chances to be the next Bachelorette.

Don't get me wrong, though. You’ll find no slut-shaming here, that’s for sure: I could really care less that Jade has posed in her birthday suit for an on-the-decline men’s magazine — get down with your bad self, because you only have that body once — but I really can’t believe that the producers didn’t know. Why do I think that they didn’t know? Because no female contestant on The Bachelor has ever had an “I’ve-posed-fully-nude” scandal. We all have the Internet. We all have cell phones — there are surely nudie pics of other contestants that were firmly nipped in the bud, so The Bachelor producers either missed this one or completely changed their age-old strategy. Oh well! Get it, Jade.

Of course, I'd bet 2,000 rose ceremony roses that Jade's Playboy past effectively disqualifies her from being the next lady-looking-for-love on The Bachelorette, which is sad because she was totally a fan favorite. The reason is that The Bachelor has always been weird about female sexuality, and if we look at past Bachelor contestants in the Bachelorette running, a few folks who dared to express themselves sexually were clearly out of the game. Take, for instance, Clare Crawley on Juan Pablo’s season. Clare was definitely a front-runner for the Bachelorette title, but she and Juan Pablo had a tryst in the ocean, he slut-shamed her, and she was bounced from being America’s next sweetheart. Jade merely posed nude, but she’s “sullied” (and I use that word with complete sarcasm, as this is a show that’s just about making out and over-the-clothes groping) by the standards of The Bachelor franchise. Jade, you deserve better. Trust me.

Unless ABC makes a less sexually-stifled choice for the next Bachelorette, Jade won't be taking a journey for the right reasons, so who will be? I'm placing bets on the other remaining ladies:

Whitney is hella cute, blonde, and has one of those jobs that make you feel bad about what you’re doing with your life (she’s a fertility nurse, so she literally creates life every day). Her voice is a tad squeaky, but I’m sure that’s a quirk you could learn to love (or grow to maliciously hate). One caveat with her being on The Bachelorette? (Spoiler alert, Bachelor fans!) Bachelor gossip guru Reality Steve has Whitney going pretty far in this competition, and due to shooting schedules, you typically can’t come in first or second and still be on The Bachelorette — there’s no time. If she’s Chris’ winner or runner-up, it's almost impossible that Whitney could be the next Bachelorette.

If you’re listening to the rumors, Britt is definitely the front-runner for the Bachelorette position. She’s gorgeous, bubbly, vivacious, and a hell of a lot of fun (or so it seems). I’ve seen on message boards and comment sections that she seems manipulative: On Sunday's episode, she (as Chris Harrison puts it), “blows it” when she accuses of Chris, in front of the other girls, of not caring about her. This is where that whole scheduling thing comes into play. Is Britt throwing herself under the bus to leave early and be the Bachelorette? Or is she really upset and actually on the show for the all-important right reasons?

Who? I barely know who this woman is, and I’ve been watching since day one, so I'm going with a "no" on her Bachelorette chances. Sorry, Megan, but it's not happening. You seem like a nice-enough girl, but you've got to make a pretty big impression to get to hand out roses in a ball gown for 10 episodes.

Becca’s quest to find the right man to lose her virginity to (a la Sean Lowe's Bachelor season) could be a real gimmicky way to promote the next season. The Bachelorette: The Special Gift or The Bachelorette: Like A Virgin or The Bachelorette: On The Springs Of Love could make really great taglines for this season. Plus, she’s cute, sweet, and approachable. But, again, Chris really seems to like Becca (they connected so well on their last one-on-one that even I was smiling at the television), so she may not have time to be the Bachelorette. Also, all that stuff I said about The Bachelorette being weird about lady sex? That would apply here for the virgin thing.

Kaitlyn’s a wild card in this race. When you think that Britt or Carly has her beat, BAM, she’s back up in the lead. Kaitlyn is also beautiful, fun, and loves to camp (remember how excited she was on that date?). I just feel like we don’t know that much about her. We’ve been given much better backstories on some of the other women, so I’m not sure that the producers are giving Kaitlyn the same edit that they gave, say, Andi Dorfman or Desiree Hartsock. Sorry, Kaitlyn! You can come to my apartment and eat pizza whenever you want, though. You seem like a fun gal to have around.

Y’all, Carly is so cute. I wasn’t a believer in the beginning, but ever since she sang that song to Chris on the Big & Rich date, I am enamored by this chick. She’s funny, she’s spunky, she’s cute, and she’s a cruise ship singer. I personally don’t think Carly will make it past the hometown dates, so Carly might actually have a shot here. The Bachelorette: Love Cruise. Are you listening, ABC?

There are many women who could take the role on, but The Bachelorette is like Highlander: There can be only one. Watch closely during The Bachelor: Women Tell All — that’s where we usually can tell who will be the next woman in the hot seat. Stay tuned!