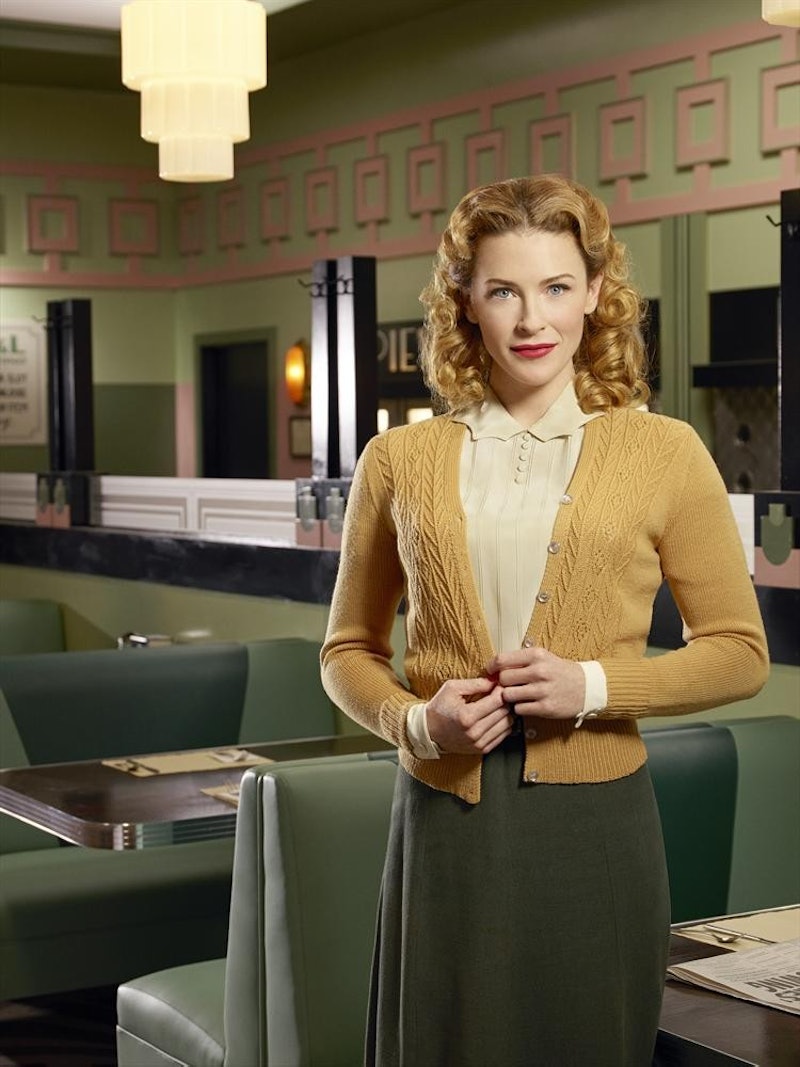 If you haven't been watching Agent Carter and Jane the Virgin, then you've been missing out. Not only have you missed fantastic storylines, drama, humor, action, and most importantly, feminism, portrayed throughout each show, but you've also been missing out on actress Bridget Regan, who plays Dottie on Agent Carter and Rose on Jane The Virgin. You might also recognize her for her time on White Collar, Beauty and the Beast, Sons of Anarchy, and Legend of the Seeker, where she made a name for herself. Well, Regan continues to do just that by being a hardcore badass on both Agent Carter and JTV.

Fans of the ABC and CW series know how big of an impact Regan's had on network television, especially on two of the most talked about shows of the season. On Agent Carter, Regan showed up as the sweet and innocent Dottie Underwood, who was said to be a ballet dancer from Iowa. However, it was revealed that Dottie is a product of the Black Widow Program, aka she's evil, kicks major ass, and is setting out to take down Agent Peggy Carter.

As for Jane the Virgin, Regan plays the beautiful, charismatic Rose. Viewers knew she wasn't completely innocent, seeing as she was having an affair with her husband's daughter. However, fans were definitely surprised when it was revealed that Rose is Sin Rostro, aka a big bad drug lord.

I think it's safe to say that Regan is an unstoppable TV villain. With that said, here are 11 reasons why Regan and her characters are total badasses.

She Can Play A Criminal Mastermind

Anyone who pulls off a criminal mastermind is a badass, amiright? Not to mention, as Rose, Regan portrays it off beautifully. First, she sucks us in with her charm, love for Luisa, and fear of Emilio, and then bam! She turns around, kills her husband, and it's revealed she is the Sin Rostro. Sorry, not sorry, for all those who assumed the drug lord would be a man.

I think this gif says it all. Regan frightens and inspires me all at once to take self defense classes so I can be an awesome fighter like Dottie.

Yes, Dottie's a trained assassin and Rose is a drug lord. With that said, Regan portrays two women living out their lives as they see fit and abiding by their own beliefs, even if it is does mean they're working towards evil goals.

She's A Leader, Not A Follower

Seeing as Rose runs her own criminal organization, I think it's safe to say she's following her own path and won't let anyone get in her way.

Some might see vulnerability as a weakness, but I think it makes someone more real and badass, which is exactly what Regan embodies as Rose, especially when it comes to her love for Luisa.

She Embraces Her Characters' Sexuality

Despite Rose hiding behind her true identity and as Emilio's wife, there's no doubt she loves Luisa. Regan's embraced Rose's sexuality on more than one occasion, and both Rose and Dottie ooze a certain sexiness that only adds to their lethal personas.

Regan plays women who are much more than a pretty face. There's also much more to Rose and Dottie than their evil agendas. They have strengths, weaknesses, passions, and intelligence, among many other qualities that prove Regan can pull off any type of role.

Regan is on the up and up. I have a feeling this isn't the last we've seen of Regan, and I can only hope we see even more of her as Dottie (*fingers crossed* she doesn't die) and Rose (here's hoping she doesn't go under the knife).

She Gets What She Wants

Dottie and Rose go after what they want, which makes me love them even more. Yes, I know they're villains, but they bring so much spunk to Agent Carter and Jane the Virgin. How can you not like that? Plus, I admire Regan, so I can't help but admire her characters.

There's not doubt that Rose is all about equal rights, especially when it comes to her drug business. Can you imagine if someone told her she couldn't run her business as she sees fit or that she'd make less money than a male drug lord? Yeah, she probably bury them with cement.