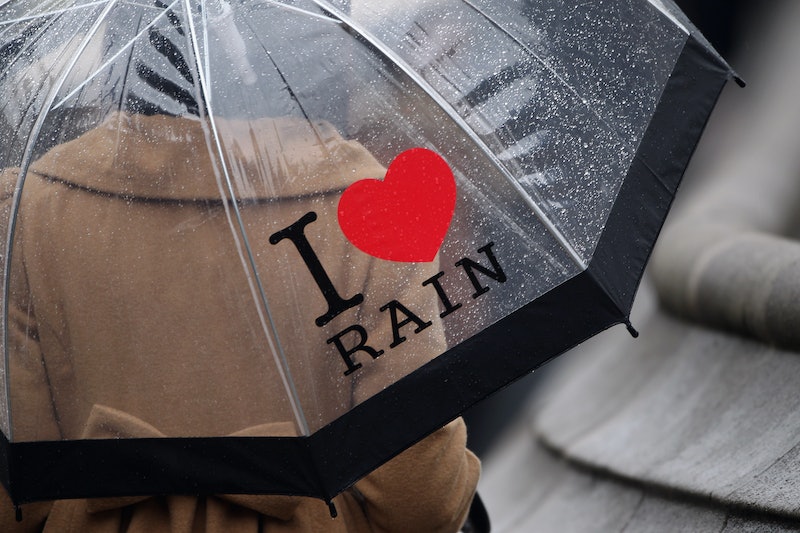 No need to ask Siri: it's definitely raining at the 2015 Oscars. Inclement weather has quite literally rained on the Academy Awards parade, which in this case, is the red carpet. While the red carpet is covered by a tent (as The Hollywood Reporter covered earlier, rain was in the forecast, so preparations were made ahead of time) and there's a veritable sea of umbrellas ensuring that the hair, makeup, and outfits of the rich and famous go unscathed, it's still made everything every so slightly less glamorous. (Even worse, the fans in the stands appear to be getting soaked throughout this storm. Who are they wearing, you ask? Mother Nature, that's who.)

Still, the stars are taking it all in stride and looking pretty damn fabulous in spite of the spotty weather. Some celebs have even taken to social media to talk about the rain-soaked event, because spoiler: rain isn't exactly a daily occurrence in sunny Southern California). Case in point: the lovable Chris Pratt and Anna Faris used the apropos hashtag #WetRedCarpet. Faris—who shared an adorable pic of her and her hubby in their limo on the way to the big event — even hilariously humble bragged, "On the way!! I shaved my legs!"

I've compiled some of the best tweets about the rain invading the 2015 Academy Awards red carpet from the stars, those reporting on the ground, and the fans.

There was some necessary sarcasm:

And some more sarcasm (it's just rain, after all):

A little earnestness (they're not used to all this water falling from the sky, OK?):

And one legitimate excuse to pout:

Hey, at least they're all headed inside for a three (plus?) hour ceremony, eh?

More like this
Remember When Benedict Cumberbatch Announced His Engagement In A Newspaper Ad?
By Hugh McIntyre
Jake Daniels Just Became The UK’s First Active Football Player To Come Out As Gay Since 1990
By Sam Ramsden
What Is Jeanie Buss' Net Worth? The Lakers President Is Uber Rich
By Hugh McIntyre
The Most Head-Turning Outfits At The 2022 Billboard Music Awards
By Avery Matera
Get Even More From Bustle — Sign Up For The Newsletter