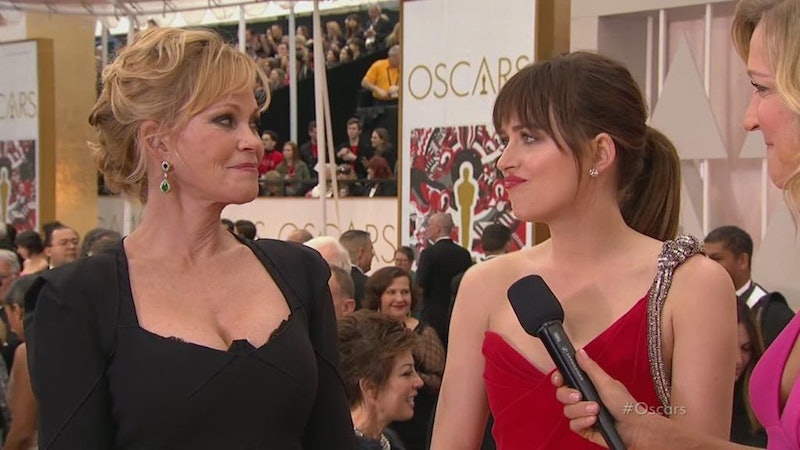 Alright, red carpet people. I understand that Fifty Shades of Grey is a nationwide phenomenon, and that Dakota Johnson is appearing on the Oscar red carpet and telecast as a presenter. But does that really mean that you should only ask her and her mother, the great Melanie Griffith, questions that are only geared toward Fifty Shades? First of all, there's no way either woman is going to answer your ridiculous questions. And come on, is it really that important to find out Griffith's deep thoughts about the film? No, it is not. You're just going to make everyone involved feel really uncomfortable. And that's exactly what happened on Sunday night at ABC's red carpet with interviewer Laura Spencer.

So instead of asking the obvious questions about sex and Fifty Shades of Grey, and whether or not Griffith has watched her daughter have sex onscreen (would you want to watch your own daughter have sex onscreen?), why not delve into Griffith's incredible film history and find out what she's passed on to her daughter? Why not ask her something funny and outside the box that would actually entertain the two women, instead of bore them or make then feel completely awkward at the biggest night for film? Here are some ideas of things to ask in the future.

You Could Take a Cue From Jimmy Kimmel

During Kimmel's interview with Laura Spencer on ABC he told her to ask better questions and she replied with: "What are you going to be for Halloween?" Or even better "How long do you think it would take to eat your car?" These would work better than these lame Fifty Shades questions.

If you want to actually ask a question with some substance that still relates to Fifty Shades of Grey (which again, why would you want to? The mystery behind the film is gone now that it's out, people!), why not ask Griffith what kind of advice or suggestions did she give or did Johnson ask for about being so vulnerable and "naked" onscreen?

Or how about talking to Griffith about what kind of films she wants to see her daughter take on now that she's guaranteed to be offered a wider range of film since she received some of the only great reviews for Fifty Shades?

You Could Ask Literally Anything Other Than What Was Asked

To be honest, I'd rather hear about literally anything else than creepy, awkward conversations about a movie that Melanie Griffith will probably never see and Dakota Johnson probably doesn't want her to see. These people are more than one film, especially an actress as accomplished as Griffith. Be more clever guys. It's literally your job.

More like this
Sandra Bullock, Girlboss Extraordinaire
By Matt Harkins & Viviana Olen
Laura Dern Said “Cultural Awareness” Made Her Rethink This 'Jurassic Park' Fact
By Grace Wehniainen
The 'Hocus Pocus' Sequel Finally Has A Release Date & It Makes Total Sense
By Shannon Barbour and Radhika Menon
Colin Firth Revealed His Favourite Mr. Darcy (& No, It's Not Himself)
By Sophie McEvoy
Get Even More From Bustle — Sign Up For The Newsletter