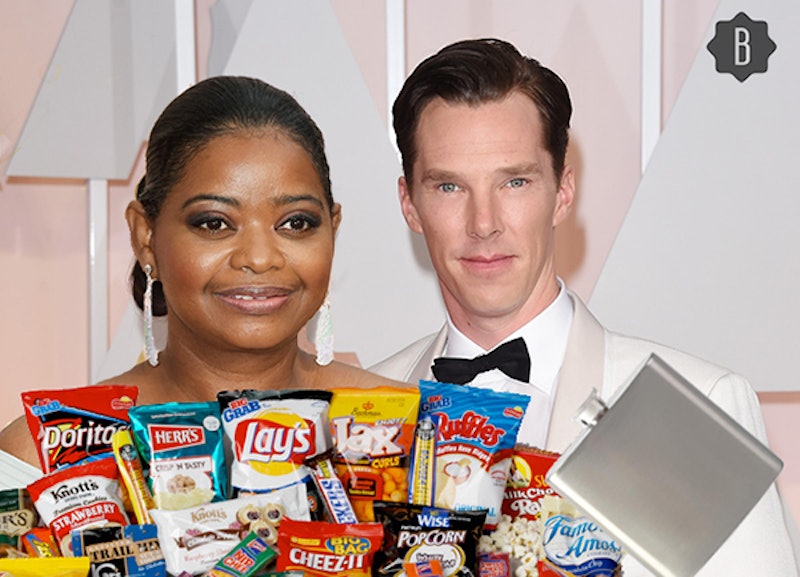 The Oscars might be the most prestigious award ceremony out there right now, but it's also, like, super long. I mean, from 8:30 p.m. to 11:30 p.m., you have to be parked in front of your television to find out which of your favorite celebrities are going to go home with a gold statue and which of your favorite celebrities are just going to go home. However, during the 2015 Oscars ceremony, two celebrities proved to the world that they know how to watch the Oscars right: Benedict Cumberbatch and Octavia Spencer. Why? Because Cumberbatch had a flask in his hand during Neil Patrick Harris' opening monologue, and Spencer had to be told not to take her eyes off Harris' Oscars predictions to just go and get herself some snacks. Basically, Cumberbatch and Spencer are all of us right now. They know how to watch the Oscars right.

Listen, it's not that we don't care about the Oscars. It's not. It's just that I have no idea how you're expected to get through the entire ceremony without snacks and a drink. I mean, that's why we have a 2015 Oscars Drinking Game, isn't it? To deny Spencer and Cumberbatch their booze and snacks is to deny all of us the most basic joy, which is why Cumberbatch and Spencer are probably now best friends. In between all these montages, presentations, and NPH jokes, they're passing that flask back and forth and sharing snacks so Spencer doesn't have to stop her watchful protection of NPH's Oscar predictions.

No one tells Spencer when she can and cannot have snacks. No one tells Cumberbatch when he can and cannot drink from a flash. And, in that moment, all of us learned an important lesson to take with us to every award ceremony: snacks and a flask are a must. Don't believe me? Check out the photo below, which is the most accurate photo we have of what's going on behind the scenes of the Oscars right now.