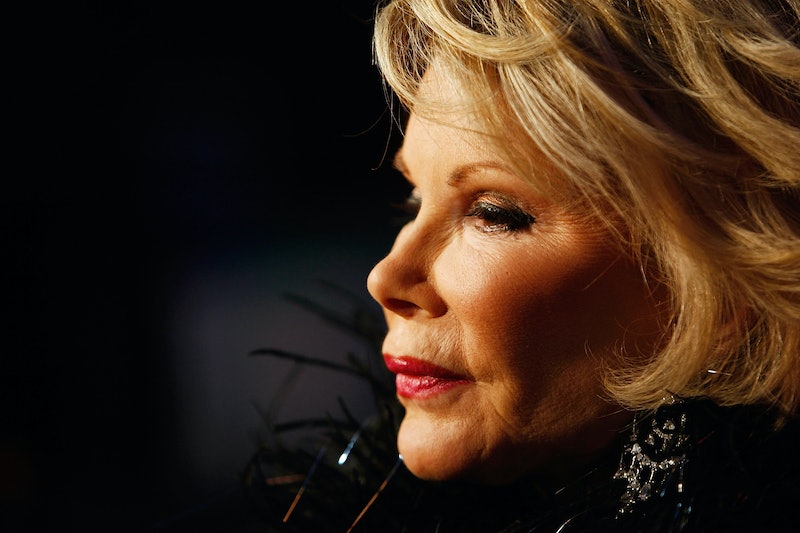 At one point, Joan Rivers and the Oscars were as synonymous as the Oscars and, well, the red carpet itself. Yet, despite the fact that the comedian was a red carpet staple on the awards circuit for years, Rivers was snubbed in the Oscars' In Memoriam segment. And no one is happy about it.

Now, every year there is one actor who fails to make the cut in the Kleenex-worthy segment — the Academy is unable to fit everyone who contributed to Academy greatness who passed in the past year in a video that runs just a few minutes long. That said, it seemed odd to many that Rivers — who died in September after a career than spanned over half a century — would not make the final cut, considering she provided her biting wit to the red carpet starting way back in 1996.

That said, Rivers did get her moment in the Oscars sun earlier in the evening. Rivers' daughter and red carpet and reality show partner-in-crime, Melissa Rivers, presented a video tribute to the only woman to ever host a late-night show during E!'s Academy Awards pre-show. And just a three days before the Oscars ceremony aired, Rivers posted a memory of her red carpet coverage alongside her mother:

Still, a pre-show tip of the hat certainly didn't seem like enough for many who came out in droves to protest Rivers' absence during the In Memoriam segment.

And Mashable even created its own slide for Rivers:

Exactly why, however, was Rivers left out? Though many are pointing possibly to the fact that Rivers might not have been a member of the Academy, others are shaking their heads in response — after all, as TVLine notes, Rivers appeared in quite a few films during her long career (hello A Piece of Work!) and even directed a feature, Rabbit Test. But even if she wasn't a member, fans of the late comedian are still insisting she should have been included in the tribute, even if Academy rules outline that those included in the segment need to be former Academy members. (UPDATE: The Academy itself just issued the following comment to Bustle: "Joan Rivers is among the many worthy artists and filmmakers we were unfortunately unable to feature in the In Memoriam segment of this year’s Oscar show. She is, however, included in our In Memoriam gallery on Oscar.com.")

Others, however, aren't quite as concerned:

So, yes, it's likely that Rivers would have loved the snub, and even turned it into material. So let's not sweat it, Rivers fans. Instead, just don't get us started on the fact that Elaine Stritch didn't make the cut either.