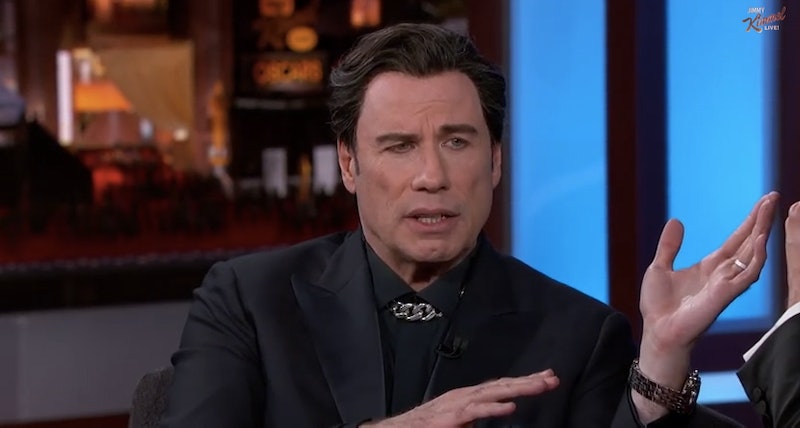 I don't think any of us will ever forget the moment at the 2014 Oscars when John Travolta so spectacularly flubbed Idina Menzel's name, calling her "Adele Dazeem", when he was supposed to be introducing her performance of "Let It Go" from Frozen. At least, I hope we won't forget it. Comedy that perfect doesn't come around every day. But, so far, it seems like we have nothing to worry about, as the slip-up is once again at the forefront of everyone's minds. Not only did Menzel appear onstage with Travolta at Sunday night's ceremony and good-naturedly rib him about the mistake, but Travolta also went on Jimmy Kimmel Live! to give a full explanation of exactly how that garbled mess could have come out of his mouth. Finally.

But, if we're being totally honest, what he actually gives is three explanations for the error, which has me giving him some serious "thou doth protest too much" side eye. In the span of less than two minutes, he manages to blame a page, an elevator, Goldie Hawn, and a teleprompter... as well as throwing some shade at Brian Williams. Quite the impressive feat. I guess he's had a lot of time to think, given that his only explanation previous to this one was super half-hearted. (It doesn't count as an apology if it has a Frozen pun in it, sorry buddy.)

Anyway. Travolta claims that the first thing that went wrong is that the page who was supposed to retrieve him from the audience got stuck in an elevator, so by the time someone realized and rushed Travolta backstage, he had less than two minutes to prepare, instead of the 15 he'd been promised. Then he ran into Hawn:

Now Goldie Hawn is charismatic, sexy, beautiful... and I was starstruck. I'm starstruck loving and hugging her up, and forgetting that I have to go and do this bit.

According to him, he was mid-conversation with Hawn when he was told he was on, and informed, essentially on his way to the stage, that producers had changed Menzel's name on the teleprompter to the phonetic spelling.

So I go out there, and I get to her thing and I go 'hmmm?' And in my mind I'm going 'what — what is that name? I don't know that name!' And it was just phonetic spelling, but I didn't rehearse it that way.

But you did rehearse it in general, right? You really only had one job at the Oscars last year, and it was to pronounce this human's name correctly. I mean, really, maybe you look that up in advance, yeah? Just a thought.

I don't know, man. I think the only thing I fully believe at this point is the whole "hugging and loving her up" part about Hawn, because, as Travolta showed last night, getting uncomfortably handsy at the Oscars is... kind of his thing.