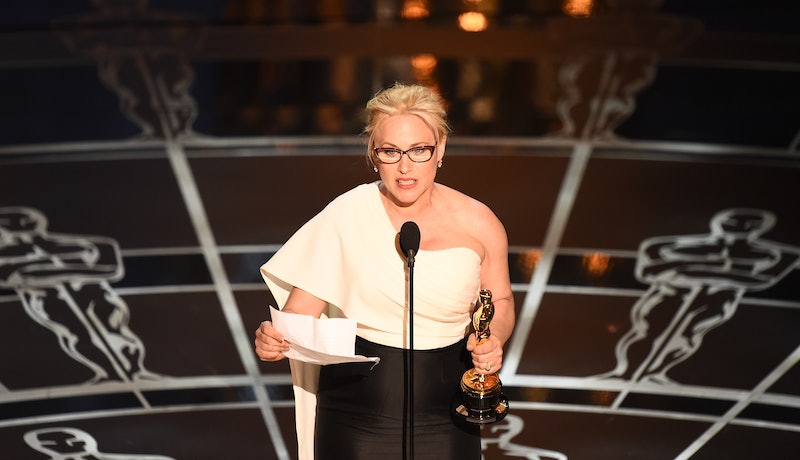 One of the highlights of the 2015 Oscars for me was Patricia Arquette's speech on equal pay for women. But, while her words rallied the women in the room (including a very passionate Meryl Streep), backstage she made some problematic comments that show her focus is mostly on white, cisgender women. In her original speech on stage, Arquette's feminist words were given huge applause:

To every woman who gave birth, to every taxpayer and citizen of this nation, we have fought for everybody else’s equal rights, it’s our time to have wage equality once and for all, and equal rights for women in the United States of America.

But when she elaborated backstage, things got a little hairy. "It's time for all the women in America, and all the men who love women, and all the gay people, and all the people of color that we’ve fought for, to fight for us now," she said to the pressroom.

I have three problems with that line of thinking. One is that it seems to suggest that we are unable to fight for more than one cause at a time. I think we can campaign for equality in gender, race, and sexual orientation all at the same time. In fact, we have to, because those issues aren't going away either, and they cannot be ignored.

But, more than that, as feminist activist Roxane Gay pointed out, it seems like Arquette is suggesting that only one movement can have the spotlight, and that the others have somehow had their turn. Never mind the fact that there are still many things that need to be resolved to achieve equality for the LGBT community and people of color.

Furthermore, many people pointed out that Arquette's suggestion that the LGBT community and people of color need to rally around her cause suggests she was really making her speech for white, cisgender women, and is asking everyone else to come together for them. It's a little bit disappointing to hear Arquette separate everyone into groups. The feminist movement needs to include everyone by nature. There shouldn't need to be a call to arms for the LGBT community and women of color to support the cause, because their voices should already be included in that cause in need of other support.

Plus, it's as if she's indicating that there haven't been such people standing up for wage equality before. I've seen all kinds of people — lesbians, trans women, black women, men, etc — stand up for feminism. But many are complaining that Arquette ignored all of this in favor of rallying minorities around white women.

It's so important to remember that this fight for equality isn't just a white woman's fight, and it isn't just a straight woman's fight. As The Independent pointed out, "In the United States and the UK alike, white women are likely to earn more than most minority ethnic groups." So it's a little ironic and upsetting that Arquette is saying that those who are most often marginalized need to get behind her fight for white, cis women.

Don't get me wrong. I really am glad that she opened a dialogue and brought attention to such an important issue during her speech. But, since it is a dialogue, we need to keep talking. Her words aren't the be-all, end-all of the movement and we need to keep an open line of communication about equality for all people, regardless of gender, race, or sexual orientation.

More like this
Remember When Benedict Cumberbatch Announced His Engagement In A Newspaper Ad?
By Hugh McIntyre
Tom Cruise Gives His Honest Review Of Lady Gaga’s New Song For 'Top Gun: Maverick'
By Hugh McIntyre
Jake Daniels Just Became The UK’s First Active Football Player To Come Out As Gay Since 1990
By Sam Ramsden
Simply Sayo Doesn’t Consider Kpoetry Hard Work
By Jessica Morgan
Get Even More From Bustle — Sign Up For The Newsletter