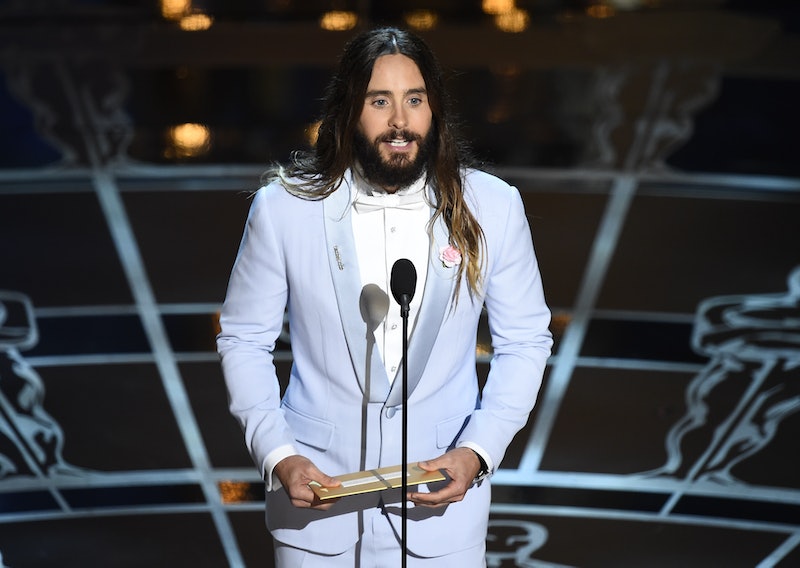 Sunday night may have been a night to honor the most talented creative minds in Hollywood, but an unexpected star emerged out of the midst of the 87th Academy Awards: the beard. The wide array of beard variety Sunday night was truly dazzling, showing us that each beard is unique in its own way and has a story to tell. Apparently our favorite Hollywood bros didn't get the memo that the beard is over, because the beard game last night was strong. (A little too strong for some. I'm looking at you, McConaughey.)

There were just so many Oscar beards to process that you might have missed some of them. It is my duty as a fellow beard enthusiast to do a round up of all the Oscar scruff for you so you can see for yourself. I have also gone to the trouble of ranking these men based on their beard game. It is important to note that I am not just judging on beard alone. For what is a great beard if it clashes with the face and outfit of the bearer of said beard? I have analyzed not only the strength of the beard (or alternate facial hair, see the selection of goatees), but also how well the beard complements the actor's overall wardrobe and aesthetic appeal.

So, without further ado, from best to worst, I give you: a definitive ranking of 2015 Oscar beards

If you have eyes and the mental capacity to comprehend such beauty, I don't even think this needs explaining. Just look with your special eyes at this bearded slice of perfection. Yum.

A strong performance by the Chrises tonight. Chris Evans was looking dapper with his full, well-groomed beard that perfectly accented his chic Oscars look.

Chris Pratt's beard was actually pretty meh, but he's here for the sake of continuity and solidarity with the other beard-sporting Chrises of the evening. Pratt could've done better (or at least started growing his beard more than a day in advance of the Oscars).

Questlove was sporting an epic full beard last night. When your head 'fro matches your face 'fro, and they both look that cool, you get high points in my book.

Though many people still somehow can't pronounce (or spell) his name properly, Chiwetel Ejiofor wowed with a good-looking set of facial hair.

The bald head + goatee combo is always a bit risky, but Common is clearly a big risk-taker and his gutsy move was well-played. His chic goatee was on point, and Common could teach Channing Tatum a thing or two about how to pull off a proper goatee.

Ben Affleck is no stranger to the beard world. He's been sporting this look for a while now, and he racks up some major points for consistency. Not to mention just an overall solid beard game.

Proving that he ages like fine wine, Seacrest showed up last night with this handsome manicured beard. Keep up the good work, Seacrest.

Idris Elba would be on this list even if he didn't have any facial hair, let's be real.

Jared Leto wins major points for his massive beard and for just totally confusing me with his look. Do I find myself repulsed by this or utterly beguiled? The whole thing is just so overwhelming that I don't even know if it's good or bad. But it is a beard, and it is impressive, so Jared Leto gets some mad props. Twitter did have some fun with this look though, with many making 'Fancy Jesus' jokes, and expressing a bewildered appreciation for Leto's getup.

Just an overwhelming 'meh' for Jason Reitman. Between the messy beard and the butt part, this is just not one of my favorite looks.

Mark Ruffalo is one of my favorites in the "hot guys who could also be my dad" age category. Normally I would give him points solely based off that, but his weird, patchy goatee leaves much to be desired.

Channing Tatum looks like he camped out before the Oscars in an unmarked white van, passing out candy necklaces to unsuspecting elementary schoolers. I'm sorry, but it's true. The goatee is preeeetty creepy and, again, Tatum needs to get some goatee tips from Common. Or he just needs to shave it off...

Kevin Hart's goatee was a nice try, but it looks like his goatee is trying to turn itself into one of those pointy beards with that little tuft at the bottom there. Definitely should have trimmed that sucker up; goatees are risky enough and it just gets even worse if you don't trim it real nice (especially for the most glamorous night of the year).

I can't help but poke a little more fun at John Travolta, whose crazy antics at the Oscars had us laughing all night long. I know this doesn't count as a beard, but Travolta's luscious wig deserves its moment to shine, too. That is one glorious and shiny rug (but apparently, still not glorious enough for ScarJo). I didn't even realize it was fake until I remembered that this is what he normally looks like now:

Joining the solid group of men with lackluster, barely-there beards, we have Matt McGorry, whose wannabe whiskers simply don't do him any favors.

Frida Kahlo, is that you? Alejandro G. Iñárritu should thank his lucky stars that his unibrow distracted everyone from his scruffy, two-toned, Guy Fieri-looking beard. It would not have won him any Oscars in the Best Beard category, that is for certain.

Oh, Peeta. That neck beard would surely have gotten you killed in the arena, if for no other reason than that it provokes pure horror in all who come across it. Seriously, this is bad. The subtext of that neck beard says: I have successfully made it all the way through puberty and this neck beard is proof of that. Hutcherson is like one step away from a trash 'stache or a soul patch.

Jack Black's beard speaks for itself. And what is has to say is not pretty.

And the Oscar for Worst Beard Goes To... Matthew McConaughey!

They say a picture's worth a thousand words and this picture clearly says: My name is Matthew McConaughey and I tunneled my way out of prison just in time to change into this tux and make it to the Oscars. I did not have time to shower, but I did rub my armpits down with some soap in the bathroom five minutes ago and doused myself in Axe Body Spray to mask the lingering stench of feet and stale urine that clings to my skin like a glove.

Seriously though, this beard is straight up bad and impressive in its own right for its utter badness.