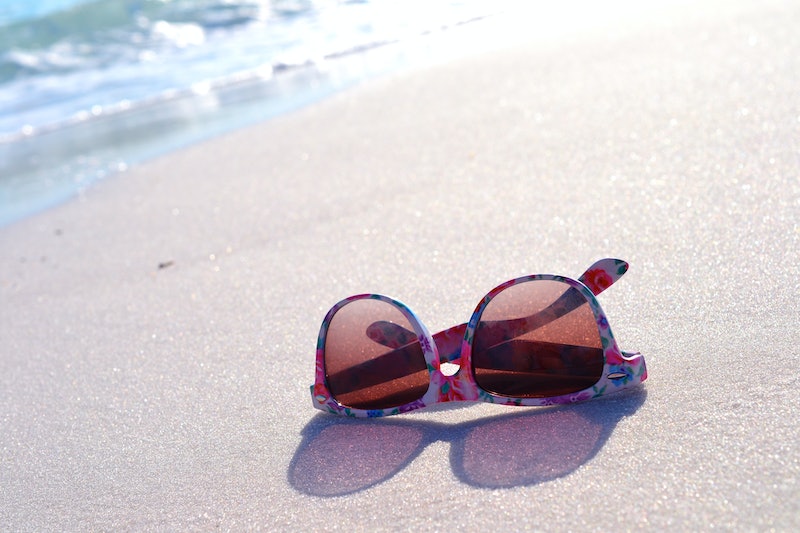 If you're in college, you're probably in the midst of prepping for your spring break plans — whether they involve a service trip abroad, a vacation to some place boasting "foam" that you can "party" in, or just staring at your dorm walls, unencumbered by annoying stuff like going to class or having contact with other human beings. But no matter what your plans, surely you've wondered — how is spring break even a thing? How and when did the world come together and decide that for one week in March or April, all college kids would have carte blanche to leave their town, head to somewhere tropical, and engage in kegstand contests at bars with names like The Horny Dolphin?

Well, the historical origins of spring break lie with those ancient masters of getting liquored up and taking of their pants in public, the Greeks. The ancient Greeks celebrated a spring festival called Anthestreria, which honored Dionysus, the god of theater, boning, and getting totally hammered. Festival goers dressed up, sang, and (no joke) engaged in wine chugging contests, presumably while an ancient Greek version of MTV's The Grind went on in the background.

So how did we come to have spring break as we know it today? Where did it begin? And should you be getting some kind of ancient Greek history class credit for drinking a margarita in the street at Daytona Beach? Read on, and find out how you are part of a proud historical tradition of getting sand stuck in your most uncomfortable bodily crevices.

College students have almost always had time off from school in the early spring, though for a long time, students just headed home to celebrate Easter with their families and, in many cases, work at family farms and businesses. Some students traveled, but typically they headed somewhere abroad.

But in 1936, the Colgate University swimming team decided to spend their spring break training far away from their near-frozen campus in upstate New York, in the infinitely warmer town of Fort Lauderdale, Florida. The break turned into an annual excursion ... and the swimmers started bringing their non-swimming friends, who were presumably way happier to be spending a week in Florida than heading back home to spend a week operating the thresher.

By 1938, the town had embraced the travelers, hosting an event called the College Coaches' Swim Forum at the Casino Pool, which brought over 300 swimmers and friends to the beachside area.

During World War II, Fort Lauderdale became home to a new crop of partiers — wealthy Ivy Leaguers who traditionally partied in the Caribbean, but who had been scared off my rumors of German submarine activity in the area's bodies of water. So they headed to Florida so that they could enjoy the one body of water that was guaranteed to be free of German war ships — enormous glasses of crappy beer.

Fort Lauderdale gained so much heat as a spring break party destination during the '50s that the media began to report on it. Most notably, in 1958, a Michigan State University English professor with the extremely un-partyish name of Glendon Swarthout decided to follow some of his students down to Florida, and find out about this new set of teen mating rituals he had heard were taking place at the beach.

Observing the 20,000 college students who had descended upon the area for the vacation, Swarthout dashed off a novel about what he saw down there, sensationally titled Where The Boys Are — a story in which four female college students travel to Florida for spring break, try to meet boys, and are eventually punished severely for it because, despite all its supposedly loose and lascivious morals, spring break culture was still as resolutely sexist as the culture at large. Party time, excellent?

Where The Boys Are was an instant hit when it was released in 1960, and the film version, also released in 1960, alerted America at large to the once-niche phenomenon of spring break. It was kind of the original Spring Breakers, except with granny panties, surfing, and sexism instead of guns, Britney Spears covers, and contemporary sexism.

In the year following the release of the film, 50,000 students showed up for spring break in Fort Lauderdale, making it the epicenter of collegiate spring partying. Spring break exploitation films also became a part of the culture, with even Elvis getting into the act in 1965's Girl Happy (a film which suggested that spring break might be a place to meet and bone Elvis, instead of just a place to get beer poured down your bra).

The spring break phenomenon grew in the '70s, spreading out to cities beyond Florida — and taking the changing sexual mores of the decade and reinterpreting them for a teen audience who has been pounding brewskis in the hot sun all day. Spring break's reputation as a place for sleazy debauchery grew in the '70s, hitting a fever pitch in 1975 when the the wet t-shirt contest was invented at Pierre's Restaurant in Metairie, Louisiana, and soon became an unfortunate spring break staple.

Spring break only grew as the '70s turned into the '80s, with 370,000 students converging on Fort Lauderdale in 1985. Spring break also continued to grow as a pop culture phenomenon, with a huge rash of spring break-themed movies popping up throughout the '80s, like the 1983 Tom Cruise vehicle Losin' It , a 1984 remake of Where The Boys Are , and the 1987 sequel Revenge of the Nerds II: Nerds in Paradise , a nuanced film about a college woman's sexual awakening in a beachside paradise (JK it is sexist garbage about panty raids and beer).

The first MTV Spring Break aired in 1986, broadcast from Daytona Beach, Florida. The program featured performers like Mr. Mister, a pre-socially conscious Beastie Boys, and those weirdly high-cut '80s bikini bottoms. MTV became a major force of spring break culture, bringing the idea that spring break was a lawless zone where nothing counted and everything was permitted into millions of homes across the country. That vibe perhaps reached its peak with this creepy home invasion-themed spring break contest that the channel ran in 1987, again with the help of the Beastie Boys. God, I'm really glad those guys decided that being into spirituality was cooler than being a pile of human trash, you know?

By the end of the '80s, the citizens of Fort Lauderdale were fed up with their annual influx of vomit-prone visitors, and began enacting ordinances against spring breakers, banning open containers of booze and putting up a wall separating the beach from the street. Things got so bad that the mayor of Fort Lauderdale appeared on Good Morning America , urging spring breakers to take their thongs, nude bosoms, and Jell-O shots elsewhere. Students responded by spreading out to other locations, including Panama City Beach in Florida, South Padre Island in Texas, and Cancun in Mexico — a city which was wrecked in a 1988 hurricane and rebuilt specifically as a party destination.

Did you think that by the '90s, every possible avenue of spring break exploitation had to have been already explored, that every gross spring break rock must have been overturned by then? Well, you're wrong, because it took until 1997 for American spring break to reach its absolute nadir: Girls Gone Wild .

But lest you think spring break in the '90s contained only the infinite sadness of Girls Gone Wild, fear not: we also had MTV's The Grind on the beach, the amazing spring break scene in She's All That, and also one time Thom Yorke from Radiohead jumped into the pool at the 1994 MTV Spring Break house. I know, bizarre, right? He should go have lunch with the Beastie Boys and reflect on how weird life is. I guess this is growing up.

2000s: Everyone Continues To Go Wild

The economic recession of the mid-aughts took some of the steam out of spring break's sails — in 2009, spring break trips to the Caribbean had dipped to 20 percent below their usual levels. But at least we got some classic spring break cinema out of the era, like "reality film" The Real Cancun, and From Justin to Kelly , a classic spring break tale of "American Idol winner meets American Idol runner up, and they keep trying to date even though they really clearly have zero chemistry." I mean, who can't relate to that?

Which brings us to today — an era when 40 percent of college students travel for spring break, spending almost $1 billion on trips to to spring break hot spots in Florida and Texas alone. In fact, 500,000 partiers spend over $140 million just going to Panama City, Florida, the "spring break capital of the world," each year — a city that also had to build a special "beach jail" for spring breakers who run afoul of the law. It is described as like "two dog kennels," and easy to hose down. So, there's that.

So if you're heading out to party on spring break, have fun, be safe, and only take your boobs out if you really want to. And if you're staying home, don't be bummed out — if nothing else, you have a guarantee that you won't end up engaging in the timeless spring break tradition of getting arrested while covered in your own barf, which is way less cool than they made it seem in Spring Breakers. For reals.

More like this
25 Quotes About Love To Share During Pride Month 2022
By Madeleine Aggeler and Emma Garza
How To See The Lunar Eclipse On May 15-16, 2022
By Kaitlyn Wylde
Meet The Disney Imagineer Bringing 'Guardians Of The Galaxy' To Epcot
By Charlie Mock
Photos Of Boris Johnson Drinking At A Downing Street Lockdown Party Have Surfaced
By Bustle UK
Get Even More From Bustle — Sign Up For The Newsletter