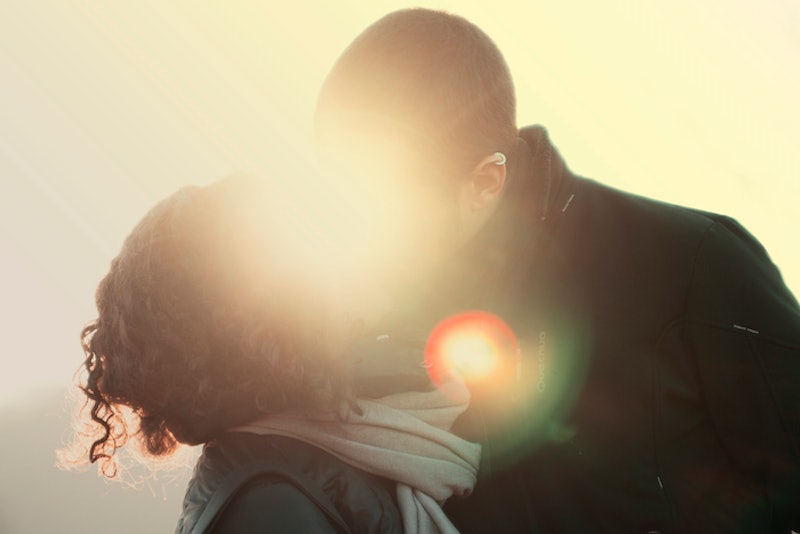 Despite the fact that they're out of the game for now, I still talk about dating with my boo'd up friends. Often, they bring it up and, as far as I can tell, they do this for two reasons: We are friends and friends ask about each others' lives (that's fairly standard), and also, to them, the lives of their single friends is wrapped in pure comedic mystery. Even though most of my friends have been in committed relationships for a few years, and that isn't very long in the grand scope of life, a lot has changed in the world of dating since then. For example, many of my taken friends seem to regard Tinder in the same way lots of us consider leather pants or hard drugs: exciting, mysterious, scary, and something that normal, sane, rational people will probably never experience firsthand. Those of us still drifting out here in Single World know that Tinder is, like, fully not a big deal anymore.

What I'm saying is: Dating has evolved (or devolved; not sure) in a way that's nullified any previously embraced hard rules about how it works or now one "should" act within it. Like that five dates criteria before adding a notch to the proverbial bedpost? Naw, man. That's so last century. By now, I have to hope that we're all onboard with the idea that there is no One True Rule about when is the "right" time to have sex with a new person. The only rule is: Do it when you're comfortable doing it. When you WANT to. When the other person wants to also. That's it. No, seriously, that. is. it.

What it takes before you feel comfortable adding a new person to your List must be evaluated on a case-by-case basis. Because here's the thing: When deciding whether or not you should smash sex organs with another person, you have to remember that you are talking about a person and each person is a special snowflake and so is the situation surrounding them and what you decide you want from your relationship with them. Sorry, I know it's annoying to think and weigh options and all, but that's truly the best practice in this and many life scenarios. Here's why you need to abandon the practice of upholding a set-in-stone set of rules when it comes to deciding when to have sex with someone for the first time:

It's a little dehumanizing to the people you sleep with

Judging someone based on some point system that allows you to measure, time, and quantify their bone-ability gives you way too much room to forget to look at them like the three-dimensional person they are. It dismisses their personality, efforts, spirit, and overall humanity. Carefully monitoring how many dates you've been on, or if they've said/done all the things on a checklist totally ignores the important things, like the way they do or don't make your insides flutter when they text a dumb gif. People are multi-faceted and to develop a way to reduce them is kinda lame—would you be down for someone doing that to you? It sounds weird because it is.

You are always changing, so the rules from when you were younger will probably stop being relevant at some point

It seems unlikely that the set of sex criteria you concocted when you first became sexually active will remain relevant as you get older. Let's say you started having sex when you were 16. Now imagine if you had to stay true to everything else you thought was smart when you were 16...forever. For me, at least, that would mean an energy drink and pack of Hawaiian bread was still a valid lunch option. Also, I'd continue to rock a pyramid belt and smoke clove cigarettes. What made sense even a few years ago will almost certainly no longer feel like the best fit for who you are now and more than just OK, that's normal and healthy. And it's called growth. Congrats. Don't let yourself get stuck in outdated rules about how you want to conduct yourself sexually.

Time isn't an accurate measurement of your connection to someone

If emotional intimacy must exist in order for you to want to get naked with someone, that's totally cool. When I say "you shouldn't have hard set rules for when to have sex with someone", I am in NO way implying that you should drop your standards for what makes you feel comfortable and excited about it. If you don't get turned on by sex with someone you hardly know, then definitely don't have sex with people like that. If you need an emotional connection before you are down to clown, then for sure, wait until that connection is there. However, that kind of closeness doesn't immediately trigger after X amount of dates or text exchanges. Sometimes it's instant! Or it takes its sweet time to unfold, maybe even over the course of months.

Basically, a connection happens when it happens if it happens. You just have to decide how important that is to you in a sexual partner, and then watch the relationship—not the calendar—to gauge when the time is right.

Weird, right?! It's like food: Different instances of eating can be totally different. Sometimes we get to hunker down beneath flattering lighting in a cushy bench seat and enjoy unbelievably decadent truffle-infused gnocchi with a luxurious bottle of Malbec. And then, other times, you're leaning over the kitchen sink, shoveling a can of tuna and washing it down with a Corona your friend left in the fridge two months ago. In both scenarios, you get fed. In a way, with both eating and sexing, it's just scratching different kinds of itches. Sometimes our bodies and hearts crave an intense emotional connection and tenderness. Other times, our bodies and hearts crave an orgasm. Plain and simple. Ain't no shame in looking to scratch either type.

Conventional sex rules were not made up by you, so why let them rule your life?

Numbers and equations and math and all that stuff meant to determine decisions you make about your body be damned. Use your inherent sense of logic and that awesome emotional compass, bb. Here's the only criteria you need to meet when deciding whether or not to sleep with someone new: Do you want to? Do they want to? If the answer to both is "yes", go forth, be safe, and do that thang.