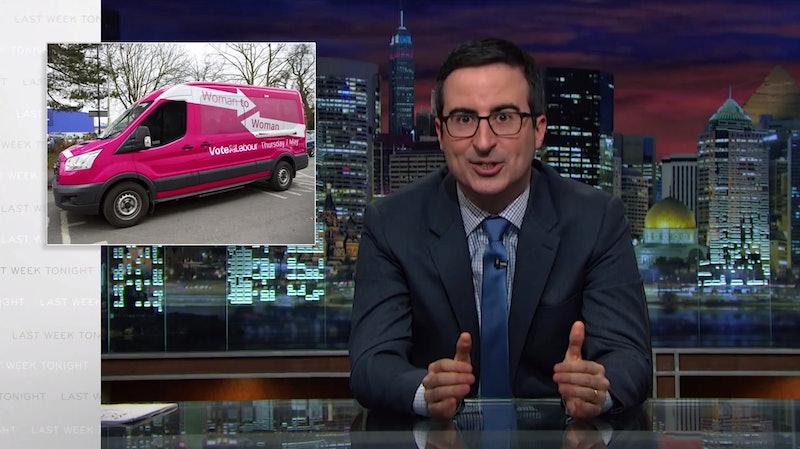 While most of the country was watching the 87th Academy Awards on Sunday night, America's favorite non-American watchdog was serving up his signature brand of witticisms and criticisms. This week on Last Week Tonight, John Oliver slammed the U.K. Labour Party for its utterly absurd and pretty sexist strategy in courting more female voters ahead of the country's general parliamentary election in May. Apparently, to the Labour Party, their desired female demographic of voters is made up of 8-year-olds who will base their votes on the color of the party's campaign visuals.

One look at said campaign visuals and you'll see why Oliver throws the Labour Party, ahem, under the bus. If you missed his hilarious rant because you were watching Patricia Arquette's own rant against sexism, not to worry — we're recapping John Oliver's wisdom here for you.

Oliver opens the segment reminding viewers of the U.K.'s general election in May. Naturally both parties are naturally campaigning hard for more female voters. And while the Conservative Party has been known to ignore women in the past, the Labour Party has been accused of something possibly worse.

Oliver then shows news clips of the Labour Party's wooing strategy: a hot-pink minibus painted with the party's slogan "Woman to Woman." According to the anchor, the vehicle has already been dubbed the "Barbie Bus" in the U.K., and Oliver hasn't even opened his mouth yet.

Wow. It is a little insulting that you're trying to appeal to adult women voters the same way that Mattel attempts to appeal to 8-year-olds.

And at least Barbie's pink bus had the good sense to unfold into a sweet hot-tub-and-party-den combo — that thing was sick.

It comes as no surprise that many women in Britain are not responding well to the pink Labour bus. One citizen told reporters when interviewed that the bus was "a bit patronizing."

A bit patronizing? The only way it could be more patronizing is if its wheels were giant NuvaRings and they refused to let women drive it.

The best part of the controversy? Instead of admitting that their decision was perhaps a bit (or a lot) misguided, the Labour Party instead simply denied the color of the bus. They tried to insist that it was "cerise" or "magenta." Otherwise, they just avoided the question altogether.

In a clip showing a reporter asking Labour Party MP Gloria De Piero what color the bus is, she fumbles with her words before settling on, "It's a version of pink."

I think she may have just hit rock bottom. You can see her thinking, "I got into politics to make a difference and now I'm on television desperately trying to act like I don't know the color pink. What happened to my life?"

But that's not all. The Labour Party dug themselves further into a hole in another attempt to defend the pink bus by saying that they wanted to "have a conversation about the kitchen table, and around the kitchen table" instead of having an "economy that just reaches the boardroom table."

Yeah, you know women. They want to talk to you where you are, not in a boardroom, but in a kitchen, or in a Baby Gap, or under a giant pile of yarn and romance novels.

At this point, Oliver says, he's almost glad the Labour Party hasn't attempted to ditch the pink bus and do damage control. Because it could look something like this mock ad that Oliver and his team put together (which isn't completely far off from the Labour Party's real campaign):

Women of the United Kingdom: The Labour Party would like to apologize to you for our wrong-headed pink van campaign. We want you to know that Labour respects you, which is why this general election we will focus on the issues that we know matter to you. And that means... ponies!

Look at the pretty pony!

And before you get offended, you're right — a pony is not enough. That's why we dressed the pony up in a pretty princess outfit!

Vote for the Labour Party in May and if you're very good we will come to your kitchen and you can pet the pretty princess pony.

Labour cares about women's issues — all of them.