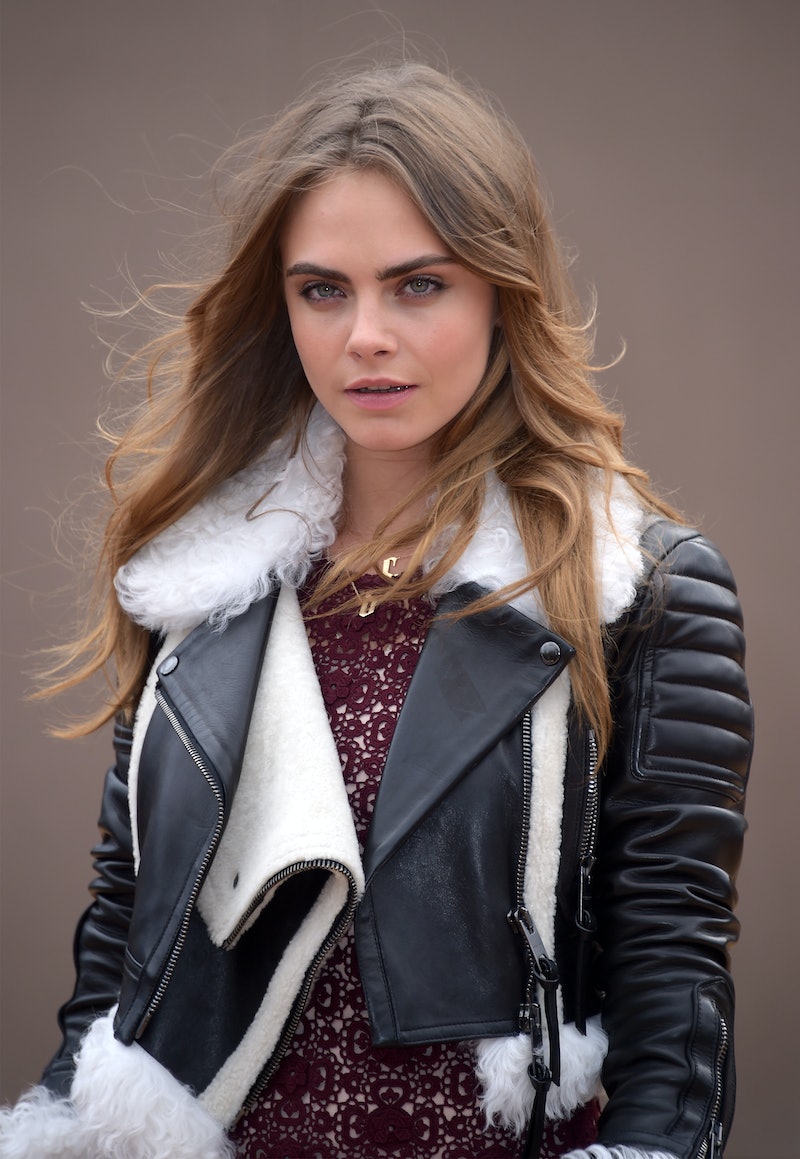 OK, so Cara Delevingne was at Burberry Prorsum, just not walking the runway the way I was hoping she would. Instead, she looked pretty darn fabulous in the front row (where she was sandwiched between Sam Smith and Jourdan Dunn — with Kate Moss, Mario Testino and Naomi Campbell sitting mere feet away, by the way). She came to the show early (unlike Naomi) and posed fabulously in — what else? — Burberry looks from the latest line.

Delevingne's always had some seriously covetable style (remember when she showed us how to do a night on the town right in a fringed mini dress, black tights, crazy-high platforms, and a trendy blazer?) — and she's managed to do it again for the Burberry show. Armed with a super-trendy shearling jacket, a burgundy lacy (very) mini dress, and some patchwork suede thigh-high boots, she was seriously dressed to kill.

And guess what? Even though all the pieces put together cost more than my car, it's not too difficult to steal her look — or, at least an approximation of it. After all, it's a relatively simple outfit (with some statement pieces, of course) so it's very wearable — whether you're headed to the Burberry front row or not! Let's take a look:

And a long shot, for the shoes:

Okay, so how to get the look? Let's break it down:

First, you're going to want to start off with a slightly boho, oxblood lace dress. This one's more of a skater silhouette than the bodycon shift Cara's sporting, but it'll work quite well for the look (besides, her friend Taylor Swift's a major fan of this brand, so it's kind of a win-win if you're into celeb fashion).

Up the unexpected cool factor another notch by adding a shearling jacket (preferably one with moto jacket-style detailing) on top of your lace dress.

Turns out, patchwork suede over-the-knee boots are quite hard to find... but these non-patchwork boots should do the trick. After all, they have that badass, superhero vibe (and newly-minted Suicide Squad villain Cara should approve of that).

Here's hoping for more awesome Cara Delevingne outfits before we see the end of London, Paris, and Milan fashion weeks!