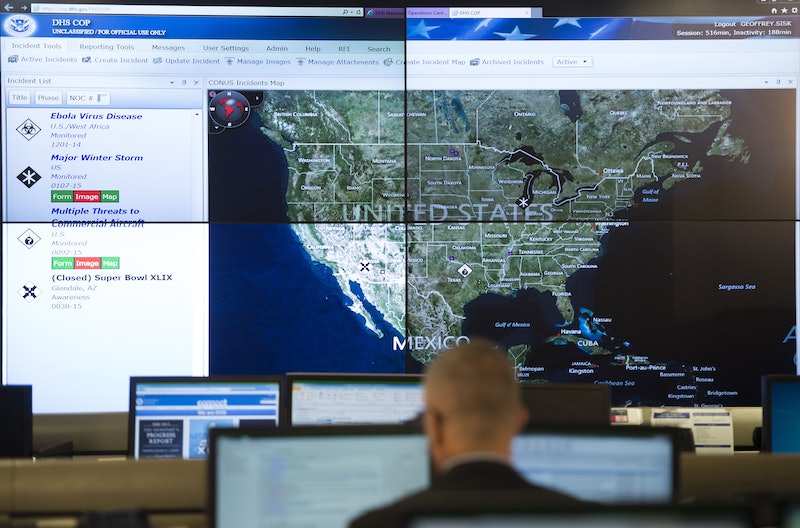 Politically, 2015 is already shaping up to be full of fun surprises. After the federal government shutdown happened last year, you might have thought that the madness would be over. Nothing on that level could possibly happen again, could it? Yes, it can, and it probably will. As only days remain until the agency runs out of funding on Friday, Homeland Security will likely shut down.

You might be bewildered by this information. After all, this year has seen a number of terrorism threats from different sources — including, but not limited to, ISIS, al Shabaab, and associates — in under two months. Why would Homeland Security shut down now, in a move that President Obama warns would damage the national economy and security? What reason could Congress possibly have for initiating another "worst-case situation"?

According to The New York Times, this is yet another political spat between a heavily divided Congress. House Speaker John Boehner has hinted that he is willing to let funding for Homeland Security lapse if the Senate continues to refuse to pass the House's spending bill. Boehner's attitude is one of classic Republican anti-immigration sentiment — the spending bill he wants passed would fund Homeland Security, but it would also kill Obama's legal protections for five million undocumented immigrants, including kids.

The Senate is locked in a stalemate because Democrats don't want to pass the funding bill if it's going to remove the provisions helping undocumented immigrants. Besides disallowing federal funds from going towards Obama's executive orders to protect those immigrants, the bill would axe a current Obama program, Deferred Action for Childhood Arrivals (DACA). DACA gives undocumented immigrants who came to the United States as children temporary legal status and working papers.

If Congress can't reach an agreement by the Friday deadline, a whole lot of people from the Department of Homeland Security are going to get furloughed — meaning they would be placed on leave without pay. How many people are we talking about? According to Obama, about 200,000 people will be left without paychecks if the funding bill doesn't pass.

The President has warned governors that if this bill doesn't pass and all those workers are furloughed, states will see negative impacts on their economies. Here's what he told the National Governors Association on Monday:

Republicans are blaming Obama, as well as Democrats in the Senate, for blocking the bill as America faces the rapidly expanding growth of ISIS in the Middle East. Homeland Security Secretary Jeh Johnson told CNN that the presence of terror threats is precisely the reason why the Department needs to not shut down right now — they need a steady budget. "It's absurd that we're even having this conversation about Congress's inability to fund Homeland Security in these challenging times," Johnson said.

It's important to keep in mind that Obama wants to fund Homeland Security as much as anybody else — it's one of the top priorities he outlines in his proposed budget for 2016. This budget deadlock is a tough call for the Senate because they have to weigh two motivations against one another. Do they want to stand their ground (no pun intended) on immigration, or will they compromise with the House so that the Department of Homeland Security doesn't have to shut down? I guess we'll see.