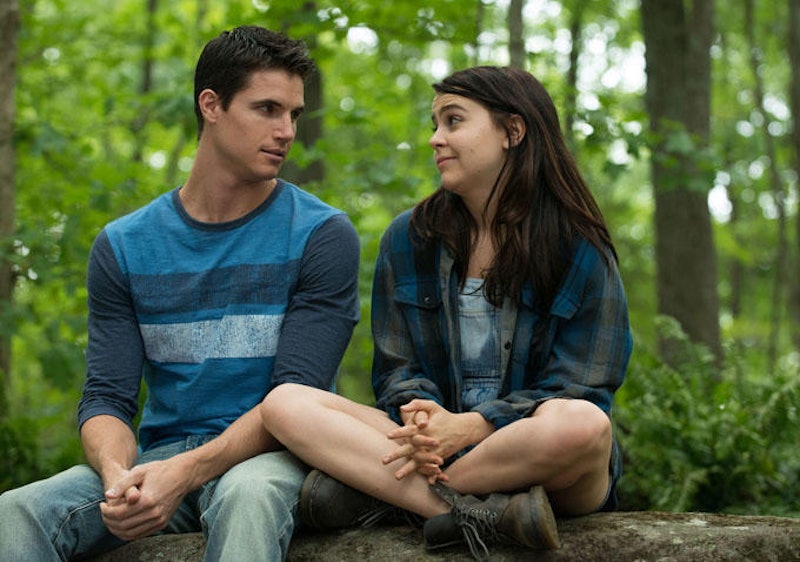 I knew I'd be seeing new teen comedy The Duff from the second I found out it existed. This was entirely due to my enduring belief that Mae Whitman is an actress who can blend together comedy and heart in a way that feels effortless and grounded — if she's starring in something, chances are I can't wait to see it. But still, I had my doubts. I've been devoted to teen comedies since long before I myself was a teen, but the concept of Whitman playing a "Designated Ugly Fat Friend" just seemed so inescapably preposterous. But, seeing the actual movie on its opening day in theaters, The DUFF surprised me. This is a movie that is very obviously the successor to the teen fare of the turn of the century: Movies like She's All That and Drive Me Crazy, which highlighted teen social strata partially by centering their premise around a makeover sequence and people with two very different personalities falling for each other.

(*In case you haven't seen Mae Whitman, she is gorgeous and pint-sized, and it's cringe-worthy to imagine her as part of a friend group that doesn't appreciate her particular brand of greatness.)

The DUFF, like many teen flicks, is constructed out of the parts of its predecessors. The unflinchingly cruel popular girl (usually homecoming queen unless that makeover works and the unpopular girl wins); the romantic duplicity; an unpopular person and a popular person falling for each other; the trumping of the aforementioned social strata. It's all present and accounted for in The DUFF.

This movie is, in its very bones, a retread — and yet somehow it doesn't feel as tired as instinct told me it would. I didn't spend my time in the theater feeling offended on behalf of Mae Whitman; I felt charmed by her and Robbie Amell alike. And most of all, I didn't spend time wishing I were rewatching She's All That instead.

Because The DUFF may be heavily built on tropes from films that carry their share of nostalgia — but it also beats them, at least when it comes to charm and watchability. The DUFF proves that we don't necessarily need the nostalgia of hindsight to revel in teen fare in our theaters — classic teen movies can happen here and now, and they are.

In the interest of, uh, science, let's dissect how some of those aforementioned topes manifest in three classic examples of this subsect of films marketed to teens.

Spoilers for each of these movies, of course.

The Makeover: Central to everything. After getting dumped by his popular girlfriend, cocky jock Zack (Prinze Jr. in his peak era) enters into a bet with fellow cocky job Dean (Paul Walker) that Zack can make any girl prom queen. Dean chooses art geek Laney Boggs (peak Rachel Leigh Cook). He starts hanging out with her, and she gives in to a makeover at the hands of a young Anna Paquin. The makeover mainly involves taking away her glasses, cutting her hair, and putting makeup on her.

The Central Relationship & Conflict Between Makeover-er & Makeovee: He's popular, she's invisible and weird. They fall for each other throughout the makeover process, and the conflict comes in when she finds out this all started with that bet. There's also a sad subplot about her mom being dead.

Signs Of the Times: Usher is there. One of the characters is a star of The Real World. And there is a choreographed dance routine at prom.

The Makeover: When he gets dumped by Ali Larter and her date to a dance falls in love at first sight with some rando, Hart's Nicole convinces Grenier's Chase to pretend to be a couple to save face and get back at his ex. This involves making things "believable," which involves prep-ing up Chase.

The Central Relationship & Conflict Between Makeover-er & Makeovee: She's popular; he's a rebel. They were best friends growing up until she ditched him when his mom got cancer (harsh). They fall for each other when their fake relationship turns into — wait for it — something more. There's also a subplot about her absentee dad and the movie ends rather weirdly with their parents announcing they're moving in together so it's likely they end up...step-siblings.

Signs Of the Times: They have a centennial dance for the new millennium. The popular kids listen to Celine Dion and Brandy. And there's an accompanying Britney Spears music video.

The Makeover: Initiated by Whitman's Bianca after Amell's Wesley informs her that she's what's considered a "DUFF." Bianca reacts appropriately (horror, hostility, some mild violence), but the concept starts infiltrating her interactions with her friends and the guy she's crushing on. She asks Wesley to make her over into a not-DUFF in exchange for making sure he passes science. The makeover itself mainly consists of two minutes of getting her a bra that gives her less uniboob, and then five minutes of one of the most charming dressing room montages I've seen in a long time.

Note: One crucial step to enjoying The DUFF is to stop taking the term literally around the time that Bianca does. From thereon out it's kind of a catch-all for imperfection and insecurity. It should also be noted that, re: The makeover, nothing much about Bianca's personal style changes save her bra and a baller plaid dress at the end.

The Central Relationship & Conflict Between Makeover-er & Makeovee: He's a popular and promiscuous jock, she's the awkward best friend of two more popular girls. They grew up next door to each other and used to take baths together as toddlers, but when we first meet up with them Bianca finds Wesley endlessly annoying. But Wesley — played by Robbie Amell, who, if his charm in this movie is any indication, is going places — can talk to pretty much anyone, so she asks him to train her to be the same. They bond, he overcomes his jock-y prejudices, she learns to accept herself, they become good friends and fall for each other.

How The DUFF Beats Other Makeover Movies

The DUFF is hardly Mean Girls, which is incapable of being dethroned as the title of best modern teen flick — at least for a while longer, and in part because Mean Girls felt subversive in a way that a lot of teen movies grasp for but few actually reach. But The Duff has something surprisingly few movies have, teen fare or otherwise: Two leads whose chemistry sparks the whole thing to life. Whitman's charm carries this thing, in much the same vein that Emma Stone did with Easy A. Amell, too: Freddie Prinze Jr. eat your heart out, I haven't felt so compelled by watching two people bond in a teen movie since Julia Stiles and Heath Ledger in 10 Things I Hate About You.

The movie itself follows pretty closely with the history of its fellow teen flicks, but it beats out the makeover movies of 1999 based on that charm and the fact that this is ultimately a movie not about a teen girl being dragged along by the norms of her peers, but about watching her discover how to make herself more comfortable as herself in the world. And it's about finding people who love you for being you. As Todd VanDerWerff writes for Vox:

The film's arc isn't the familiar one of the awkward teenage girl discovering her inner pretty self, so the boys notice what a fox she is. Instead, it's about Bianca evolving from her slightly awkward, closed-off self to the person she'll probably be after a few years in her 20s, when she has a better idea of who she is and what works for her. The resolution of the film revolves not around conformity, but around something more like embracing one's true self. Or, to put this entirely in terms of Mae Whitman characters, it's about Bianca evolving from wallflower Ann "Her?" Veal on Arrested Development into the warm, funny, super-cool Amber Holt from Parenthood.

It's not a perfectly executed message, but the fact that it allows for any nuance at all puts it above many teen comedies.

The Duff is a new teen classic, precisely because it works within the structure of the teen movies that came before itandbecause of the ways it uses that structure to highlight the talents of Whitman and Amell. I have a feeling we'll be seeing a lot more from both of them.

More subversive teen comedies will (and should) come along, but in the meantime I'm good with a retread that left me so utterly charmed.