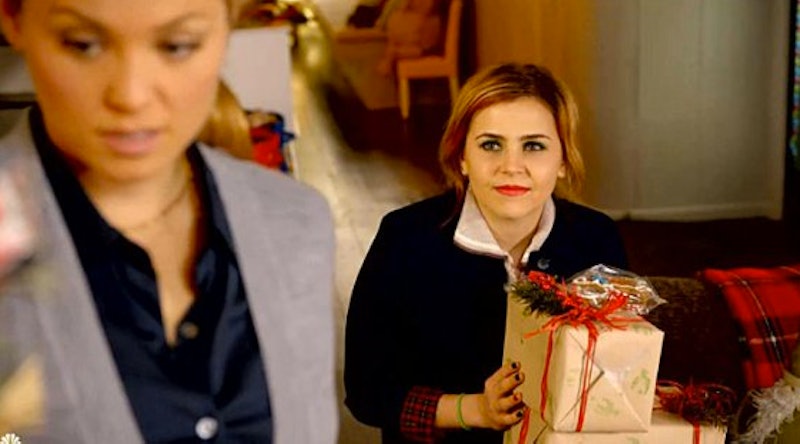 NBC's Parenthood is notorious for its ability to make every viewer even tangentially invested in its characters cry. Of sadness, of joy, of over-relation — you name it, we've cried about it when it comes to Parenthood. But Parenthood shouldn't just be discussed for its frequent but worthwhile emotional manipulation — though it is obviously quite good at that — but for something else it is rather covertly skilled at: creating a mentally and emotionally diverse cast of characters, never ever to be confused with one another, each complex and flawed in their own ways.

This is, of course, something that almost all scripted shows aim at in some way — but as anyone who's ever watched Glee can attest, not all succeed to the same degree. Parenthood is underrated in a large variety of ways, but one of the most glaring of these ways is definitely the strength of its ensemble. And while both the ladies and the men in the ensemble are nice, there's a respectable range of female humanity going on in this show. So, yes, we all should be paying more attention to Parenthood.

The series has a lot of female characters — from Braverman matriarch and aging hippie Camille, flighty single mother Sarah, and bossy ex-dancer Jasmine to dedicated and sometimes stodgy Kristina. But the ones we're talking about — the ones who were the focus of Thursday's episode — are the two characters on opposite ends of the family pole: Amber (Mae Whitman) and Julia (Erika Christensen).

Case in point: Amber, in Season 1, was a rebellious teenager who'd get in trouble for sex and drugs and rock 'n' roll, but who was trying to better herself in small but important ways; Julia, on the flip side, was the powerhouse attorney who had multiple in-episode stories revolving around her aversion to rebellion of any kind, and for whom sneaking a puff of marijuana with her siblings was the high point (no pun intended, but pun appreciated) of adventure.

It's been interesting to watch these two characters grow as Parenthood has gone through its five seasons: Amber has always been an old soul struggling to live up to herself, climbing figurative mountains and backsliding multiple times into a dark side that people expect of her. She dresses differently than the others, changes her hair color often, connects with musicians and artists, and is emotionally intelligent in ways that get her noticed by everyone she works with. She's had affairs with politicians and gotten into drunk car wrecks, but she is always, always striving to live a life that feels true to herself.

Julia is also incredibly intelligent, albeit in a way that is more honed by law textbooks and school and lists. She has a husband and a family, and has been relatively settled in a lot of ways for the majority of the show's run — until the moment in Season 4 when she walked away from her job. Now that the dust has settled on being a housewife, Julia is starting to realize what that career she left behind meant to her — and how incredibly, overwhelmingly lost she is without it.

Julia and Amber are in an interesting place this season, because they're both somewhere that we've never seen them before: Julia's place this season is where Amber usually is. It's a role reversal that speaks to how well this show knows its characters and how to mess with them.

Julia in Season 5 has no idea what to do with herself. She has no idea who or what she wants to be — or rather, she knows who she wants to be, but she has no idea how to be that person. And so, she rebels. She develops a crush on a man who is not her husband — Ed Brooks, being the Bob Little of this season — and projects her internal fight with herself on her parents. This is what Amber's been doing since day one, but now it's Amber who is settled.

And seeing Amber settled is a surprising, refreshing, and weirdly scary sight. It's beautiful, but it's tentative — Amber doesn't know how to carry herself with a new identity. (Much like Julia.) Amber, as previously mentioned, has always been an old soul, but the world has never treated her as a mature entity.

Where Parenthood will go with these women is, of course, yet to be seen — will Julia will ever actually cross that line and have an affair with Ed Brooks? Will she ever find a place in her world again? Will Amber marry Ryan, or will something develop with the charming new drummer the show introduced this episode? Who knows? Maybe this season will end with Amber coming out as a lesbian and Julia running for president.

So what do we know? We know we've seen showrunner Jason Katims do magic before in Friday Night Lights — so we know that these characters are in good hands.

More like this
Twitter Has *Many* Thoughts On Amber & Ikenna’s Dumping From ‘Love Island’
By Frances Stewart
What Is the Net Worth Of Each 'Stranger Things' Season 4 Cast Member?
By Hugh McIntyre
20 Photos Of "Beefy" Jeremy Allen White To Tempt You To Watch 'The Bear'
By Radhika Menon
Everything To Know About The Flash Season 9
By Brad Witter
Get Even More From Bustle — Sign Up For The Newsletter